“THE LIGHT BETWEEN OCEANS” 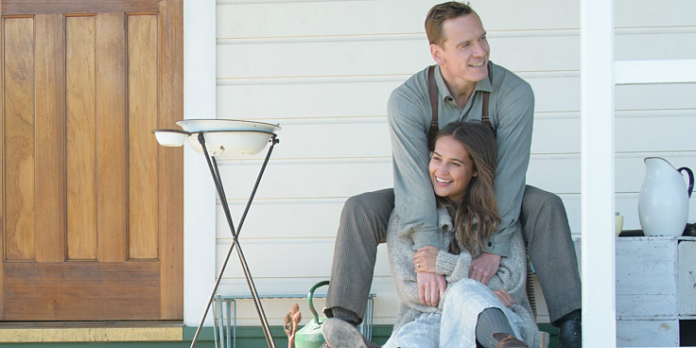 THE STORY – A lighthouse keeper (Michael Fassbender) meets the daughter (Alicia Vikander) of the school’s headmaster and is immediately captivated, and they are soon married and living on the island. Their happiness is marred only by their inability to start a family, so when a rowboat with a dead man and infant girl mysteriously washes ashore, Isabel believes their prayers may have finally been answered. As a man of principle, Tom is torn between reporting the lost child and pleasing the woman he loves.

Despite a few overly serious dramatic cues in the final act of “The Light Between Oceans” director/writer Derek Cianfrance remains a powerful force in the filmmaking world. He previously crafted the more effective heart-wrenching drama “Blue Valentine” then followed that up with “The Place Beyond The Pines” which marked a mature step forward for him. Now with “The Light Between Oceans” Derek goes straight for the heart with this period melodrama featuring two dramatic performances from Michael Fassbender and Alicia Vikander. However, Derek’s presentation of the material leaves viewers feeling emotionally numb by the end of this over two-hour picture.

Tom Sherbourne (Michael Fassbender) is an army veteran from World War I who is looking for a life of solitude after dealing with some traumatic experiences during the war. He retreats to the edge of the coast to be a lighthouse keeper where he meets Isabel (Alicia Vikander), the school headmaster’s daughter. They quickly fall in love with one another as Tom finds peace and happiness in his relationship with Isabel and the two soon become married. After enduring two miscarriages Isabel is about to give up hope when one day a small boat approaches the shore with a dead man inside and an infant baby still alive. Tom and Isabel decide to lie and keep the baby for themselves to raise with loving care until years later, the baby’s real mother Hannah (Rachel Weisz) enters the family’s lives.

Both Michael Fassbender and Alicia Vikander met on the set of “The Light Between Oceans” and fell for each other during the making of the film. That true to life feeling of adoration is felt through every frame of the film as both Tom and Isabel quickly fall for one another, get married and move off to the coast to start a life together. That bond between them is what carries them through all of the hardships they endure throughout the film and it is the film’s saving grace for starts to become a sinking ship by the film’s third act. The film also features a beautiful (Yet obtrusive at times…more on that in a moment) score from the great Alexandre Desplat and striking cinematography from Adam Arkapaw, who is quickly establishing himself as one of the better cinematographers working today.

As a writer, Derek Cianfrance adapts the novel from which the film is based with love and care. All and all his writing is in fine form but his directorial tendencies, however, lays the drama on thick and hard as every moment and dilemma of grief and pain is asked to be felt by the audience. There’s even a sequence in the film where Hannah’s backstory is shown instead of told to the audience. This method of constantly showing and thus pummeling the audience into despair is the film’s downfall as it loses its subtlety the more it drags on.

“The Light Between Oceans” means well and I’m sure it will tug at the heart strings with confidence as it tries to wring every ounce of emotion out of the audience. Derek Cianfrance makes some good choices in his writing and direction and some, not so good choices. The film remains beautiful to look at and Fassbender and Vikander both give it their all. However, Cianfrance asks too much of his audience without properly guiding them through the process. All of the quickly edited montages soon lose their power in trying to build a foundation for our emotional investment with the characters that when it all comes crashing down, its too much too fast leaving us all drained by the end.