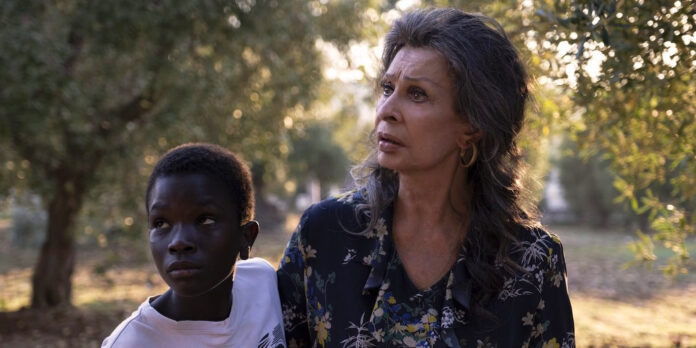 THE STORY – An aging Holocaust survivor forges a bond with a young immigrant from Senegal who recently robbed her.

​​​​Sophia Loren is an on-screen legend who has been acting for more than 70 years. In 1961, she became the first actress to win the Oscar for Best Actress in a foreign language film (“Two Women”). Any time she appears on-screen it’s a cause for celebration. The last time we saw her in a feature-length film was the 2009 musical “Nine” and while that film was a disappointment in man regards, she has returned to the screen for the first time in 11 years with her latest film “The Life Ahead.” A star vehicle for Loren and the second adaptation of the novel which it is based on (the 1977 adaptation, “Madame Rosa,” won the Academy Award for Best Foreign Language Film), “The Life Ahead” is a modest but good film mostly because of Loren’s talent and on-screen presence.

Taking place in modern-day Italy, Mohamed (Ibrahima Gueye) or “Momo,” is a troubled 12-year-old boy who steals from Madame Rosa (Sophia Loren), a former prostitute and Holocaust survivor who now runs a daycare. Momo’s current guardian (Renato Carpentieri) determines that it might do him some good to stay with Madame Rosa temporarily until he can find him a new home. Madame Rosa reluctantly allows Momo to stay with her for two months. Along the way, she learns about his past as an Orphan from Senegal. Momo learns about her past as well, as the two bond over their unique identities and prepare for what life has ahead for both of them.

Directed by her son, Edoardo Ponti, Sophia Loren is guided to one of the best performances she’s given in decades as Madame Rosa. She’s a tough and commanding female figure who has lived a traumatic life but keeps on pushing forward despite the horrors and hardships she’s faced. She instills this courage in the children she looks after as well and as great as Sophia Loren is, Ibrahima Gueye is the one who really stands out the most in “The Life Ahead” in what is his debut role. A tough on the outside but innocent and broken soul on the inside, Momo has his whole life ahead of him but has total disregard for how he’s living his life now. The pairing of Loren and Gueye is the beating heart of the film, as each comes to understand one another’s pain at opposite ends of the human life timeline and it’s their work which elevates the film from being something unmemorable to something special.

If there’s any drawback to the film, it’s that outside of the two main characters and their central performances, the film is rather unremarkable in how it is shot, edited and made overall. It’s a very small film that doesn’t convey much that we haven’t seen before. If it’s just a star-vehicle for Sophia Loren to deliver one final great performance, then “The Life Ahead” gets the job done but otherwise, I fail to see where else this film makes an impression. There is the inclusion of trans actress Abril Zamora, who does a wonderful job in her role as Madame Rosa’s friend and neighbor in her building. Her sexuality and gender are never a point of conversation in the film nor is it an important plot element, so I appreciate the film taking the consideration to cast her in the role. But outside of that, “The Life Ahead” doesn’t have much else to provide. There is a subplot with Momo working for a local crime boss that goes nowhere and don’t even get me started on the horrifically rendered CGI lion that Momo envisions in his dreams. It’s not good.

“The Life Ahead” features two outstanding lead performances from one star who is closer to the end of her life than to the beginning and one who is closer to the beginning of his life than to the end. They’re the reasons to see this beautiful but altogether simple film. 11-time Oscar nominee, Diane Warren has a gorgeous song which plays over the credits which may help to elicit even more emotion from the viewer but only real cinephiles and Oscar fans will find much value in what “The Life Ahead” has to offer.