The Last Temptation Of Gawain 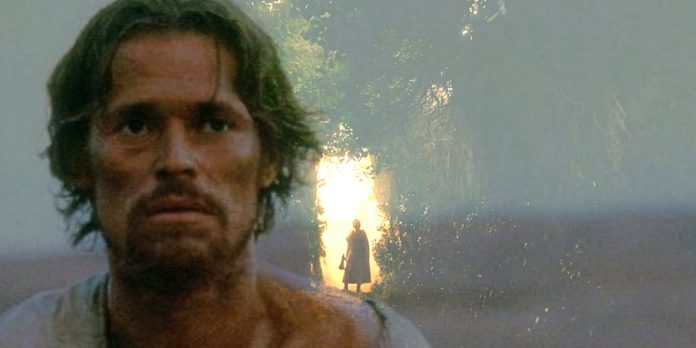 ​By the very end of “The Green Knight,” it is incredibly clear that it doesn’t owe its greatest debt to the original poem or Arthurian legend in general. Even if writer/director David Lowery didn’t directly intend to make it a dead ringer for another radical retelling of an ancient legend filmed in the late 80s, there is no mistaking just how indirect the similarities are – and not just in its final act.

If it wouldn’t have virtually spoiled the entire movie, “The Green Knight” could have just as easily been called “The Last Temptation of Gawain,” which is basically is even without the official title. In retrospect, it is quite obvious how much “The Green Knight” owes to Martin Scorsese’s retelling of “The Last Temptation of Christ,” before its final act homage to Christ’s famous and infamous “What if?” fantasy ending ends any doubt.

“The Last Temptation of Christ” deviated from the established story of Christ to paint Him as a doubt-riddled man who resisted His destiny, to the point of leaving the cross and starting a family in his last temptation. For that premise, it was considered blasphemous before anyone even saw it since literal religions have been based on the idea of Christ being above doubt, fear, or desire as He gave His life for mankind. This made Nikos Kazantzakis’s original novel and Scorsese’s adaptation a controversial challenge to that legend, to say the least. The lore of King Arthur isn’t quite that powerful, but it is based on the same principles of absolute purity and heroism that few normal humans could live up to. There have been some morally gray versions of the adventures of Arthur, Lancelot, Guinevere, and Camelot, none of which inspired a Last Temptation kind of backlash. Nevertheless, like with the story of Jesus, the most popular Arthurian legends are usually clear tales of heroic knights, brave warriors, and protagonists above temptation. Sir Gawain and the Green Knight is somewhat different, as the original poem tells of a knight who strikes down the magical Green Knight, is ordered to face him again a year later to suffer an equal blow of his own, and flinches when the time comes before being absolved of his dishonesty and fear. Despite some wrinkles to the traditional image of Arthurian knights, Gawain is still held up as a heroic figure at the end, if a fallible one.

Lowery’s adaptation of “The Green Knight” goes above and beyond those wrinkles to present Gawain as a full-blown cautionary figure about the dangers of ambition, envy, deceit, and false faces. And like Jesus in “The Last Temptation of Christ,” once Gawain sees how running away from his destined, deadly fate leads to complete devastation, he, at last, accepts the sacrifice he must perform to avoid it all. Lowery’s Gawain is hardly a Jesus-like figure before his final vision and temptation, but similarities still persist. In retrospect, the first big clues should have been how the story begins and then ends on Christmas Day, to say nothing of Gawain having a prostitute as his main forbidden love interest. And like Jesus, Gawain struggles to live up to having an all-powerful Godly figure in his family – though King Arthur is merely Gawain’s uncle while Jesus’s Godly figure is God the Father Himself. Yet while Jesus wrestles with the weight of the world and His destiny, Gawain actively wishes to have a grand story and legend of his own. That envy and self-imposed inadequacy drives him to challenge the Green Knight, cut off his head, and secure his own legacy at the price of his potential death a year later. When the time comes to meet the Green Knight again, Gawain’s travels along the way serve as his own version of Jesus’s wandering through the desert, though he is much more vulnerable to the temptations around him.

Gawain’s honor and mettle suffer several blows in this trip, from begging for his life to a gang of robbers, to asking about payment before recovering the head of a spirit, to a graphic encounter with a castle Lady who resembles his love interest, and to lying to the castle’s Lord in order to keep a supposed magical sash of protection. By the time he gets to the Green Knight himself, it isn’t a massive surprise that he ultimately runs away before getting his head cut off, but it is a significant change to the original story. Just as “The Last Temptation of Christ” altered the story of the crucifixion so Jesus could change his fate, Lowery’s version of “The Green Knight” alters its source material’s long-held ending so that Gawain can experience a last temptation of his own. Yet, the changes to “The Green Knight” are more radical in a way since Gawain didn’t die in the original poem and was ultimately declared blameless for his fear. In Lowery’s vision, Gawain not only lives and is hailed for the heroism he hasn’t truly earned; he is proclaimed King Arthur’s successor. But the false foundation of his reign cannot be overcome, as he casts out his lower-class lover after she gives him an heir, sees that heir die in battle, and sees all of Camelot fall under his regime.

The echoes of “The Last Temptation of Christ” ring out to an ear-piercing degree in this segment, as Gawain’s choice to live instead of die dooms humanity all around him, just as it did when Jesus gave into his last temptation. Yet while Jesus was led astray off the cross by Satan himself in the form of a little girl/false angel, Gawain runs away from the Green Knight’s ax all by himself, although a fox with the voice of his mother does try to lead him off beforehand. In the original poem, the Green Knight and Gawain’s other temptations were manifested by his mother, Arthur’s sorceress sister Morgana le Fay. “The Green Knight” does show Gawain’s mother conjuring the knight and leaves in other hints of her influence through Gawain’s travels. Yet, they are primarily ambiguous and left to interpretation here. For the most part, however, Gawain’s ambition, frailty, and weaknesses are his own worst enemy more than any magical puppeteer. But like “The Last Temptation of Christ’s” Jesus, when Gawain comes face-to-face with the horrors he has unleashed by running from his fate, he is sent back to meet it all over again. Just as Jesus accepts his death at long last in order to redeem mankind, Gawain accepts his death to spare Camelot. Of course, Gawain will not be worshipped for his sacrifice like Jesus or revered as a hero like King Arthur and his most famous knights – yet in the end, this finally no longer matters to Gawain. Jesus was a hero for dying and giving humanity a second chance, while the heroism of Gawain’s death in “The Green Knight” comes mainly from sparing Camelot of his future rule. It hardly makes him a figure worthy of Jesus, yet like the Jesus in “The Last Temptation of Christ,” Gawain becomes a real hero not just for accepting what he is, but what he isn’t. Just as Jesus ultimately realized he wasn’t meant to be a man, Gawain realizes right before it is too late that he wasn’t meant to be a great hero or a leader – and accepts his end before he can take Camelot down with him.

“The Last Temptation of Christ” courted backlash and protests for presenting a more human and fallible Jesus, yet through that lens, the measure of his sacrifice shone more powerfully than ever. “The Green Knight” is hardly as controversial for showing a more morally grey and perhaps less honorable angle to Arthurian times. Yet through this more complex human lens, a different and possibly more powerful side of heroism is shown than in the clear cut and one-dimensional takes on the legend. Nowadays, seeing someone who finally chooses not to rise to power by hiding his limitations, and letting him doom an entire land with them, is more aspirational and perhaps heroic than a more traditional tale of an upright and almost inhumanly valiant knight. Likewise, perhaps seeing a Jesus who fell from His pedestal, only to rise again when He saw what it cost Himself and the world, has been more resonant for some viewers in the last three decades than more straightforward – and in some cases, far more violent and hateful – retellings of Christ’s sacrifice.

The stories of Christ and King Arthur aren’t exactly the same, yet they may well be the most influential stories of the last 2,000 years. They are both centered on aspirational and usually almost flawless figures, have influenced how heroism and sacrifice have been judged for centuries — and weirdly enough, have both inspired classic Monty Python movies that comedically shred their legends. On the other side of that coin are “The Last Temptation of Christ” and now “The Green Knight,” which are now spiritually and structurally linked together in their revisionist takes on the greatest stories ever told. Whether Lowery meant to link them together or not is perhaps meaningless, especially since both movies show that legends are usually judged more importantly than pure fact.

Ending movies with “What If?'” third acts and virtual dream sequences is a tradition that goes back to “It’s A Wonderful Life” and was even used to end “The Twilight Saga.” In that regard, “The Green Knight” may not be terribly original, even if “The Last Temptation of Christ” is cast aside. But together, they uniquely show that such a formula can still shed new light, messages, and even more profound meaning on some of the most oft-told stories and legends of all time.

​Have you seen “The Green Knight” yet? What do you think of this comparison? Let us know in the comments section below or on our Twitter account.