“THE LAST LETTER FROM YOUR LOVER” 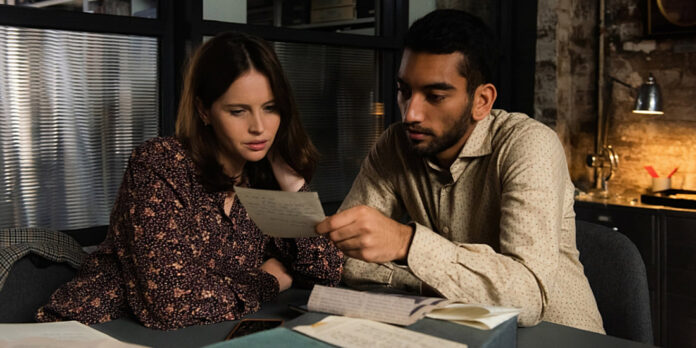 THE STORY – After finding a trove of love letters from the 1960s, a journalist sets out to solve the mystery of a secret affair.
​
THE CAST – Felicity Jones, Shailene Woodley, Callum Turner, Nabhaan Rizwan, Joe Alwyn & Ncuti Gatwa​

Fans of romantic dramas will be pleased because “The Last Letter From Your Lover” is a solid new entry for the genre. Nick Payne and Esta Spalding adapted Jojo Moyes’s 2012 novel for the screen, which follows two women in different timelines. Directed by Augustine Frizzell, the film presents two very different couples, both hoping for a chance of a happy ending.

The film begins in the 1960s, with Jennifer (Shailene Woodley) and Laurence (Joe Alwyn) arriving home, clearly uncomfortable with each other. Jennifer has lost her memory and gained a scar on her face in a recent car accident and is unsure how to behave within her life — or how to feel about it. Laurence is a wealthy businessman who is stern and controlling of his wife. Meanwhile, in the present day, Ellie (Felicity Jones) is a journalist who avoids romantic attachments. A piece she’s writing for the paper brings her to the archives, where she meets Rory (Nabhaan Rizwan), a straight-laced archivist whose dedication to the rules annoys Ellie. But as the two start to spend time together, they bond over the difficulties of modern romance and get emotionally invested in the mysterious love letters they’re finding.

However, the film is at its best in the flashbacks to six months earlier in the 1960s timeline as it explores the romance that led up to Jennifer’s car accident. Anthony (Callum Turner) is a journalist assigned to interview Laurence, who is nearly as dismissive of him as he is of his wife. Anthony and Jennifer start off on the wrong foot, but soon sparks fly between them. When Laurence is called away for business, the pair spend more time together. It’s remarkable how easy it is to root for them as a couple as we see Jennifer come to life in Anthony’s presence. However, this bliss can’t last forever as we come closer and closer to the car crash that we know will take Jennifer’s memories from her. Ellie and Rory are getting closer to unlocking the secrets of the letters they’ve found with little idea of what an influence it will have on the present.

Most of the cast give solid, if not spectacular, performances. Alwyn is appropriately eye-roll-inducing as the career-focused, sexist Laurence, whereas Turner is absolutely charming as Anthony. After seeing him in more cad-like roles in period dramas like “War and Peace” and “Emma.,” it’s refreshing to see him play a softer character. Despite her character not being as interesting, Jones lights up the screen whenever she’s on it. Unfortunately, Woodley feels miscast. She doesn’t blend into the period setting, nor is she entirely convincing as a high society girl. Jennifer feels like a character who should be introspective, which Woodley isn’t able to bring across.

The costumes by Anna Robbins (previously known for her work on both the “Downton Abbey” series and film) are lovely, both in the modern period and the 1960s, from Jennifer’s headscarves and gloves to Laurence’s well-tailored suits. The music is another highlight from Daniel Hart’s dramatic, sweeping score to the 1960s songs used throughout, which help give a sense of the time period.

“The Last Letter From Your Lover” is sure to please fans of period romantic dramas, like “The Guernsey Literary and Potato Peel Pie Society” or “The Age of Adaline.” It’s easy to get impatient with the modern timeline because the 1960s part is much more compelling, and we’re waiting to see how Jennifer ended up in the situation we see her in at the beginning of the film. While this film might not be a masterpiece, it was all too easy to get swept up in Jennifer and Anthony’s story and to find myself actively rooting for them.