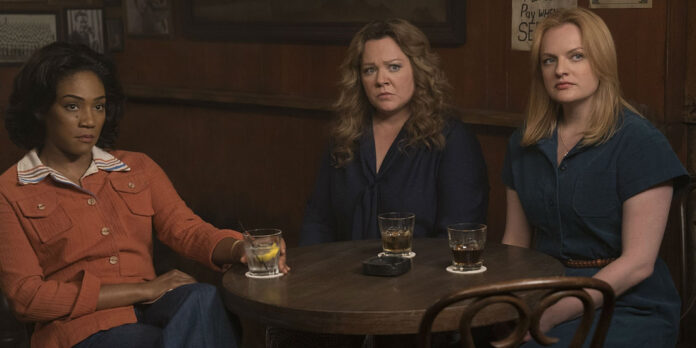 THE STORY – Between 8th Ave. and the Hudson River, the Irish mafia runs 20 blocks of a tough New York City neighborhood known as Hell’s Kitchen. But for mob wives Kathy, Ruby and Claire, things are about to take a dramatic and radical turn. When the FBI sends their husbands to prison, the three women take business into their own hands by running the rackets and taking out the competition.

​​There has never really been a short supply of films that take a keen look into the criminal life of gangsters. Many great efforts have been put forth by talented filmmakers, but the observation of how incredibly male-centric these stories are cannot be denied. It does not necessarily take away from the enjoyment of these films, but it does provide yet another reminder of their limited scope in perspective. “The Kitchen” is a film that attempts to tip the scales of that balance by providing a story that is completely entrenched in the perspectives of strong, capable women. Unfortunately, these efforts do not live up to their potential, and what is delivered is a film of many missed opportunities to create something truly engaging.

The setting places itself in the late 1970s in New York City, specifically in Hell’s Kitchen. Three local gangsters have just been arrested, leaving their home lives in shambles. Melissa McCarthy, Tiffany Haddish and Elisabeth Moss play Cathy, Ruby, and Claire, respectively. They are the wives of these men who take it upon themselves to apply themselves to their husbands’ criminal enterprise in order to support themselves. They aggressively seize control from the male-dominated power structure around them and manage to control their own criminal empire. Ambition soon becomes a driving force that causes tension among them, and their alliance becomes more delicate as their power grows.

There’s a lot to admire in terms of what is attempted here by writer-director Andrea Berloff. It’s an opportunity to fix a lens on a type of story that is rarely seen, and there are many elements to the film that attempt to engage with this idea. However, the script is the biggest failing here. The plot never feels constructed in a manner that supports a natural progression in the story, leaving the setups to feel quite accelerated and the latter half of the film to suffer from a slow and dull pace. These characters all have the foundations to make them compelling, but their arcs feel half-baked. There are moments when the film finds a spark of life, but they do not occur as often as one would like.

Berloff also makes her directorial debut here, and much like her screenplay, the results of decidedly mixed. There is a good sense of an authentic atmosphere of the time period, and there is a welcoming presence of intimacy she manages to create with many scenes featuring these characters. However, there is also an awkwardness to the filmmaking, particularly in the way this film is edited. There is an unnatural rhythm that is developed, and it causes the film to lose momentum in many spots. Her efforts manage to find interesting character moments, but it often comes with a feeling that the whole is less than the sum of its parts.

There is an incredibly capable cast here that is assembled, and it’s arguably the biggest saving grace of the film. McCarthy knows how to command a scene that requires dramatics with hints of comedy, and she is quite an engaging screen presence. Haddish doesn’t always land in every scene, but she perfectly captures the plotting nature of a woman whose outsider status has led her to think smarter than her adversaries. Moss, for my money, is the standout of the pack as she has arguably not only the most emotional material to work with, but also has the closest thing approaching a character arc. Unfortunately, as accomplished as these women are, they never share believable chemistry with each other and it makes their storylines feel oddly disconnected. This contributes to the film’s pacing issues and makes the story their participating in feel less cohesive.

The supporting cast also has some great players. Domhnall Gleeson enters as a past associate turned muscle for the gang, and he provides a simple yet effective turn that presents both a sense of charm and imminent danger. The always delightful character actor Bill Camp delivers another entertaining performance as a rival mob boss who plays on several layers of villainy that make him so fascinating to watch. Margo Martindale is the Ruby’s venomous mother-in-law, and while not given much to do, she makes the best impression she can. Same goes from the husbands, particularly Brian d’Arcy James who manages to convey a great deal of emotion in their limited screen time. All the supporting players do a great deal to add to the enjoyment one can receive out of the film.

At the end of the day, the film is not a complete disaster, but it is a very underwhelming one. Considering the potential the film had to cast a very interesting light onto an often over-told story, there really isn’t that much that makes it entirely interesting. The plot isn’t constructed in a way that makes one invested in its developments, and that isn’t helped by a dull pace. At the same time, the performances do a lot to keep it afloat as best as possible, even when they are not being served well by the material. It’s a shame this film does not quite deliver on the promise of its premise, but it can still be seen as a noble effort that sadly comes up short.