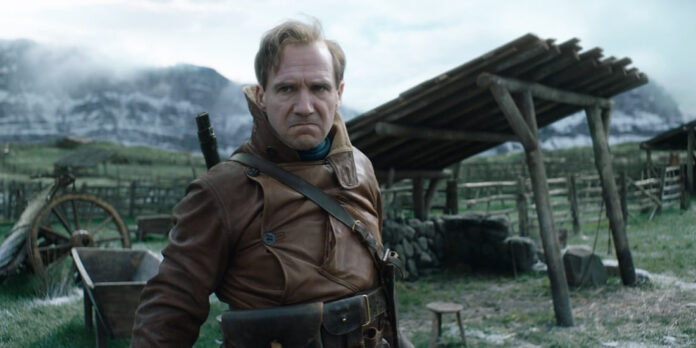 THE STORY – One man must race against time to stop history’s worst tyrants and criminal masterminds as they get together to plot a war that could wipe out millions of people and destroy humanity.​
​
THE CAST – Ralph Fiennes, Gemma Arterton, Rhys Ifans, Matthew Goode, Tom Hollander, Harris Dickinson, Daniel Brühl, Djimon Hounsou & Charles Dance
​
THE TEAM – Matthew Vaughn (Director/Writer) & Karl Gajdusek (Writer)​

​​​​​​The premise of the Kingsman series basically boils down to a version of James Bond: Suave British men in bespoke suits beating the ever-loving crap out of bad guys. There’s something that is inherently fun about that premise, but neither 2014’s “Kingsman: The Secret Service” nor 2017’s “Kingsman: The Golden Circle” fully make good on the promise of that premise. Leave it to the third film in the series, “The King’s Man,” to realize the key to making it work: Make it a period piece. Matthew Vaughn’s prequel is set during World War I, and something about playing with that period of history has properly energized the series, resulting in the first Kingsman film that is an unmitigated blast of entertainment.

“The King’s Man” is the story of a father and son, Orlando (Ralph Fiennes) and Conrad Oxford (Harris Dickinson). Conrad’s mother is brutally killed in an affecting prologue when gunfire breaks out on what was supposed to be a humanitarian charity visit. Orlando takes her dying wish that he protect their son to heart, and years later, when Conrad is of age for military service, Orlando forbids him from doing so in order to keep him safe. Never mind that the boy is well-versed in combat and self-defense thanks to intense lessons from Orlando’s man Shola (Djimon Hounsou), who accompanies both Oxfords on a trip to Russia to investigate a plot to kill Archduke Ferdinand being led by a shadowy cabal that includes the Russian advisor Rasputin (Rhys Ifans).

As you might have been able to guess from that last bit, a large part of the fun of “The King’s Man” comes from its gleefully ahistorical screenplay, which takes the historical roots of WWI’s beginnings and runs them through a blender. The result plays into the modern mania for conspiracy theories about shadow governments and war-mongering, but with a cartoonish twist exemplified by Ifans’s scrumptious, scene-stealing turn as the rabid Rasputin. Chewing the scenery as though his life depended on it, Ifans turns the dials all the way up, and the result is one of the most enjoyable villains in recent memory. Other twists to the historical record have a similar joy in how they are deployed to shock and delight the audience.

However, the most shocking thing about “The King’s Man” is Ralph Fiennes’s performance. Not the fact that he’s good – Fiennes has been one of our best and most versatile actors for years – but the ways in which he is good. Orlando is very much the emotional spine of the film, requiring Fiennes not just to kick ass in some clever, inventive ways but to filter all that action through a range of different emotional states. He does so with an elegance that makes it seem easy, even though we have evidence from decades of action films to prove that it isn’t. While he is going above and beyond what would be expected of most actors in this type of film, he never once condescends to either the part or the audience. He takes the role as seriously as any other he’s played throughout his illustrious career, always making clear that this is as much a story about a man learning to live again just as much as it is a rock ’em-sock ’em action-adventure. Fiennes’s firm grasp of tone is shared by the rest of the ensemble, which also includes a breezy Gemma Arterton as the Oxford’s maid/governess, triple Tom Hollander having a regal blast as King George, Kaiser Wilhelm, and Tsar Nicholas, and a delightful bit of mustache-twirling from Daniel Brühl as a German henchman.

At the helm of it all, Matthew Vaughn proves once again that he is one of the best directors of action working today. Each action sequence in the film has some fun twist to make it stand out, from the gleeful classical music accompaniment to the showdown with Rasputin to the shots staring at the barrel of Orlando’s sword/gun, and the varied comic beats are always perfectly placed. The film shares a somewhat snotty brand of humor with the first two films in the series. Still, Vaughn and co-screenwriter Karl Gajdusek have allowed the film’s period setting to inform the tone of the whole movie, lending the dialogue a rat-a-tat screwball feels with which the cast is clearly having a ball. The entire film is just fun in a way that not many movies are these days: It’s smart but not overly so, fast-paced but with plenty of time for dramatic character beats, and lets the dialogue be equally as important as the action. “The King’s Man” is funnier, more surprising, and more heartfelt than the first two films in the series, and if the team can keep up this level of quality in the future, then Mr. Bond may just have to watch his back.