​The History Of Disney’s Live-Action Remakes At The Oscars 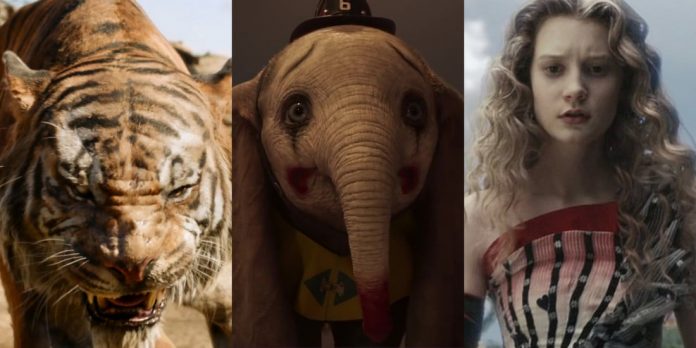 By Daniel Howat
​
Tim Burton’s “Dumbo” releases to theaters today, marking the first of (at least) four remakes of Disney animated features debuting in 2019. This new era of Disney mining through their catalog for revamped versions of old films largely kicked off in 2010 with the success of Burton’s own “Alice In Wonderland” reimagining. That film, though critically mixed, went on to gross over a billion dollars. Disney saw a goldmine and pounced, and has released six more live-action remakes since. Could “Dumbo” and the other 2019 remakes score at next year’s Oscar? Let’s take a look at the history of Disney remakes at the Academy Awards.

“Alice In Wonderland” may have kicked off this new era, but let’s not forget about the OG live-action remakes: 1994’s “The Jungle Book,” and the 1996 Glenn Close-starring “101 Dalmatians” (along with its sequel). While none of those three films made appearances at the Oscars, Close was nominated for Best Actress – Musical or Comedy for her legendary turn as Cruella DeVil.

But yes, for all intents and purposes “Alice In Wonderland” was the first in this string of remakes for Disney. The remakes have received three Oscars from a total of nine nominations. Only one of those seven remakes failed to receive an Oscar nomination (“Alice Through The Looking Glass”). All the nominations and wins came from only three categories.

“Alice In Wonderland” was a relatively easy choice to win the Oscar here after winning the Costume Designers Guild, Critics’ Choice, BAFTA, and more. None of the other films have repeated here.

Of the new additions to the series this year, Dumbo feels like it has the best shot. “Aladdin” may end up a mixed bag, while “The Lion King” has a distinct lack of costumes. The sequel to “Maleficent” could certainly surprise us here though.

Won: Alice In Wonderland
Nominated: Beauty and The Beast

This was the second Oscar that “Alice In Wonderland” won, defeating a formidable contender in “Inception.” Many predicted “Beauty and the Beast” could win Best Production Design in 2017, but it ultimately lost to Best Picture winner “The Shape of Water.”

Again, “Dumbo” and “Maleficent: Mistress of Evil” could make a play in this category. “Aladdin” and especially “Lion King” may prove too CGI-driven to compete in some of these categories.

Every film that has won the Academy Award for Best Visual Effects since 2008 was either nominated for Best Picture or nominated for at least one other Oscar. That is, except for “The Jungle Book.” Jon Favreau’s effects-driven adaptation was only nominated for the one award, which it easily took home. It’s an outlier among the other winners from the past decade. Surely Disney hopes to repeat this win with Favreau’s upcoming “The Lion King.”

“Alice In Wonderland” competed in this category against “Inception,” so it never stood a chance. “Christopher Robin,” on the other hand, was something of a surprise nominee last year, barely cracking the lineup. Up against “Avengers: Infinity War” and eventual winner “First Man,” it was never going to win.

With this year’s new adaptations, could Disney see nominations in new categories for this series? “The Lion King” will likely be the most financially successful of the group, but it’s entirely animated. The Academy may push back against this style. It’ll likely score a Visual Effects nomination (and possibly a win). Could it compete in Best Animated Feature? It’s possible, but yet to be seen. Even if it’s eligible, don’t expect the members of the Animation Branch to nominate it there.

Both “Aladdin” and “The Lion King” could compete in Best Original Song. Alan Menken teamed with Oscar-winning “La La Land” songwriters Pasek and Paul for at least a couple new songs for “Aladdin.” The music branch seems to have welcomed the young Pasek and Paul into their ranks with open arms. Menken has, of course, won more competitive Oscars than any living person, and he’s one win away from tying the overall record (living or dead). This group makes a strong case for a nomination.

Elton John and Tim Rice paired with Beyoncé to write an end credits song for “The Lion King.” Who wouldn’t want to say the phrase “Oscar Winner Beyoncé”? Additionally, along with “Rocketman,” this year could put Elton John front and center.

What about acting categories? Or could any of these films crack the Best Picture lineup? It’s highly unlikely. Still, Disney got a taste of the gold for the first time in years with “Black Panther,” and surely they want more. If “The Lion King” makes over a billion dollars, as it’s expected to, perhaps the love of the film will propel it throughout Oscar season. Still, don’t bet on it.

Disney knows what they’re doing. Mining their own back catalog and creating new versions of already beloved films is a pretty solid business plan, and it’s paid off handsomely. As far as the Oscars, they may stay relegated to the craft categories for the time being, but who would’ve bet that a Marvel film would be a solid Best Picture contender? Anything can happen.

So what do you think? Do you think Disney will do well at the Oscars this year with their upcoming live-action films? Let us know in the comments section below or on our Twitter account.