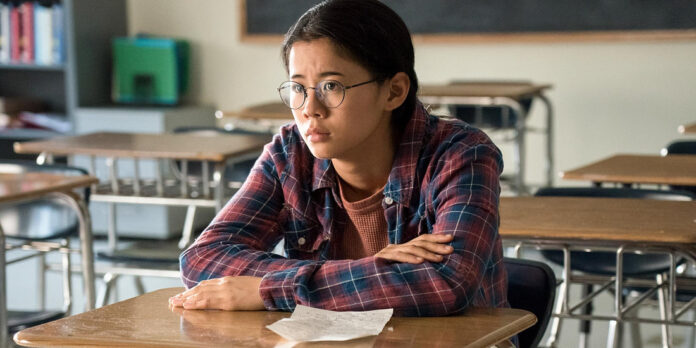 THE STORY – A shy, introverted student helps the school jock woo a girl whom, secretly, they both want.
​
THE CAST – Leah Lewis, Daniel Diemer & Alexxis Lemire

“The Half of It” might be Netflix’s latest teen film, but it stands out from the rest of their original coming-of-age romantic comedies. It’s writer-director Alice Wu’s first major film since “Saving Face” (2005) and is centered around a young Asian lesbian teen. The plot is a sort of modern “Cyrano de Bergerac,” but executed much more cleverly than Netflix’s previous adaptation, “Sierra Burgess is a Loser.” (Why Edmond Rostand’s story has become a popular trope for teen movies is a mystery.) ​

Ellie Chu (Leah Lewis) is a nerdy senior in high school helping her dad run the town train station and selling essays to her classmates to earn extra money. Ellie and her father stand out in the fictional small town of Squahamish where there don’t seem to be any other Asian people. When the girl shy jock, Paul Munsky (Daniel Diemer), asks Ellie to help him write a letter to his crush, Aster Flores (Alexxis Lemire), she’s reluctant to agree – but she needs the money to help pay the bills. She soon becomes invested in the project, not just because of her blossoming friendship with Paul, but also because she harbors her own crush on Aster.

“The Half of It” stands apart from the average teen rom-com, and even seems to acknowledge some of its tropes. For example, the popular girls at the school who befriend Aster are hilariously homogeneous in matching outfits, and Aster’s popular, handsome boyfriend, Trig Carson (Wolfgang Novogratz) is a caricature of the self-absorbed jock. But for the most part, the students, and particularly Ellie, look like actual high school kids which is strangely uncommon in this sort of film.

While a lot of modern teen rom-coms take place in suburbia, but this one is set in a small town and delves into the issues of living there like social life being defined by the church, the homogeneity of the population, and the difficulty of moving away. The cinematography by Greta Zozula also elevates “The Half of It” from what you might expect from the genre. There are some really beautiful shots, especially the one of Aster and Ellie together in the hot spring. (If you’ve seen it, you know exactly what I’m talking about.)

The thing that takes this film from good to great, however, is the friendship that develops between Ellie and Paul. There are too few male-female friendships portrayed on screen that remain platonic, and Ellie and Paul’s relationship feels very organic and convincing. They’re an unlikely pair: Paul is a simple, but determined and thoughtful jock while Ellie is a gifted writer who’s working hard to provide for her and her father. However, they both dream of more than Squahamish can provide: Paul wants to change his family’s sausage factory recipe while Ellie feels she can’t go to the college she wants because of her need to care for her father. Lewis and Diemer have fantastic chemistry together and their performances sell the whole film. Diemer has a particularly poignant scene with Collin Chou as Ellie’s dad as well. Lewis has a slew of TV and TV movie credits to her name, but this is her first big film role and she seems poised to go onto bigger things.

The other best aspect of this film is its representation, not just in terms of sexuality, but also in culture and race. The family of the love interest, Aster, speaks Spanish at home, while Ellie and her dad speak Chinese. Furthermore, the film delves into how Ellie’s father has a Ph.D. in engineering, but because of his accent, he hasn’t been able to find a job other than being the station master of their train station. Perhaps it’s because writer-director Wu is Chinese-American and a lesbian herself that the film’s portrayal of a Chinese lesbian teen feels so authentic. “The Half of It” is also a fairly down-to-earth portrayal of high school, from the fashion to the clever inclusion of social media which defines the modern-day teenage experience.

The film’s real fault is that it’s overly ambitious and tries to take on too much. There are multiple plot points – Ellie’s musical talent, Paul’s reaction to finding out Ellie is also interested in Aster – that lacked real development and felt glossed over. The film also touches on religion in a somewhat brave way, but it doesn’t feel completely fully developed. It seems like some of the many storylines should have been cut in favor of fully exploring others.

In the film, Ellie says, “In case you haven’t guessed, this is not a love story.” It certainly isn’t a traditional high school romance, but it is a love story in other, perhaps more meaningful, ways: the love between Ellie and her father, and the platonic love between Paul and Ellie shine through. If the film feels a bit messy and overstuffed, then so is love itself as Ellie herself tells us. “The Half of It” is a beautiful and original coming-of-age story about making connections, friendship, and following your heart.