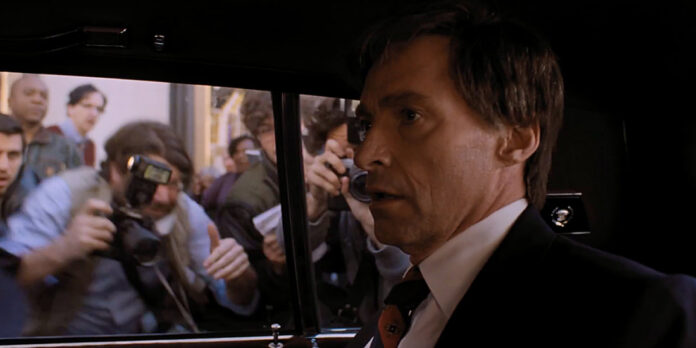 ​​​Even in his final speech publically withdrawing himself from his bid for the Democratic presidential nomination, Gary Hart (Hugh Jackman), whose campaign tanked in the less than three weeks after news broke of his extra-marital affair, defiantly advocated for his right to privacy and ardently defended his belief that a public servant should never fall under the sort of scrutiny reserved for celebrities in tabloid magazines. Jason Reitman’s “The Front Runner” nearly respects Hart’s entreaty, avoiding becoming the sort of deep-dive biopic that would’ve surely irritated the elusive former front-runner, and offering instead an examination of a post-Nixon political culture that draws expected parallels to our current “situation.”

In a Q and A at the Toronto International Film Festival, Reitman explained his intent to capture several perspectives of the same event, and the result is a film that is as interested in Hart’s campaign strategists, his wife (Vera Farmiga) and daughter, the various journalists following his campaign trail, as it is in Hart himself. Formally, “The Front Runner” is a departure from Reitman’s previous work, with more exciting camerawork and editing techniques employed to capture the multi-perspective nature of the story. This epic ambition, however, feels squeezed into its nearly two-hour running time, and its multiple characters are only ever limited to their relationship to the scandal, thus making the film simultaneously drag its feet through a number of half-baked storylines.

In one scene at Hart’s campaign headquarters, Hart makes a private telephone booth call where he has a suspiciously warm conversation with an anonymous interlocutor; at a distance, a journalist for the Washington Post, A.J. (Mamoudou Athie), and two campaign workers try to pick up what exactly is happening, and what might be at stake from their different corners of the room. “The Front Runner” offers a similar experience– multiple points of view directed towards a hazy object. None connect with Hart as they should.

Not to say Hugh Jackman fails at his job, so much as the camera keeps him at a distance, omitting actions of his that might be revealing (as in the consummation of his affair with Sarah Paxton’s Donna Rice aboard the aptly named “Monkey Business”), and settling instead for what comes across in his interactions with other people. Several of these one-on-ones are strong points for “The Front Runner,” namely Hart’s diner confrontation with A.J., and a climactic squabble between Hart and Bill Dixon (J.K. Simmons), Hart’s campaign manager. In probing Hart, it is all the more evident that he feels threatened, and that he is concealing something he knows will not fly with the American public. Jackman is convincing as the principled, but still greasy Gary Hart, a performance from a beloved actor that is impressive enough to establish Jackman as a contender for Best Actor during the upcoming awards season. Still, “The Front Runner” falls flat where something like “Primary Colors” (1998) soared, offering an impenetrable lead who we learn disappointingly little about through the course of the film.

“The Front Runner” does manage to pose some compelling questions, and leaves them in a state of ambiguity that gives the audience more to chew on than say, last year’s Steven Spielberg film “The Post.” In “The Post” of course, the responsibility of the press to print the news is sacred, especially in the face of a government with something to hide. “The Front Runner” examines a shifting culture and society’s changing expectations of its statesmen, all the while posing a figure whose personal views clash with these changing tides. Hart’s belief that “pop” ethics, i.e. superficial judgments of the personal lives of others should not apply to the public’s consideration of its representatives, is logically sound, yet we never sympathize with Jackman’s frustrating, defensive character. Likewise, A.J., the Washington Post reporter semi-responsible for Hart’s demise, internally struggles with the demands of his publication, the ramped up tendency of journalism to prioritize breaking news and public scandals, and his genuine belief that Hart is an impressive, extremely qualified candidate.

“The Post” posed ideas that were easy to rally behind given the dark ages we seem to live in, but what it lacked in thematic difficulty it made up for with a clean execution and a focused narrative, as well as of course, plenty of moments for its stellar cast to shine. “The Front Runner” is ambitious where “The Post” was not, but Reitman never finds his footing or gives his talented cast room to breathe, resulting in a rather gray, uninspired product. Unfortunately, “The Front Runner’s” appetite is bigger than its stomach.