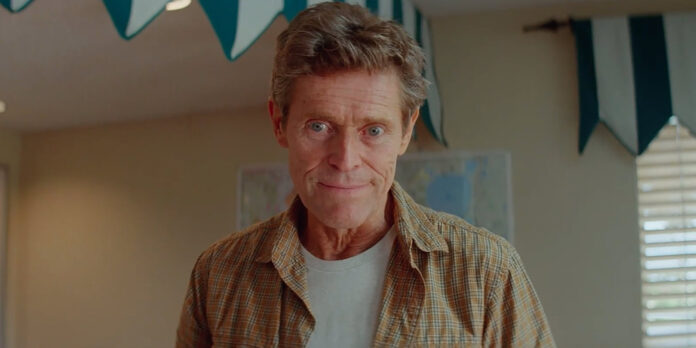 THE STORY – Halley and her 6-year-old daughter Moonee live in a motel that’s managed by Bobby, a man whose stern exterior hides a deep reservoir of kindness and compassion. Despite her harsh surroundings, the precocious and ebullient Moonee has no trouble making each day a celebration of life. Her endless afternoons overflow with mischief and grand adventure, while her mother soon finds herself exploring increasingly dangerous options as a way to keep them both alive.

There is a helicopter that continuously flies through the sky in “Tangerine” director Sean Baker’s new film “The Florida Project.” It’s a symbol of how the main character Moonee needs to fly away from her current circumstances and get a chance to start over before it’s too late and she becomes like her mother. We see the day to day life of Moonee and everyone she interacts with in her life. We see the downward spiral starting for her mother. We know how this will ultimately end. And yet, Sean Baker continues to surprise us.

Taking place in a small, purple colored hotel complex, “The Florida project” tells the story of a young, vulgar, loud and obnoxious child named Moonee (Brooklynn Kimberly Prince) who is the way that she is due to her upbringing by her also young, vulgar, loud and obnoxious mother Halley (Bria Vinaite). Moonee is not necessarily a bad person, unlike her mother who knows the consequences of her actions. Moonee, along with her friends Jancey (Valeria Cotto) and Scooty (Christopher Rivera), simply don’t know any better. Spitting on cars, lying to get money for ice cream, and even burning down abandoned buildings are all little steps that these children are taking on their journey’s through life. However, constant complaints from tourists and other nearby residents bring Halley and her daughter into conflict with Bobby (Willem Dafoe), the hard-working, good hearted manager of the building.

Acting as director, writer, producer, and editor, Sean Baker has not disappointed following his breakout independent (And shot exclusively on iPhone) hit “Tangerine.” His use of color, composition, and framing are all on display as he captures what may be a small distance (Perhaps a few miles at best) but to the main character Moonee, is her entire world. He captures the childhood innocence of these children with an artful eye. Patient, honest and at times difficult to watch, “The Florida Project” is not always an easy watch due to how deep the truths that Baker captures cut for us. The relationships feel totally real, which is why when Hayley’s behavior finally receives its reckoning, we know it is deserved but we are still heartbroken over what the consequences will be for her daughter and the friendships she has formed in the small hotel complex.

“The Florida Project” will receive a lot of criticism from people who find the characters barely watchable due to their vulgar and disrespectful behavior. For all intents and purposes, these characters are living in a totally different world than the most of us. They’re poor but not homeless as they struggle every day to hustle their way to make ends meet and pay rent. Moonee doesn’t fully understand what it means to be an adult but her mother doesn’t either. Both of them don’t understand that there are consequences to their actions. Their erratic and uncontrollable behavior is certainly off-putting and almost destroys the movie at times.

What ultimately saves “The Florida Project” from being an almost unwatchable film in this regard, is the before mentioned artistry of Sean Baker and the grounded performance by Willem Dafoe. The now 62-year-old actor has been around for a long time and he delivers one of his best performances as the audience’s stand-in character that notices the terrible behavior on display, is certainly fed up with it but also recognizes that the children cannot be blamed for their parent’s mistakes. If anything, he’s the best parental figure they’ve got. This is most evident in a scene where we see his character, Bobby, protect the children from an unknown stranger who may or may not have malicious intent. Such parental behavior is sorely lacking in the complex known as “The Magic Castle.” Well, if the hotel is a castle, then Bobby is king. He earns our love and respect through his hard work and decent soul. This doesn’t mean that Dafoe is all smiles throughout “The Florida Project.” He too has a breaking point with how much he can withstand Hayley and her actions. The results ignite the screen in such a way that only an actor like Willem Dafoe can provide.

Overlong as it may be and hard to watch at times, “The Florida Project” is a strong effort from Sean Baker. Filled with terrific performances from its cast, shot beautifully with colorful images and filled with occasional doses of humor, the film feels similar in tone to last year’s “American Honey.” Like that film, “The Florida Project,” captures a piece of America that is always fascinating and never fully easy to digest as we see both the ugly and the beautiful side of this tiny little world through a child’s eyes. The ending is one where it left me heartbroken yet full of hope that the cycles that hold us down can and will eventually be broken, provided we have the right support.