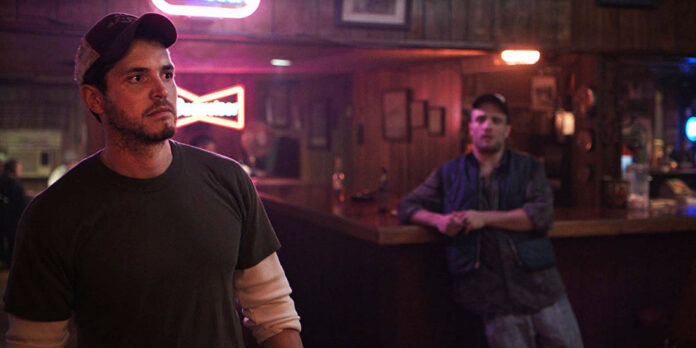 ​​There can be something exceptional about a story that takes its time to unfold. Getting the opportunity to sit with the environment just to absorb the surroundings can make the explorations all the richer. A more ponderous tone is often the window for deep reflection of themes and characters, which in turn can lead to some powerful moments of cinema. However, one must be mindful not to let the more insightful commentary pass by while the slow road is taken. It can be easy to let the introspection quickly turn to monotony, and the more intriguing examinations can fade away. Sadly, that is the fate befallen onto “The Evening Hour,” a dour character study that struggles to find depth in its plodding display.

Set in the mountainous regions of West Virginia, the film follows Cole Freeman (Phillip Ettinger), a nursing home aide in a small town. His life is mostly uneventful, living near his grandmother and enjoying his time with his girlfriend. He also happens to be a local drug dealer, supplying various residents with excess medication and making more money on the side. His idyllic balance is threatened by the arrival of Terry (Cosmo Jarvis), an old friend who’s come back to his old stomping grounds with the ambitions of setting up his own drug empire. This puts him in the dangerous crosshairs of a more insidious drug lord and forces Cole into dire circumstances that demands him to choose between two walks of life and suffer those consequences.

There is a laid-back approach to the direction from Braden King, which aims to take in the scenic majesty of the location and luxuriate in the multiple characters that reside here. The filmmaking can feel laborious, but it is also grounded in a way that feels appropriate for the serene setting with a rotten underbelly. However, that appreciation only goes so far when much of the film suffers from a tedious pace that forces a stagnant sense of momentum. The landscapes establish a sufficient mood, but one also finds it difficult to become completely engulfed in the storytelling by the visual aesthetics alone. King’s efforts are serviceable but do little to create an engrossing portrait.

The script by Elizabeth Palmore also fails to create a set of compelling characters to inhabit this story. The relationships between them are not dynamic, lacking the energy to make their interactions engaging and nuanced. Instead, their motivations are conventional, and the emotional catharsis weak. The plot’s motivating push forward often comes across as unfocused and disjointed, which either glosses over its shallow characters or grinds things to a halt when stiff backstory has to be thrown out. At its core, this is a tale of a man desperately seeking to better his life while being savaged by the sins he has committed. Unfortunately, that inherent tension is not exploited for more interesting examinations of character and theme, especially when engulfed by flat and wooden dialogue. Instead, it merely treads lightly in familiar commentaries without ever reaching for something more provocative.

There is a stoicism that Ettinger brings to the role that infuses a believable everyman quality. The performance itself leans more on the bland side, but he steers into the uncharismatic nature of the character and makes it effective for what it is. Jarvis has been extraordinarily impressive in other roles, but he is underserved by the material here. There are flashes of his intensity that make him an alluring presence, but it’s a more muted role that does not live up to his true potential. Most of the supporting cast feels undervalued, particularly Lili Taylor, as Cole’s estranged mother, who brings a warm aura that is not utilized enough. The only one who truly makes an impression is Michael Trotter as one of the protagonist’s suppliers. There’s a captivating energy he brings, full of devilish charm and tragic undercurrents, that makes him a fascinating performer. Things light up every moment he’s on-screen, and his turn is one of the few in the film that is truly profound.

“The Evening Hour” has the makings to be a thoughtful meditation on the paths one chooses in life and how to settle those consequences in the pursuit of something grander. There are elements in the filmmaking that emphasize this thesis, but the foundational screenplay is what inhibits most of the film’s success. The characters are not developed in an appealing method, dragging the pace to a laborious crawl. The story is blunt without ever mining a complexity to make it enthralling. The vast majority of the performances are not served by the material and make little impact, save for one notable exception. Unfortunately, this more contemplative exploration does not find itself creating a riveting piece of storytelling.