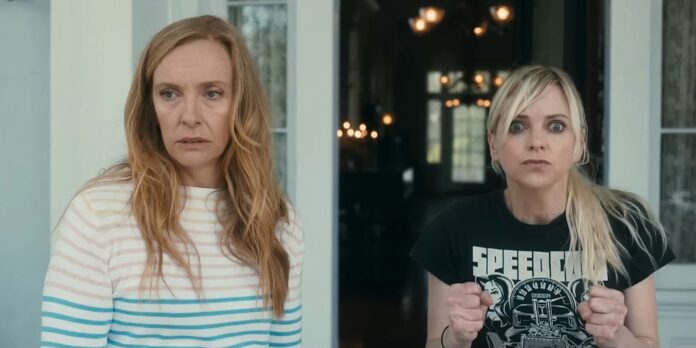 THE STORY – Two sisters try to win over their terminally ill, difficult-to-please aunt in hopes of becoming the beneficiaries of her wealthy estate, only to find the rest of their greedy family has the same idea.

Nothing will bring a family together quite like sharing good and bad times. But if you have a rich relative on the brink of death, those bonds can break easily, especially when every man and woman sees dollar signs. That’s certainly the case in Dean Craig’s raunchy comedy “The Estate,” which pins one wild relative against another as they try to get their hands on their aunt’s fortune.

It’s a topic that’s been covered in a number of ways over the years, like in Rian Johnson’s murder mystery “Knives Out” or the cut-throat HBO show “Succession.” But with “The Estate,” Craig doesn’t give us anything new. His approach to tackling a family fighting over an estate is as by-the-numbers as it gets. These movies always feature a wacky cast of characters who try to outdo each other to gain their relative’s love and affection, and we’ve seen that before. But there are committed and wild performances from the cast that offers a saving grace throughout the film.

Before all the estate planning begins, sisters Macey (Toni Collette), the sensible one, and Savanna (Anna Faris), the wild one, are two small-town gals struggling to make ends meet running their father’s cafe. Their personal lives aren’t that great either – they drive a beat-up car, Macey’s relationship with the sensitive Geoff (Gichi Gamba) is in a delicate spot, and there doesn’t seem to be much hope in sight otherwise. When they learn their cantankerous and wealthy Aunt Hilda (Kathleen Turner) is dying, winning over her admiration – and fortune – is just the thing they need.

When they arrive with open arms, ready to take care of their loved one, they realize they’re not the only ones with the same plan. Their cousins – the picture-perfect Beatrice (Rosemarie DeWitt) and the too-affectionate Richard (David Duchovny) – also come with pockets ready to be filled from their aunt’s estate. As one would assume, based on how simple and obvious the script is, they all get into wild scenarios to try to win her over, like keeping her well-fed, trying to set her up with an old flame, and making amends with estranged family members.

What really sells these scenes is the commitment each of the cast members brings to their role. Turner is the standout. She throws insults at her family members and really plays up the slapstick comedy with her illness. One scene in particular where she and her sister Diane (played by the underutilized Patricia French) try to reconcile their relationship gets the most laughs as it goes absolutely haywire, and they start shouting and fighting with each other. Just as Turner can insult anyone in this film, DeWitt also holds nothing back as she calls everyone around her a moron (well, she says much meaner things). Duchovny goes all-in as the annoying, creepy cousin who’s been obsessed with Macey all his life, and he’s totally unashamed to be who he is, like when he profusely talks about porn websites dedicated to cousin content. Faris, known for her outstanding work in the hilarious “Scary Movie” franchise, is always solid in comedies, and this movie is no exception. Collette takes a more toned-down approach compared to her costars and even her own performance as a money-hungry lifestyle guru in “Knives Out.”

The movie relies on its actors to make it enjoyable, but when you look deeper into the script, there’s not much else there. Most of these characters are written as two-dimensional cliches who aren’t relatable and don’t even seem like real people. One of its most significant omissions is how Keyla Monterroso Mejia’s character Ellen is not given enough screen time. As Macey and Savanna’s Dungeons and Dragons-obsessed sister, she’s as much of a hoot to watch as the leads. Macey’s romance subplot is also so surface-level that it’s entirely forgettable.

If audiences want to sit back and watch a brisk 91-minute comedy about people ripping into each other over money, “The Estate” is definitely one option to check out due to its fun performances. But if you want to see this same topic covered in more creative ways, there are plenty of other great works available.

<b>THE GOOD - </b>There are some pretty funny moments thanks to a committed cast, especially Kathleen Turner, Anna Faris, David Duchovny, and Keyla Monterroso Mejia, who go all in with their wild personas.<br><br> <b>THE BAD - </b>The story is very straightforward and doesn't seem to present anything new to its audience. Most of the characters are cliches or overlooked.<br><br> <b>THE OSCAR PROSPECTS - </b>None<br><br> <b>THE FINAL SCORE - </b>4/10<br><br>"THE ESTATE"