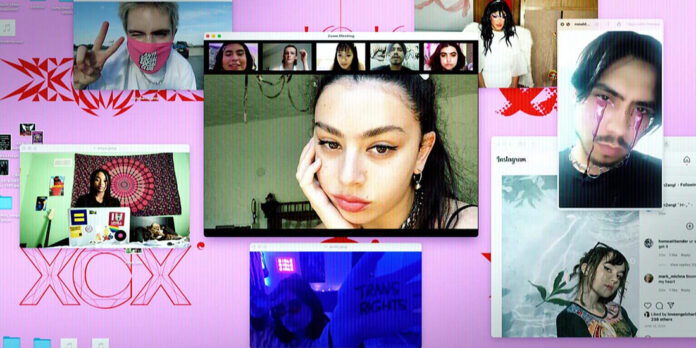 THE STORY – Charli XCX, a pop star in quarantine embarks on a whirlwind journey making an album in 40 days that tests her creative and emotional limits and unites a global community of vulnerable LGBTQ+ fans.

Despite all the ills of 2020, it was a time where people collectively came together, even if it wasn’t in the physical sense. It was during the lockdown that the 28-year-old singer and songwriter Charli XCX created her fourth album, “How I’m Feeling Now,” bringing her fanbase (affectionately known as the Angels and made up from a primarily LGBTQIA background) together and inviting them to help contribute by supplying illustrations, film footage, and their feedback. “Alone Together” chronicles Charli’s album from its inception to its release, making for a fascinating and insightful glimpse behind the scenes of crafting pop music. Watching this documentary is the comforting hug that we all need right now. Charli, along with directors Bradley and Pablo (Bradley Bell and Pablo Jones-Soler), and the Angels, all help us remember that we are all in this together. Therefore we need to support each other.

At the start of the documentary, we see footage from Charli’s 2019 world tour, and it’s a sad sting to remember how things were before COVID-19. There is a magical quality to Charli’s presence on stage. Her music may not be to everyone’s taste, but there is no denying the fact that she’s certainly full of talent and boundless amounts of energy and charisma. In the past, pop stars were meant to be fierceness and invulnerable, but Charli is very open and honest with her fans, revealing to them how she struggles with her confidence. She details in one scene how she’s “never very present or in the moment…nothing is ever good enough.” Something that many of us can probably relate to, this feeling of indecency and lack of self-esteem. To hear the pop star confess about her lack of confidence and struggles with constructing her own identity is quite likely the reason why so many young people connect with her.

We follow Charli as she spends lockdown in her L.A. house with her two managers and on-again-off-again boyfriend Huck (the couple has only spent 11 consecutive days with each other in the seven years they’d been dating). Like so many of us, the singer finds herself lost and eager to keep occupied during her time indoors. We have all faced this strange feeling of our entire world being turned upside down, being unsure of what the future holds in store, and an increase of anxiety hitting us. Through video diary entries, voice-over narration, and social media, Charli reveals her innermost emotions and details her struggles with mental health throughout the lockdown. At no point does this feel forced or exaggerated. Instead, it feels raw and honest. Charli has been working non-stop since 2008 and is quite clearly a workaholic, throwing herself into creating and performing music.

Even in lockdown, Charli can’t seem to slow down and instead makes the crazy decision to record an album at home within five weeks. It seems like a tremendous task, especially when you consider the fact that it usually takes a year to make an album. However, it is a brilliant way for Charli and her fans to come together, and there’s an absolute delight when she announces her plans via a Zoom meeting with the Angels. There’s something ever so touching hearing the stories of how Charli’s fans have connected from across the globe because of their shared love and appreciation for her work.

While the documentary mainly focuses on Charli as its subject matter, some focus is still shined upon the Angels. We are introduced to a wide range of different fans who all have their own unique identities and stories. There’s Cole in Alabama, Ronald in Mexico, Archi in London, and Emiliano (who performs as a drag queen called Poison Oakland) in California. All of them are facing their own afflictions regarding the pandemic. Emiliano has had several events canceled and confesses in one heartbreaking moment that they “feel like part of me has been canceled.” Despite a wide array of people participating in this documentary, it feels like the fans are pushed to the sidelines at times. And, some of their struggles seem slightly more pressing and important than Charli’s, but the directors seem more focused on Charli.

However, there is not enough time to focus on Charli at times, and we certainly lack insight into her past and her family life. She reveals certain nuggets of information, such as her father being adopted, and confesses that her therapist believes that she’s inherited his sense of “unwantedness.” In one scene, Charli’s mother calls in response to an Instagram post where Charli states that she “feels like a terrible person,” and it’s a poignant moment as her mother attempts to comfort and reassure her while being hundreds of miles away in the U.K. But the lack of historical background at the start of the documentary means that unless the viewer conducts their own research or happens to be a pre-existing fan, one isn’t truly aware of Charli’s upbringing and her family life. It seems that the focus is only on the present, which may frustrate some.

Overall, “Alone Together” will surely appeal to fans of Charli XCX’s work, and it may even entice new listeners to her music. Although heavy topics and subject matters are touched upon, the documentary never feels weighed down, and there is a lightheartedness to it. With its brief runtime of 67 minutes, the documentary is an easy and enjoyable watch but leaves the viewer eager for more substance.