“The Crown’s” Potential Effect On “Spencer” 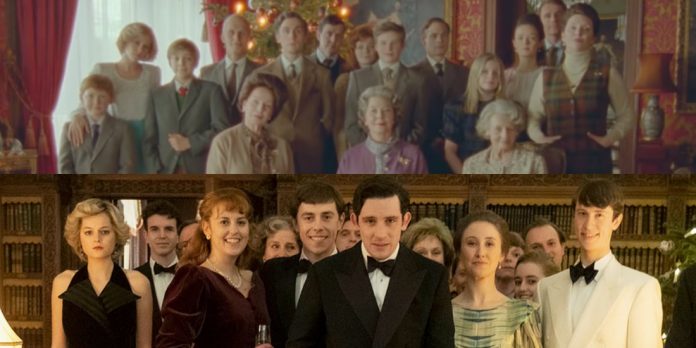 It has been twenty-four years since Diana, Princess of Wales, was killed in a tragic car crash. Her life and marriage to Prince Charles have long been a point of interest in the media. But with time, distance, and perspective, their marriage, divorce, and untimely death have become a topic of interest for those in the film and television industry. “The Crown” season four ends at Sandringham, where the Royal Family celebrates Christmas—which is also where the film “Spencer” takes place. The last thing the highly anticipated film will want is to appear as the epilogue to the successful fourth season of “The Crown.” Could fatigue over Diana and the royal family set in and affect “Spencer’s” Oscar chances?

“The Crown” won a whopping eleven Emmys, including Outstanding Drama Series, along with the top seven awards. Season four was its most highly anticipated to date because of the inclusion of the Princess of Wales. Instead of going with a well-known star, they plucked Emma Corrin from obscurity, who disappeared seamlessly into the role. For her efforts, Corrin earned an Emmy nomination, won a Golden Globe, Critics Choice, and won a SAG Award as part of the Ensemble, along with receiving an individual nomination. These are just some of the same groups who will be casting judgment on Kristen Stewart’s performance as Diana in the next few weeks. How will her performance hold up by comparison? Will director Pablo Larrain, screenwriter Steven Knight and Kristen Stewart’s interpretation of Diana and the events surrounding her that Christmas weekend (real or fictional) be too divisive for voters or will they appreciate the unique approach?

“Spencer” doesn’t just have its sights set on Best Actress– there are other Oscars the film will try to vie for. First up is its director, Pablo Larraín, who’s most well-known for his last film, “Jackie,” which dealt with another famous historical female figure, Jackie Kennedy. Larraín will enter the stacked Best Director race and will likely avoid any comparisons to Jessica Hobbs’s direction of “The Crown” series finale of “War.” However, “Spencer’s” screenwriter, Steven Knight, will likely be a different story. Knight, a previous Oscar nominee for “Dirty Pretty Things” (2002), will have to deal with comparisons to Peter Morgan and his interpretation of the Royal Family. Morgan has not only written every episode (forty to date) of “The Crown” and recently won an Emmy for writing “War,” but he is an expert in writing compelling dramas about the Windsor’s. Morgan is a past Oscar nominee for “The Queen” (2006), a drama detailing the aftermath of the death of Princess Diana and the effect on Queen Elizabeth II; he’s also received a Tony Nomination for his play “The Audience” (2015) detailing the relationship between the Queen and her Prime Ministers. This could get tricky for Knight as Academy members may prefer Morgan’s more sophisticated take on the royal family rather than Knight’s subversive fable, which plays loose with the facts to present something more challenging and unique.

Like “Jackie,” “Spencer” is an early favorite to land a nomination for Best Costume Design. Diana was considered a fashion icon, and both film and fashion critics will have their eyes on Jacqueline Durran’s interpretation of the Princess of Wales. Throughout “Spencer,” we see Kristen Stewart in numerous costumes as Diana must undergo a series of wardrobe changes within a single day– we even get a glimpse of her iconic wedding dress during a montage sequence. But will it be as impressive as “The Crown,” which created an exact replica of some of Diana’s most famous looks, including her infamous wedding gown? A win for Durran would be her third in this category after previously winning for “Anna Karenina” (2012) and “Little Women” (2019). Ironically “The Crown” lost the Emmy for Outstanding Period Costumes after previously winning for its first three seasons. Ultimately what hurt “The Crown” and could hurt “Spencer” is that both the show and the film might be set too recently in the past to receive anything more than a nomination against flashier, more imaginative work in movies such as “Cruella,” “Dune” or “House Of Gucci.”

It is worth noting that comparisons to “The Crown” did not hurt another Oscar hopeful. For season one, John Lithgow won an Emmy for Outstanding Supporting Actor for his portrayal of one of Britain’s best-beloved Prime Ministers, Winston Churchill. This did not trip up Gary Oldman on his way to Oscar glory for his leading role as Winston Churchill in “Darkest Hour” (2017). In this distinction, it is important to note that Lithgow played an older Churchill, while Oldman portrayed Churchill when he first came to power as Prime Minister during WWII. One other interesting occurrence with “The Crown” and Larraín’s film “Jackie” is that no television series (and there have been a lot) or film had ever won an Emmy or an Oscar for Best Costume Design for their portrayal of Jackie Kennedy’s iconic style. “Jackie,” unfortunately, would fall victim to this curse at the Oscars, losing the Oscar to “Fantastic Beasts And Where To Find Them.” However, later that year, “The Crown” broke the curse winning the Emmy for Outstanding Period Costumes with the episode “Dear Mrs. Kennedy” (2018). Maybe there is hope for “Spencer’s” leading actress and her dazzling outfits after all?

Also, what could help or hurt “Spencer’s” Oscar chances are the Windsor’s themselves. The film’s release just so happens to coincide with Queen Elizabeth II’s platinum jubilee (70 years on the throne). Add in Prince Harry’s upcoming memoir and her son Prince Andrew’s involvement with Jeffrey Epstein, and it could be too much House Of Windsor for the Academy to handle both in their entertainment and in their news consumption. The appetite for a film about the British Royal Family might be diluted by the time we get around to Oscar voting.

Also, how will “Spencer” perform at the BAFTAs? It’s hard to see the film being a favorite with the British Academy—an organization where Prince William or Diana’s oldest son is the acting President. Regardless, this will be an exciting race to follow as more reactions for “Spencer” pour in, and we see how critics groups respond to it over these next few weeks with the precursor awards before the Critics Choice, Golden Globes, SAG, and BAFTA all chime in with their nominations. Suppose the buzz is loud enough, despite voters’ validated love for “The Crown,” despite the overabundance of media exposure on the royal family, despite the film’s unique approach to telling Diana’s tragic story; despite it all….when it comes time for Oscar, “Spencer” might be too big to ignore.​

​Have you seen both “Spencer” and “The Crown?” Do you think that similarities between the two will help or hurt Pablo Larrain’s latest film in the Oscar race? Let us know your thoughts in the comments section below or on our Twitter account.