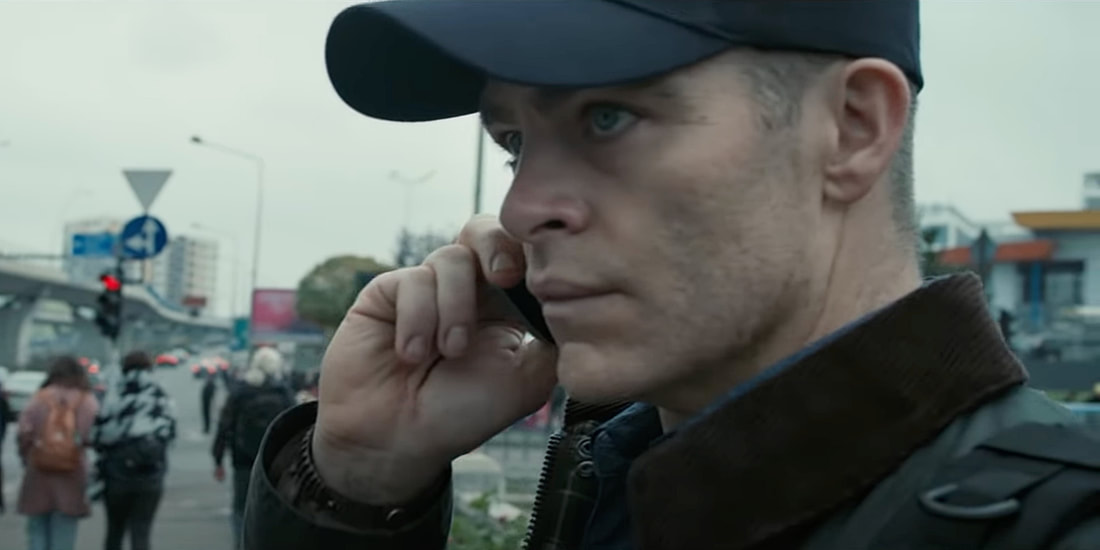 U.S Special Forces Sergeant James Harper (Chris Pine) loves his God, his country, and his family. Not necessarily in that order, but that’s how they are presented in “The Contractor:” James at church, James training for the army, James with his family. James is recovering from a potentially career-ending knee injury with the help of a pharmacy of painkillers. Despite his dedicated service, he gets discharged when they all show up in a drug test. His unit’s new commanding officer says the discharge is honorable, but James will still be losing his benefits, most importantly his pension and health insurance.

James is desperate because he and his wife (Gillian Jacobs) are already fending off debt collectors. Not desperate enough to call back the private security firms that call to offer him a job, but desperate. After someone close to him dies, he reconnects with Mike (Ben Foster), a former superior who is now a civilian and is able to provide for his wife and disabled son through work he does for a man named Rusty (Kiefer Sutherland), who runs an outfit based on a ranch and doing well enough to give James a $50,000 check signing bonus so that he doesn’t worry about his family while on a two-week assignment in Berlin. When the supposedly easy job goes awry, James is left to pick up the pieces and solve the puzzle of what’s going on so that he can return to his family.

This is one of Hollywood’s most well-worn plots, and screenwriter J.P. Davis does absolutely nothing with it. A series of flashbacks threaded throughout the film marks the one attempt to add some depth, showing how James’s father groomed him from an early age to be an army guy just like him, but it’s so hazily sketched out that it comes across as half-hearted. When James finally explodes about his father near the film’s end, Davis reaches a point about being there for one’s family by including even more backstory that we didn’t even see. The moment isn’t helped by Pine’s overcommitted delivery, but it’s what he had to do in order to sell the character beat as best he could.

That’s the biggest throughline of “The Contractor:” Overqualified actors doing their damndest to sell material that is so far beneath them that you wonder why and how they became attached to this project in the first place. By far the best reason to watch is the still-potent chemistry between Pine and Foster, reuniting for the first time since “Hell Or High Water.” The brotherly bond from that 2016 film easily slides into the love between brothers-in-arms here, and despite the sub-par dialogue, they make you believe that these are men who really would lay down their lives for each other if they had to. Sutherland knows he’s slumming it, tearing through his part like Jack Bauer on a bender. And then there’s poor Gillian Jacobs, forced to play an insulting stock wife role, only existing to worry about paying bills and chastising her husband for missing his son’s birthday while on the job.

All the work the actors put into elevating the script, though, ends up doing nothing. “The Contractor” is as bland as its title, with not even one exciting action sequence to its credit. A chase into the sewers feels for all the world like it wants to be an homage to Carol Reed’s classic “The Third Man,” but it can’t even stage itself properly. Alex Belcher’s industrial score does its best to get the film’s adrenaline pumping, but the one scene where it mostly succeeds (the extended sequence that makes up the bulk of James and Mike’s mission) is marred by some shoddy ADR work. Elsewhere it’s not a terrible film, technically speaking, but it is blandly competent in a way that makes it feel like it was designed to be played in the background while you’re doing other things, and that’s not what any movie should feel like. Being bad is one thing, but being boring is a death blow, and “The Contractor” is dead on arrival.