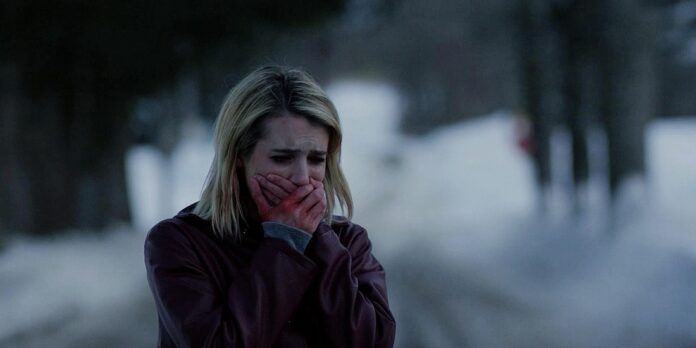 THE STORY – During the dead of winter, a troubled young woman (Emma Roberts) embarks on a mysterious journey to an isolated prep school where two stranded students (Kiernan Shipka, Lucy Boynton) face a sinister threat from an unseen evil force.

“The Blackcoat’s Daughter” wants to be the new horror film you show off to your cinephile friends as something atmospheric, moody and haunting. However, like another horror film from earlier this year, “The Belko Experiment,” it forgets to have a message underneath its penchant for violence and sheer terror. While writer/director Oz Perkins does an admirable job with how the film is presented in terms of its tone, visuals, and pacing, it’s the lack of a clear message that brings this demonic film down.

Katherine (Kiernan Shipka) is a 15 year old Catholic school student, who’s parents have not come to pick her up for her winter break during the month of February. She is not alone though, as another student named Rose (Lucy Boynton) is also staying behind at the school so she can reveal to her boyfriend that she may be pregnant. There is also a possibly unrelated girl named Joan (Emma Roberts) who is trying to make her way towards the school all by herself. She is aided by a kind man (James Remar) and his wife (Lauren Holly) as she makes her way to the upstate New York school. Meanwhile, back at the school, Rose starts to get curious about Kat’s mysterious behavior as she starts to suspect that there may be evil forces at play here.

“The Witch,” this is not. “The Blackcoat’s Daughter” certainly shares a few similarities with that film in terms of demonic possession and its focus on dark visuals and a moody atmosphere to keep the audience invested, the biggest issue here is the film’s overall meaning. Did Oz Perkins really just make this film to disturb us with its violent imagery that targets those who are religious? The whole idea of Satan taking over a young girl and the horrible acts he makes her do, not of her own free will, has been explored before in countless other horror films. “The Blackcoat’s Daughter” does not do anything to differentiate itself from those other films nor does it provide anything substantial towards its audience. The beginning part of the film is fine in that there is a foreboding nature to how Oz Perkins shoots the film and plays around with the telling of events. It creates for a mysterious first two acts with an overriding sense of unease that pulls us in, only to leave us scratching our heads at the end of the film wondering what was the point in everything we had just witnessed. Performances are all solid across the board despite the material lacking enough character development for the actors to really make their characters soar. Emma Roberts may be the most recognizable name of the cast but many will say its Kiernan Shipka who has the showiest role of anyone in the cast and it’s certainly true. However, I feel that Roberts is probably the standout regardless, mostly because of her final moments at the end of the film.

“The Blackcoat’s Daughter” is an idea that is stretched out to a merciful 93 minutes. Even with such a constrained runtime, there is still no reason that this violent horror film should have been made with such an empty and hollow heart. A demon, or perhaps Satan himself, posseses a young girl, bad stuff happens and we witness the aftermath with unnecesary twists thrown in. It’s a lackluster film that is crafted well in terms of its dark cinematography and features strong performances, despite the material lacking enough dramatic weight to really push this film into a higher tier in terms of overall quality.