The best picture Race Is Starting To Become More Clear 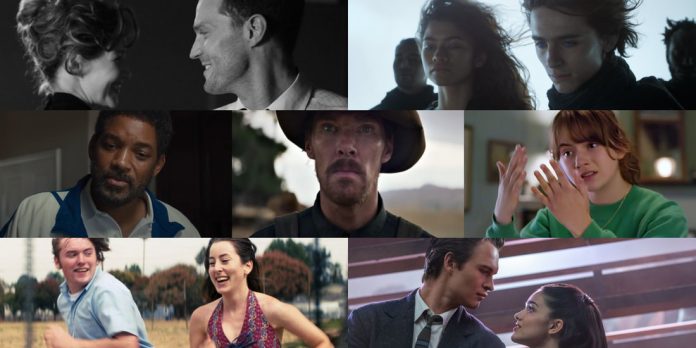 Regardless of how important the Golden Globes and Critics Choice Awards are this year, their nominees represent a reasonably clear consensus. In fact, they may have turned a traditional page in award season, as we now enter the stage where virtually every major nomination has already been locked up. There’s a case to be made that all eight above-the-line categories are mostly settled, with only a few spots out of 45 in these combined fields still open for the taking.

The Globes and Critics Choice may not have a lot in common, but they certainly had the same mindset when it came to Best Picture nominations. Going into their nomination morning, “Belfast,” “The Power of the Dog,” “West Side Story,” “Licorice Pizza,” “Dune,” and “King Richard” already looked like locks for Best Picture slots, and they all stayed right on track as expected with the Globes and Critics Choice. But both voting bodies also put “Don’t Look Up,” “CODA,” and “Tick, Tick…Boom!” in their Best Picture categories. This may not make them locks at the Oscars, but it certainly makes them the heavy favorites to round out the field. Considering that they are also the most nominated films from regional critics besides the six favorites, the consensus all around is pretty straightforward so far.

If these are nine of our 10 Best Picture nominees, despite ironically poor critic reviews for “Don’t Look Up” and the question of whether Netflix can get three nominations in one year, then only one spot is truly wide open with about a month-and-a-half until Oscar nomination morning. A Critics Choice nomination for “Nightmare Alley” and a Globes Best Comedy/Musical spot for “Cyrano” seem to make these two films frontrunners for that 10th spot, while multiple acting nominations for “Being the Ricardos” and “House of Gucci” are still keeping their faint hopes alive for now.

At the minimum, Best Picture has at least one spot still open, which might not be the case for some other major fields. Best Director already had an obvious consensus made up of Kenneth Branagh, Jane Campion, Steven Spielberg, Denis Villeneuve, and Paul Thomas Anderson, with only Anderson missing at the Globes in favor of Maggie Gyllenhaal. Yet the Critics Choice put Anderson in with Branagh, Campion, Spielberg, and Villeneuve while also including Guillermo del Toro, who now may be the most likely nominee if one of the top five misses at the Oscars. It is debatable if one spot is left for Best Director, yet there’s probably much less debate about Best Actor. Will Smith, Benedict Cumberbatch, Andrew Garfield, Denzel Washington, and Peter Dinklage all got into the Globes and Critics Choice, as they have with virtually every critics’ branch this season. In fact, Nicolas Cage is virtually the only other actor who’s joined them whenever a spare spot opens up, as it did with the Critics Choice. But in this field where only six actors have gotten the majority of nominations so far, Cage is all but certain to be the odd one out if it comes down to these six, like past critic award darlings Delroy Lindo and Ethan Hawke before him.

Best Actress is supposedly more wide open, but it seems an obvious if not lazy consensus has settled in there too. Kristen Stewart has been the only contender locked in for a while. Yet, Nicole Kidman, Lady Gaga, Jessica Chastain, and Olivia Colman continued to be the next most secure picks with Globes and Critics Choice nominations. With the likes of Jennifer Hudson, Penelope Cruz, and Frances McDormand all shut out, the only ones who might still have hope to break up this group of five at the Oscars are Alana Haim and Rachel Zegler. Yet even though Haim and Zegler might be the only contenders in this entire field with films that can get Best Picture nominations, that may not be enough to put them over the top.

Best Supporting Actor is an even more startling case of a field that looked so wide open mere weeks ago yet looks all but settled now. Thanks to the Globes, Critics Choice, and the first batch of regional critics awards, the top five clearly seem to be Kodi Smit-McPhee, Ciaran Hinds, Jamie Dornan, Jared Leto, and Troy Kotsur. There was brief suspense when the Globes somehow managed to snub Leto out in favor of Ben Affleck, yet the Critics Choice didn’t take the out and put Leto in any way, while J.K. Simmons got its extra sixth slot. Despite the likes of Mike Faist, Jon Bernthal, Bradley Cooper, and Robin de Jesus having potential Best Picture nominees in their corner, they are likely in the same boat as Affleck and Simmons in still being on the outside looking in. Unless “Belfast” slips from frontrunner status enough to make one of its two supporting actors vulnerable, or Kotsur and Smit-McPhee turn out to be mere critics darlings, or Academy voters turn out to have their limits with Leto, it looks like Supporting Actor finally has a settled field of five leaders, if not locked in nominees.

Best Supporting Actress is top-heavy with contenders, yet that seems to leave just one free spot. The other four slots appear to be reserved for Caitriona Balfe, Aunjanue Ellis, Ariana DeBose, and Kirsten Dunst, as the Globes and Critics Choice united in agreeing. But Ruth Negga, Ann Dowd, and Rita Moreno combined to take the only other spots left, leaving them poised to lead a three-way race for the last nomination unless past winners Cate Blanchett, Marlee Matlin, and Meryl Streep rally back.

As for the Screenplay categories, at least one of them may have its five nominees settled. Original Screenplay has had spots reserved for “Belfast,” “Licorice Pizza,” and “King Richard” for some time, though mixed reviews for “Don’t Look Up” and “Being the Ricardos” put their own reservations in brief doubt. But thanks to the Globes and Critics Choice rallying around Adam McKay and Aaron Sorkin like usual, it looks like it will take a miracle – which would apparently work better than any rotten Tomatometer– for either of them to miss now. As such, the only chance for any other Original screenplay to make it might be if “King Richard” misses as it did at the Globes. Adapted Screenplay looks more open, with “The Power of the Dog” and “West Side Story” as perhaps the only two sure locks. “The Lost Daughter” may be a near-lock, while “CODA” and “Dune” helped boost their case for the last two spots with Critics Choice nominations. Nonetheless, the likes of “Tick, Tick…Boom!” “Cyrano” and “Drive My Car” are there to step in if they falter. Refreshingly, this may be the only above-the-line field where more than one nomination is open for the taking. Of course, that might be astonishingly premature to say in mid-December, but the conclusion is undeniable at this particular point and time. As it stands right now, every single significant field either looks mostly full or completely full, and the time to change that will run shorter and shorter before anyone knows it.

Even if the Globes and Critics Choice are not as important as people think – especially the Globes this year – it’s going to be a while before anything else shakes up all these stagnant fields. The next few weeks of regional critics’ nominations will likely largely echo the same Best Picture, Director, Actor, Actress, Supporting Actor, Supporting Actress, and Screenplay fields we’ve seen the last several weeks, with only a few exceptions here and there. Then once the Globes and Critics Choice pick their winners on January 9th, the next opportunity to really shake these races up won’t come until SAG nominations on January 12th, followed by the big marathon of PGA, WGA, and DGA nominations all on January 27th. All of that action is still a month away, and by then, the general consensus of nominees might be too entrenched to be truly altered. It’s only taken a month for nine movies, five directors, six actors, seven or eight lead actresses, five supporting actors, and seven or eight supporting actresses to take up the vast majority of nominations and wins this season. With another month to strengthen their lead, it might be hard to imagine any surprise nominees barging in with them, at least until the guilds offer or shut down any last-ditch hope. Every year, awards season offers endless possibilities for potential nominees and contenders. Yet every year without fail, those possibilities get squeezed down into a bland consensus at some point. It just so happens that this year, the boring consensus in the above-the-line categories has formed quicker than usual. The Golden Globes and Critics Choice awards can and will take their fair share of the blame for that in the days ahead. But their nominations only reflected what everyone else has been thinking so far and what everyone else is likely to keep thinking for another month or so.

What do you think will be nominated for Best Picture this year? Check out the NBP team’s current Oscar predictions here and let us know your thoughts in the comments section below or on our Twitter account.