The Best Horror Films To Watch With Friends 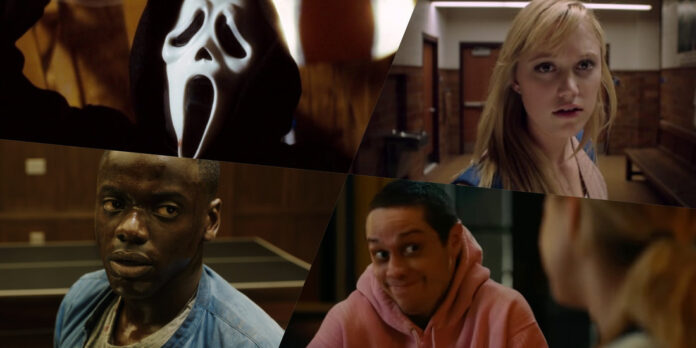 How well can you trust the company you keep? That is the question posed by Halina Reijn’s horror-comedy, “Bodies Bodies Bodies,” a satirical blend of murder mystery and fragile Gen Z friendships. Written by playwright Sarah DeLappe, and based on a story by author Kristen Roupenian, the A24-produced slasher has an endgame with a twist. The film takes place at a remote family mansion in upstate New York, where a group of rich twenty-something friends gathers for a hurricane party. When an ice-breaker party game leads to actual murder, the friends must identify the killer among a group where everyone is a suspect. The film builds on the “party gone wrong” trope used frequently in the horror genre to disrupt safe spaces where characters are meant to enjoy one another’s company. From the blood-soaked prom in “Carrie” (1976) to the unsettling party sequence in “The Shining” (1980), there are some gatherings where you don’t want to be a guest. But sometimes horror films are best enjoyed with the company you keep. From body horror to slashers, part of the fun in exploring this genre is sharing the experience with a friend group, sparkling in suspense of what all the reactions will be. In anticipation of the upcoming release of “Bodies Bodies Bodies,” here are five standout horror films for your next watch party.

If you want a truly eerie watch party experience, David Robert Mitchell’s “It Follows” will not disappoint. The film follows a young woman (played by Maika Monroe) pursued by a supernatural entity after a sexual encounter. “It” is an unknown force that can embody the form of anyone, even the people you know and love. A bone-chilling premise is made even scarier by not knowing whose form is possessed at any given time. The film plays in the confines of isolation and the inability to trust your surroundings. Mitchell’s “less is more” approach, which has worked wonders in horror over the years, is used perfectly. Rather than overtly explaining “It,” dread is felt from the paranoia-filled atmosphere; the film’s protagonist constantly looking over her shoulder is enough to induce anxiety. “It Follows” sends you down a rabbit hole of different interpretations and split reactions.

Before I saw “Psycho” in its entirety, I had seen and heard the shower scene. From the iconic silhouette behind the curtain to Bernard Herrmann’s thrilling score capturing the tension, this scene became imprinted in the pop culture zeitgeist. Decades later, the lingering memory of Alfred Hitchcock’s film is that of a timeless horror classic. Based on the 1959 novel by Robert Bloch, the story follows Marion Crane (played by Janet Leigh) on the run with a bag full of cash. She checks into the notorious Bates Motel, where manager Norman Bates cares for his mother. Hitchcock masters the art of suspense. The moment you hit play on the film, the hypnotic opening sequence grabs your attention. As essential viewing for horror lovers and a perfect start for newcomers to the genre, “Psycho” holds up.

Through a creative magnifying glass and social commentary, Jordan Peele crafts a phenomenal directorial debut with one of the best films of the past decade. “Get Out,” led by a remarkable Daniel Kaluuya in what should have been an Oscar-winning performance, is a horror satire and emotional rollercoaster, with an intense final act. Kaluuya plays Chris, who goes upstate to visit his girlfriend Rose’s parents for a weekend that soon progresses into a disturbing nightmare. The film finds a middle ground between comedy and unsettling horror, playing on expectations in the process. Peele’s vision is unwavering with every twist and turn the story takes. His screenplay skillfully builds on tension and atmosphere with deliberate detail. The experience of watching “Get Out” with a group only adds to the intensity. This impeccably acted, genre-bending staple of modern horror will continue to be revisited for years to come.

A horror watch party would be incomplete without at least one stomach-churning entry to flinch at collectively. Remade from the 1958 science fiction film, David Cronenberg’s body horror masterpiece is as gross as it is tragic. Starring Jeff Goldblum and Geena Davis, the story follows scientist Seth Brundle (played by Goldblum), who, after one of his teleportation experiments goes wrong, begins to transform into a fly. The film packs so many layers into one: romance, grounded characters, gory special effects, a grotesque monster, and underlying themes of aging and disease that resonate to this day. As Brundle’s physical self slowly deteriorates, Cronenberg never loses sight of the humanity at the core of this story. The tremendous practical effects elicit a visceral reaction of disgust and yet still make you feel that a human being is inside this monstrosity. The gooey transformation scene alone earns “The Fly” a spot on this list – if only to look over at your friends while it unfolds.

“What’s your favorite scary movie?” Many films are worthy of such a title, but as far as “favorite to watch with a group of friends” goes, Wes Craven’s meta ’90s classic takes the cake. With entertaining self-awareness, homages to horror classics, and an iconic party sequence of its own, “Scream” will have your friends excitably on edge. Known for reviving the sub-genre of slashers, the film subverts and leans into horror film expectations with remarkable balance. The characters know the formulas, and Ghostface is an encyclopedia of the genre. The story epitomizes thrills and chills, with moments that are laughably satirical one minute and genuinely frightening the next. There is a universality to how Kevin Williamson’s screenplay uses multiple facets of fear, from jump scares to psychological trauma. Plus, Sidney Prescott and her friends are an iconic group. Their interwoven character dynamics are a vital part of what makes “Scream” a fun joint.

Do you agree with my list? What are you favorite horror films to watch with your friends? Have you seen “Bodies Bodies Bodies” yet? If so, what do you think of it? Please let us know your thoughts in the comments section below or on our Twitter account.

Share
Facebook
Twitter
Copy URL
Previous article
“All The Beauty And The Bloodshed” Chosen As The Centerpiece Film For NYFF60
Next article
The Next Best Picture Podcast – Interview With “I Love My Dad” Star, Patton Oswalt