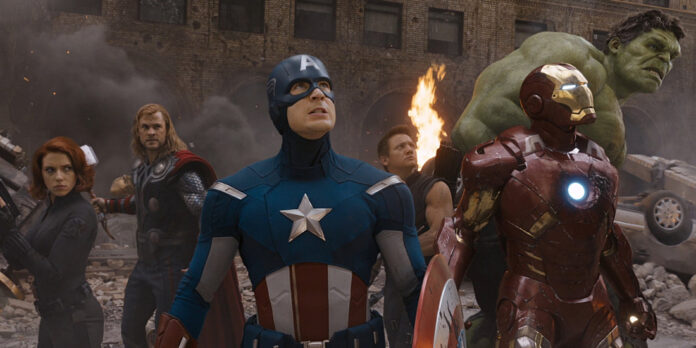 ​In 2012, Joss Whedon pulled off some sort of a miracle with the first Avengers film titled “The Avengers.” What had started four years prior with 2008’s “Iron Man” and had continued with “The Incredible Hulk” (Although, Mark Ruffalo would later go on to replace Edward Norton), “Thor” and “Captain America: The First Avenger,” culminated in seeing Marvel’s mightiest heroes team up to take on Thor’s primadonna brother Loki, in a battle for the fate of humanity. We now know that this was all set up for what would come later as well with Loki working under the command of Thanos who we will finally see in “Avengers: Infinity War,” but the thrill, excitement, and wonder of seeing all of these characters on screen for the first time was something special and has often been imitated but never duplicated.

Tony Stark aka. Iron Man (Robert Downey Jr.) is in the process of rebuilding Stark Tower in New York City with clean energy when he is approached by Agent Coulson (Clark Gregg) assemble the Avengers, a mighty fighting group of Earth’s mightiest warriors. The reason for this is because Thor’s brother Loki (Tom Hiddleston) has arrived to Earth and gained access to a cubed energy source known as the Tesseract which has the power to wipe out the Earth. He plans to wage war against the Earth with a loaned army known as the Chitauri and get back at his brother Thor (Chris Hemsworth). After being thawed from ice and awakened to see he is existing in a new era, Steve Rogers aka. Captain America (Chris Evans), is also brought in by Coulson and Nick Fury (Samuel L. Jackson) to lead the fight against Loki along with the help of brilliant scientist Bruce Banner (Mark Ruffalo) who is brought on to track down the Tesseract despite the threat he poses to everyone around him if he gets angry and turns into the giant green monster known as the Hulk. Together, along with SHIELD agents Natasha Romanoff aka. Black Widow (Scarlett Johansson) and Clint Barton aka. Hawkeye (Jeremy Renner), the group known as the Avengers, must learn to put aside their differences and stand together to take out Earth’s greatest threat yet.

“The Avengers” is a war film, through and through. Nick Fury says as much in the opening of the film when he declares to Agent Coulson “We are at war.” There is a lot of talk about soldiers, freedom, control, war and the old-fashioned idea of heroes in “The Avengers” and that is where the film gets its strength from. Whedon’s film is not afraid to exist as a pure superhero film. There are good guys, teaming up against a bad guy and the Earth’s fate lies in the balance. Pretty straightforward. Whedon wisely focuses on the characters, their interactions with one another and flawlessly continues their arcs from the previous films (Something that producer Kevin Feige has become a master at orchestrating across many different projects within the MCU). The film has a lot to cram into its nearly two and a half hour running time and it manages to flow pretty well throughout and never feels rushed. One sacrifice that had to be made in order to accomplish this is the reduction of the film’s newest character Hawkeye. We all know Jeremy Renner is a brilliant actor (“The Hurt Locker” & “The Town”) but he is practically wasted in Whedon’s film (Something he would go on to correct in the Avengers sequel “Age Of Ultron”) as he gets brainwashed by Loki’s spear and acts as his mindless henchman until the film’s third act. That is one of a few minor quibbles I personally have with Joss Whedon’s epic-sized film but they are nothing compared to how much Whedon got right.

Marvel’s films live and die by the talent, charm, and believability of their cast. Each one of these characters in “The Avengers” has already proven that they are more than capable of leading their own standalone film and when you throw them all together, there’s certainly going to be a clash of egos. Take Tony Stark and Steve Rogers for example (A feud which would later culminate in “Captain America: Civil War”). Rogers is all about bringing the team together to stop Loki under the guidance of SHIELD, while Stark always believes he knows better than the others and is always going rogue to get things done his well. As he says in the movie to Agent Coulson he’s volatile, self-obsessed and does not play well with others. Both Thor and Steve Rogers continue their “fish out of water” stories on Earth quite well and Bruce Banner becomes a major focal point in the film’s second act, as Whedon wisely works towards the reveal of the genius scientist’s transformation into the destructive force known as the Hulk which poses a threat to everyone on the team. Thor’s relationship with his brother Loki is also expanded upon in an organic way since the first “Thor” film as their Shakespearean tragedy humorously gets pointed out by Tony Stark as being “Shakespeare in the park.” It is here that Loki established himself in the hearts of many fans as one of the best villains in the almost now 20 Marvel films in the MCU. Whedon and Hiddleston discovered an insecure, diva quality to Loki who so desperately wants to be a rock star, separated from his brother’s long shadow that it not only provided a ton of pathos to the character but also gave characters such as Tony Stark (“There’s no scenario where you win.”), Agent Coulson (“You’re going to lose. It’s in your nature.”) and even unnamed characters (“There are always men like you.”), plenty to work with in terns of pushing the character and the film’s themes forward. Loki shares my favorite dialogue scene of the film with Natasha Romanoff at one point, who also gets a much larger role this time around after making her initial appearance in “Iron Man 2.” As the other human of the group with no actual superpowers to speak of, she still manages to pull her own weight, kicks some serious ass and propels the film’s plot forward.

Quite possibly the funniest Marvel film to date (Literally every single line out of Tony Stark’s mouth is pure gold) and definitely some of the most fun, Whedon was unable to capture the overall highs of this film again with his sequel “Age Of Ultron,” thus leaving “The Avengers” as something that is still special to any and all Marvel fans. We are very much like Agent Coulson in this film, as he looks on at all that is happening with the coming together of these remarkable people with awe and sentiment. A chaotic, huge and exciting action sequence in the third act with minor but endlessly entertaining squabbles amongst the team as they try to initially work out their differences in the early goings, keeps “The Avengers” thrillingly entertaining throughout. Never missing a beat in terms of its story, characters or sense of pacing, Whedon’s initial superhero team-up movie still holds up remarkably well till this day and remains the gold standard by which other shared universe films need to live up to.​