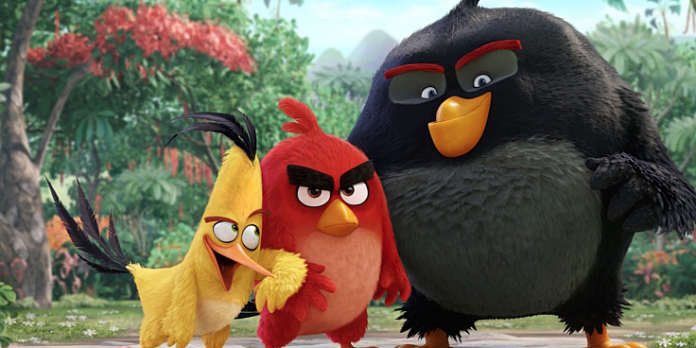 THE STORY – Flightless birds lead a mostly happy existence, except for Red (Jason Sudeikis), who just can’t get past the daily annoyances of life. His temperament leads him to anger management class, where he meets fellow misfits Chuck (Josh Gad) and Bomb. Red becomes even more agitated when his feathered brethren welcome green pigs to their island paradise. As the swine begin to get under his skin, Red joins forces with Chuck and Bomb to investigate the real reason behind their mysterious arrival.
​
THE CAST – Jason Sudeikis, Josh Gad, Danny McBride, Maya Rudolph, Kate McKinnon, Sean Penn, Tony Hale, Keegan-Michael Key, Bill Hader & Peter Dinklage

The Angry Birds App is one of the most addicting and enjoyable mobile games I have ever had the pleasure of experiencing. However, the film adaptation does not provide nearly as much enjoyment as its mobile counterpart. While the film does stay true to the game’s concept, tone, and visuals, the film feels incomplete. When you try to construct a feature length film from a game which doesn’t really have much of a story to begin with, you tend to get unfulfilling results. It certainly doesn’t help that “The Angry Birds Movie” is loaded with themes that will confuse children and their respective parents on the usages of anger to get what we want.

​On an island populated by birds that cannot fly, Red (Jason Sudeikis) is not exactly like the other birds. While every other bird is happy and joyful, Red is constantly annoyed by almost anything and everything around him. He is an angry bird. His issues eventually land him in an anger management class where he meets a super fast bird named Chuck (Josh Gad) and a bomb bird named Bomb (Danny McBride). The straw that breaks the camel’s back for Red happens when a bunch of seemingly nice green pigs, led by Leonard/King Mudbeard (Bill Hader), makes their way towards the island acting all friendly towards the birds. However, Red knows that the green pig’s motivations are not true and sets off with his two new friends to uncover the true meaning behind their arrival.

“The Angry Birds Movie” is certainly better than it has any right to be. Even though it is not a flat out disaster, this film still lacks any of the thematic depth offered within say a Pixar film or even high tier Dreamworks Animation films. The fact that the film felt it was a good idea to teach kids that channeling their anger as a means to achieve a goal would be a good message is baffling. It’s a lesson one learns as you get older, not one which you should be learning at a young age. Which leads me to the humor of this film. It’s a cross between “Shrek” meets “Family Guy” in its brief gags and colorful innuendos. However, one again, the film seems confused as to who its target audience is and seemingly wants to appeal to both kids and adults. The balance, however, is not there.

So what does “The Angry Birds Movie” get right? The voice acting is fun. Jason Sudeikis and Josh Gad, in particular, are both very effective in their roles here. However, other voice actors such as Sean Penn are underutilized here. And the animation style by Sony Pictures Imageworks maintains the tone of the original game and presents a unique and colorful pallet that is smooth and inviting. And the film’s final third act is both exhilarating and action packed. It’s definitely the highlight of the movie. But having to get through the first 2/3rds may try many people’s patience.

So is “The Angry Birds Movie” worth your time? I’d have to honestly say no. Even though it exceeded my expectations, I cannot fully say who this film is exactly for. Clearly, it’s made for children but some questionable themes and adult gags should make parents hesitant towards bringing their kids to see this film. And I cannot imagine adult audiences going on their own to see this film without their kids, so where does that leave us? “The Angry Birds Movie” wanted to be too many different things to too many different people. Although it didn’t exactly make me angry, I am frustrated.