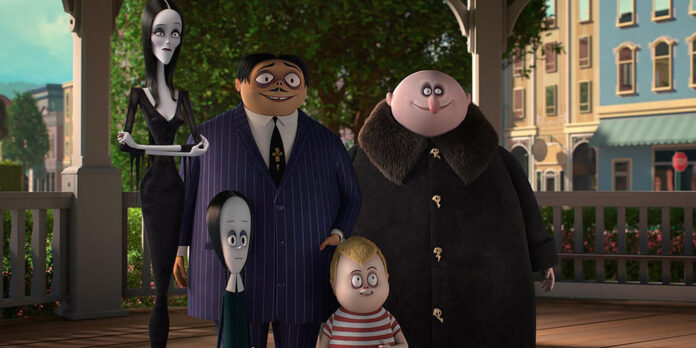 THE STORY – Hoping to get closer as a family, Gomez, Morticia and the rest of the Addams clan embark on an adventurous road trip in a hideous and humongous camper.
​
THE CAST – Oscar Isaac, Charlize Theron, Chloë Grace Moretz, Nick Kroll, Javon Walton, Snoop Dogg, Bette Midler & Bill Hader​

​​​​​​​When the first animated “Addams Family” was released in the fall of 2019, it came with an all-star cast (Charlize Theron as Morticia, Oscar Isaac as Gomez, Chloë Grace Moretz as Wednesday, etc.) that had many fans wondering why this wasn’t a live-action reboot of the property instead, given how perfect these actors seemed for their parts. Additionally, some questioned the need for a reboot at all since the Barry Sonnenfeld-directed originals of the 90s starring Anjelica Huston and Raul Julia still hold up to this day. Despite its mixed reviews, “The Addams Family” became a massive commercial success upon its release two years ago, and, unsurprisingly, a sequel was promptly put into production and fast-tracked for Halloween 2021. While it may seem like no one outside of the younger audience would be anticipating the follow-up, with a new setting and a fresh direction for the franchise, could “The Addams Family 2” be what the series needs to stay relevant and maybe even earn back some old fans in the process?

Following the events of the first film, “The Addams Family 2,” finds Morticia (Theron) and Gomez (Isaac) conflicted over the fact that their children Wednesday (Moretz) and Pugsley (Javon Walton, taking over for Finn Wolfhard) are growing up so fast and leaving less time for their family. Whether they’re skipping dinners or too occupied with “scream time,” they’re simply separating from their fellow Addamses and finding their own place in the world. To try and bring back this bond, Morticia and Gomez come up with a plan to cram their family – including Uncle Fester (Nick Kroll) and butler Lurch (Conrad Vernon) – in a haunted camper and take a cross-country trip across the United States. However, this odyssey isn’t without a few obstacles, as, soon enough, suspicious famed scientist Cyrus Strange (Bill Hader) sets his sights on Wednesday as a result of her incredible intellect. With a few important secrets to share, he just may split up the Addams family for good.

Without a doubt, “The Addams Family 2” absolutely delivers when it comes to capturing the compelling character dynamics in this fearsome family that has captivated viewers for decades. The voice cast is primarily in top form (especially Isaac, who delights as he’s allowed to deviate from his more “serious” fare of late) even if a select few are underutilized (Theron tragically has less of a lively presence this time around). You can always count on these relationships to be reliably riotous in some regard. Not every joke lands – such as cringe-worthy comments about today’s culture with references to Billie Eilish and “social distancing” – but the Addamses are at their best when they’re they’re able to play off one another’s pernicious personalities and explore the contrast between their characters. The few fun visual gags that are featured (often revolving around Wednesday’sWednesday’s sinister schemes) are also quite amusing, showing how the family is most successful with macabre slapstick humor that demonstrates how they differ from more “normal” parents and children. However, in spite of these select moments of mirth, “The Addams Family 2” sadly can’t overcome the fact that its story is a rather scattered mess.

For the first half of the film, we largely just follow the family on a series of pit stops on their road trip, with little adding any significance to the story at hand – or even being all that funny, for the most part. For every scene that stands out (a silly sequence where a bitter Wednesday has to participate in a beauty pageant, described with delicious drollness by Moretz), another falls flat on its face (a brawl at a biker bar morphing into a musical number set to Gloria Gaynor’sGaynor’s “I Will Survive” that feels extraneous). This whole time, the Addamses are pursued by a loony lawyer (Wallace Shawn) who attempts to kidnap Wednesday for the cryptic Cyrus Strange. Still, his place in the narrative is poorly explained. When we discover Strange’s “master plan” near the end of the movie, the story abandons its “scary” roots for atypical sci-fi-esque twists and turns (complete with a climax centered around a kaiju skirmish of sorts), seemingly forgetting what makes this franchise beloved to fans in the first place. For a film released almost solely to capitalize on the “Halloween spirit” that materializes throughout the month of October, there there’s little here to scratch that itch for young horror hounds in the making.

Children will no doubt be entertained by the chaotic spectacle on display throughout “The Addams Family 2” – especially in the absurdist third act – but those are likely the only audience members who will walk away thinking fondly on this follow-up. While it still features the characters we all know and love, its scrambled story simply keeps it from challenging the other “Addams Family” adaptations we’ve seen so far in terms of sheer entertainment value. Coupled with the still cheap-looking animation, and “The Addams Family 2” feels more like a commercial product churned out with minimal effort instead of a truly satisfying sequel to its passable but still promising predecessor.