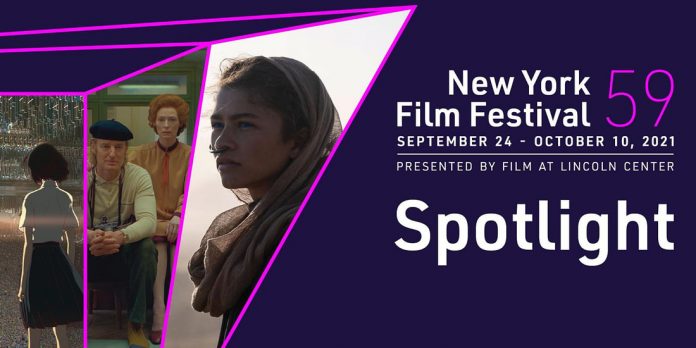 Click below to see the full lineup in the Spotlight Section.

“Our Spotlight section is a new part of our reshaped New York Film Festival, a place that this year encompasses a range of cinema, new and old,”said Eugene Hernandez, Director of the New York Film Festival. “Of the new work, we’re showcasing a selection of anticipated films (and talent) from recent festivals (Wes & company! Olivia! Timmy! Jane & Charlotte! Joaquin! and more), while also looking back at our roots, celebrating the history of NYFF and New York City’s film culture by shining a special light on Amos Vogel. We hope that our Spotlight section, in year two, will again engage, enlighten, and entertain!”

The NYFF59 Spotlight retrospective will be followed by tributes at repertory cinemas across New York City—Anthology Film Archives, Film Forum, Light Industry, Metrograph, MoMA, and the Museum of the Moving Image—in an unprecedented collaboration. The Spotlight section is programmed by Eugene Hernandez and Dennis Lim. NYFF’s Amos Vogel centenary celebration is organized by Thomas Beard, Dennis Lim, and Tyler Wilson.

NYFF59 will feature in-person screenings, as well as select outdoor and virtual events. In response to distributor and filmmaker partners and in light of festivals returning and theaters reopening across the country, NYFF will not offer virtual screenings for this year’s edition. Proof of vaccination will be required for all staff, audiences, and filmmakers at NYFF59 venues. Additionally, NYFF59 will adhere to a comprehensive series of health and safety policies in coordination with Lincoln Center for the Performing Arts and state and city medical experts, while adapting as necessary to the current health crisis.

Belle
Mamoru Hosoda, 2021, Japan, 121m
Japanese with English subtitles
In his densely beautiful, eye-popping animated spectacle, Academy Award–nominated director Mamoru Hosoda (Mirai) tells the exhilarating story of a shy teenager who becomes an online sensation as a princess of pop. Still grieving over a childhood tragedy, Suzu has a difficult time singing in public or talking to her crush at school, yet when she takes on the persona of her glittering, pink-haired avatar, Belle, in the parallel virtual universe known as the “U,” her insecurities magically disappear. As her star begins to rise, Belle/Suzu finds herself drawn to another “U” fan favorite—a scary but soulful monster whose “real” identity, like Belle’s, becomes a source of fascination for legions. Both a knowing riff on the Beauty and the Beastfairy tale and a moving commentary on the duality of contemporary living, Belle is a thrilling journey into the matrix and a deeply human coming-of-age story, packed with unforgettable images and dazzlingly styled characters. A GKIDS release.

C’mon C’mon
Mike Mills, 2021, USA, 108m
After gracing audiences with Beginners and 20th Century Women (NYFF54), writer-director Mike Mills returns with another warm, insightful, and gratifyingly askew portrait of American family life. A soulful Joaquin Phoenix plays Johnny, a kindhearted radio journalist deep into a project in which he interviews children across the U.S. about our world’s uncertain future. His sister, Viv (a marvelously intuitive Gaby Hoffmann), asks him to watch her 8-year-old son, Jesse (Woody Norman, in one of the most affecting breakout child performances in years), while she tends to the child’s father, who’s suffering from mental health issues. After agreeing, Johnny finds himself connecting with his nephew in ways he hadn’t expected, ultimately taking Jesse with him on a journey from Los Angeles to New York to New Orleans. Anchored by three remarkable actors, C’mon C’mon is a gentle yet impeccably crafted drama about coming to terms with personal trauma and historical legacies. An A24 release.

Dune
Denis Villeneuve, 2021, USA, 155m
A mythic and emotionally charged hero’s journey, Dune tells the story of Paul Atreides, a brilliant and gifted young man born into a great destiny beyond his understanding, who must travel to the most dangerous planet in the universe to ensure the future of his family and his people. As malevolent forces explode into conflict over the planet’s exclusive supply of the most precious resource in existence—a commodity capable of unlocking humanity’s greatest potential—only those who can conquer their fear will survive. Timothée Chalamet, Rebecca Ferguson, Oscar Isaac, Josh Brolin, Stellan Skarsgård, Dave Bautista, Stephen McKinley Henderson, Zendaya, Chang Chen, Charlotte Rampling, Jason Momoa, and Javier Bardem lead the all-star ensemble in visionary filmmaker Denis Villeneuve’s adaptation of Frank Herbert’s seminal novel. A Warner Bros. Pictures release.

​​The French Dispatch
Wes Anderson, 2021, USA, 107m
English and French with English subtitles
North American Premiere
Wes Anderson’s unmistakable cinematic style proves delightfully suited to periodical format in this missive from the eponymous expatriate journal, published on behalf of the Liberty, Kansas Evening Sun from the picturesque French town of Ennui-sur-Blasé. Brought to press by a corps of idiosyncratic correspondents, the issue includes reports on a criminal artist and his prison guard muse, student revolutionaries, and a memorable dinner with a police commissioner and his personal chef. As brimming with finely tuned texture as a juicy issue of a certain New York–based magazine to which the film pays homage, The French Dispatch features precision work from a full masthead of collaborators (including Bill Murray, Timothée Chalamet, Tilda Swinton, Benico del Toro, Frances McDormand, and Jeffrey Wright), each propagating inventive dedication to detail. Anderson’s deadpan whimsy is complemented by the film’s palpable sense of nostalgia. A Searchlight Pictures release.

Jane by Charlotte
Charlotte Gainsbourg, 2021, France, 86m
French with English subtitles
North American Premiere
In creating a documentary portrait of a parent, as actor Charlotte Gainsbourg does in her directorial debut, one could overly flatter the subject or iron out the tough creases. Gainsbourg avoids these traps in her wise and wondrous film about her legendary mother, the singer and actress Jane Birkin. Consisting of several intimate conversations between parent and child, as well as footage of Birkin performing onstage, the result is a spare, loving window into the emotional lives of two women as they talk about subject matter that ranges from the delightful to the difficult: aging, dying, insomnia, celebrity, and their differing memories of their shared past, which includes Charlotte’s father and Jane’s husband, Serge Gainsbourg. Jane by Charlotte is an unexpected, imaginatively visualized work that affords intimate access to someone whom many of us only think we know.

The Lost Daughter
Maggie Gyllenhaal, 2021, USA/Greece, 121m
In her striking feature directorial debut, Maggie Gyllenhaal adapts the 2006 novel of the same name by Elena Ferrante, a potent work of psychological interiority that follows Leda, a divorced professor on a solitary summer vacation who becomes intrigued and then oddly involved in the lives of another family she meets there. Oscar-winner Olivia Colman brilliantly embodies this quietly tempestuous character, finely shading in the enigmatic relationships she creates with strangers. A moving, sometimes unsettling inquiry into motherhood and personal freedom, Gyllenhaal’s adaptation maintains Ferrante’s signature ambiguity and matter-of-fact style, and features an outstanding supporting cast, including Jessie Buckley, Ed Harris, Dakota Johnson, Paul Mescal, Alba Rohrwacher, and Peter Sarsgaard. A Netflix release.

Marx Can Wait
Marco Bellocchio, 2021, Italy, 95m
Italian with English subtitles
North American Premiere
In his most achingly personal film to date, legendary Italian filmmaker Marco Bellocchio—an NYFF mainstay from the very beginning, from Fists in the Pocket (NYFF3) to The Traitor (NYFF57)—uses the occasion of a family reunion in his hometown of Piacenza to excavate and discuss a traumatic event: the death his twin brother Camillo, who committed suicide in the late ’60s at age 29. Through detailed conversations with his siblings, archival footage providing context about 20th-century Italian leftist politics, and occasional clips from his films, many of which were in some way imbued with this defining family tragedy, Bellocchio conducts a personal and historical exorcism. Reckoning with the push-pull the director has long felt between the twin poles of family and politics, Marx Can Wait is an attempt at reconciliation and understanding from a filmmaker in his eighties whose work has never shied away from the challenging or the provocative.

Red Rocket
Sean Baker, 2021, USA, 128m
Adding to his gallery of jet-fueled portraits of economic hardship within marginalized pockets of the U.S., director Sean Baker (The Florida Project, NYFF55) trains his restless camera on an unforgettable protagonist. Mikey, a wildly narcissistic former porn star fallen on hard times, has returned from L.A. to his depressed, postindustrial hometown of Texas City, reconnecting with his skeptical, drug-dependent estranged wife and mother-in-law, and using his wily charms to ingratiate himself into a community of people he couldn’t care less about. As played by a brilliantly cast Simon Rex (a star MTV VJ in the ’90s), Mikey is a charismatic force of nature—and destruction—who exploits the innocence and goodwill of everyone around him. Pointedly set against the backdrop of the 2016 presidential election, Red Rocket is an aptly steamed-up depiction of contemporary America as a playground for hustlers and con men. An A24 release.

The Souvenir
Joanna Hogg, 2019, UK/USA, 119m
The much-anticipated follow-up to her 2013 feature Exhibition finds Joanna Hogg mining her own autobiography to craft a portrait of the artist as a young woman in early 1980s London. Caught between her dreams of becoming a filmmaker and her commitment to a toxic romance, 24-year-old Julie (an excellent Honor Swinton Byrne) comes home each night from film school to the Knightsbridge apartment owned by her mother (Tilda Swinton) only to discover some new, unpleasant surprise proffered by her boyfriend, Anthony (Tom Burke), a dandyish junkie whose sophisticated aura masks an abyss of selfishness and desperation. An eminently refined and moving bildungsroman about the ties that inexplicably bind, The Souvenir—as its title suggests—is also an absorbing evocation of a time, place, and national mood. An A24 release.

​Which films are you most excited for at NYFF59? What do these premiere statuses tell us about what’s playing at Telluride? Let us know in the comments section below or on our Twitter account.