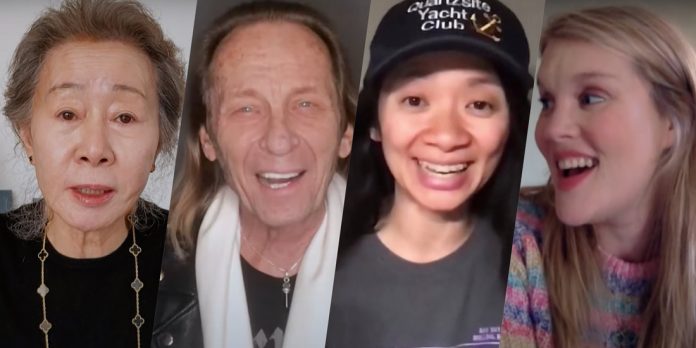 The 36th annual Film Independent Spirit Awards aired on April 22nd, 2021, at 10 pm EST on IFC, hosted by comedian and “Saturday Night Live” cast member Melissa Villaseñor. The Spirit Awards tend to be one of my favorite awards shows every year due to their unique group of winners and highlighting more smaller, lesser-seen films than the bigger televised awards show. It is also refreshing to see films and performances that have received many nominations throughout the season finally get a win and chance in the spotlight. This year, they also featured categories highlighting the best of the year in independent television, specifically new series. Some consider the Spirit Awards to be the “Film Twitter awards” as of late due to Film Independent’s reasonably easy process of anyone becoming a member and voting. Still, I was incredibly excited for this year’s ceremony, and the eventual crop of winners was a breath of fresh air in this elongated season.

No surprise, the most prominent award winner of the night was the Oscar frontrunner “Nomadland,” garnering four wins total for Best Feature, Best Director for Chloé Zhao, Best Cinematography, and Best Editing. While these were expected wins for the film, which mirrors the various awards it has won previously this season, even at the beginning of the awards race, it was fairly expected that “Nomadland” would triumph with the Spirit Awards. Though in a truncated segment, it was nice to see DP Joshua James Richards give a short speech for his win in Cinematography (likely a preview of what to expect Oscar Sunday). The film’s toughest win to call was in Editing. While it is the only Oscar nominee in the bunch, it wouldn’t have been shocking if the popular “The Invisible Man” pulled out a win here. Nevertheless, Chloé Zhao adds a few more awards to her mantel.

The other big winner of the night with three wins was “Sound of Metal,” taking home Best Male Lead for Riz Ahmed, Best Supporting Male for Paul Raci, and Best First Feature to Director Darius Marder. While the film racked up six Oscar nominations, outside of Sound and the occasional win for Editing, the film has not received that many wins from the televised awards. While not unexpected given their categories and competition, it was quite refreshing to get to hear speeches from Ahmed, Marder, and Raci (who gave maybe the best speech of the night in my book). Perhaps the most surprising win was Ahmed, beating out Oscar frontrunner Chadwick Boseman in “Ma Rainey’s Black Bottom;” however, there were quite a few predicting a surprise win for Riz, allowing for a spreading of the wealth and a chance to award this outstanding performance on a bigger scale than his previous critic’s group wins.

There were a few expected wins from some other Oscar frontrunners that have won previous awards this season. “Promising Young Woman” took home two awards for Best Screenplay for Writer-Director Emerald Fennell and Best Female Lead for Carey Mulligan. Fennell is likely the Oscar frontrunner for Best Original Screenplay, previously winning CCA, WGA, and BAFTA, so her win here was pretty expected. This year, Best Actress is all over the place with a different winner at every precursor, so who knows if Mulligan will be the victor on Sunday? But it was nice to see her rack up another win after previously winning the Critic’s Choice Award. This was also a stacked category of six nominees, so seeing her beat out such stiff competition could be telling (or the Film Twitter Mulligan hive paid their Film Independent dues). The other Oscar frontrunner adding another win to her roster was Yuh-jung Youn for “Minari” in Best Supporting Female. After winning SAG and BAFTA, Youn is likely the frontrunner for the Oscar and was certainly not a surprise here, but it is always lovely to see her give a delightful speech.

There were still some pleasant surprises amongst the winners for films that have received less love throughout this awards season. The summer comedy “Palm Springs” received Best First Screenplay for writer Andy Siara. While the film won Best Comedy at the Critic’s Choice Awards and received some nominations at places like the Golden Globes and WGA, the screenplay couldn’t crack the Best Original Screenplay lineup at the Oscars, so the win here was a welcome change and a great way to honor this beloved film. “Crip Camp” pulled an upset in the Best Documentary category. Though it is a pretty accessible Oscar nominee and heartwarming film, this is the film’s first big win at the televised awards shows. More were predicting the topical and heavy-hitting “Time” and “Collective” amongst the Oscar nominees present here. Some were even predicting the Oscar-snubbed “Dick Johnson Is Dead” as a way to honor that film after its Oscar shutout. While “Crip Camp” still has a chance to win on Sunday, it still has stiff competition with the precursor juggernaut and frontrunner “My Octopus Teacher.” The Best International Film award went to “Quo Vadis, Aida?” marking its first televised win in the category. With the predicted Oscar frontrunner “Another Round” not present here, this allowed the critically-acclaimed Bosnian film to get its chance to shine, showcasing its popularity and making it a potential spoiler for Oscar Sunday.

Another highlight of the Spirit Awards are the two awards after two independent film titans: Robert Altman and John Cassavetes. The Robert Altman Award is the Spirit Award’s equivalent to Best Ensemble, awarding the cast of a film along with its director and casting director. Previously announced, this year’s award went to “One Night in Miami…” and was given to director Regina King, casting director Kimberly Hardin, and the core-four ensemble Kingsley Ben-Adir, Eli Goree, Aldis Hodge, and Leslie Odom Jr, who received two Oscar nominations. While a heavy-hitter at the beginning of awards season, the film did not receive as many Oscar nominations as most expected or hoped for, so honoring the film here was a wonderful treat. It was great to see everyone give a little speech in a wonderful clip package highlighting the team and their experience making the film together. The John Cassavetes Award goes to a film with a budget of $500,000 or less, and this year the award surprisingly went to the film “Residue.” It was not the most widely-seen film in this category, but it was nevertheless a wonderful surprise to see this small film highlighted on a bigger platform, hopefully drawing more people’s attention to it.

For the first time, the Film Independent Spirit Awards presented awards to new series in independent television, highlighting smaller shows that the larger awards shows may otherwise forget. The critically-acclaimed “I May Destroy You” took home the top prize of Best New Scripted Series, as well as the juried prize for Best Ensemble. These are the show’s first televised wins following previous nominations at SAG and Critic’s Choice, hopefully making fans of the show very happy with these well-deserved wins. “Unorthodox” dominated the TV acting categories, winning Best Male Performance for Amit Rahav and Best Female Performance for Shira Haas. Haas received several nominations for her performance at all the major awards but has never won, so seeing her finally win after a long season of nominations felt like a great way to end her run. Finally, the winner for Best Non-Scripted or Documentary Series went to “Immigration Nation.” The entire category highlighted many under-the-radar shows that will likely get new viewers following this shout-out.

In this awards season, that has felt way too long, and like a regurgitation of the same films over and over again, the Independent Spirit Awards felt fresh and different in highlighting new winners as well as the nominees as a whole. While the winners can typically default to the Oscar nominees within a particular category, most of the cases this year were people and films not winning at the grander awards shows like “Sound of Metal,” “Crip Camp,” and “Quo Vadis, Aida?.” The expected wins made sense with this group rather than necessarily just defaulting to the Oscar frontrunners. The show was predictable to awards pundits but still unique from the more popular awards shows like Globes and SAG. It does suck that fantastic indies like “Never Rarely Sometimes Always,” “First Cow,” and “The Assistant” did not win anything, and there wasn’t a major spreading of the wealth amongst a wider variety of films. However, I am still grateful that these films and others were still nominated and showcased on a greater scale. It was also great to see them highlighting new indie TV, with several shows I hadn’t previously heard of receiving nominations. Overall, it was a fun and laid-back show with a great group of winners. It doesn’t have a massive impact on the Oscars compared to the other precursors, but it was still nice to see these winners recognized.

​What did you think of the Independent Spirit Awards last night? Did any winners surprise you? Do you think any will repeat this Sunday at the Oscars? Let us know in the comments section below or on our Twitter account.