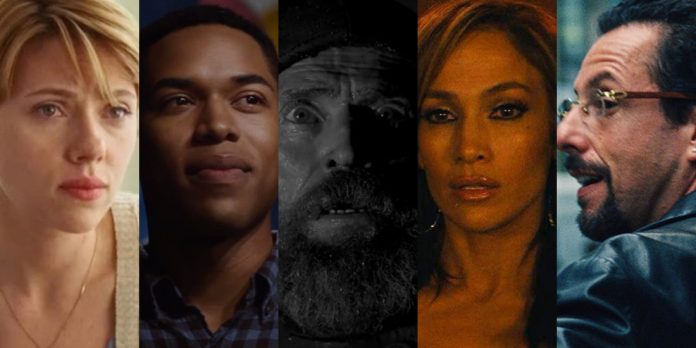 ​On November 21st, the Film Independent Spirit Awards announced their 2019 nominees, highlighting the best of independent film this year. Every year, the Spirit Awards put on a unique and fun show, particularly in their continued efforts to highlight much smaller, underseen films rather than instantly going for awards season frontrunners or mainstream titles. With such an incredibly strong slate of independent films, this year’s crop of nominees are no exception. However, no line-up is perfect and there are clear omissions and head-scratchers found in this group. Here, we’ll take a look at the surprise highs, lows, and WTF’s, as well as what this might mean for the awards season ahead.

A24 has had an impressive showing of nominations this year. Echoing the success of their previous film “Good Time,” the Safdie Brothers’ “Uncut Gems” garnered quite a number of nominations, including Feature, Director, Screenplay, Editing, and Male Lead for Adam Sandler. While “The Farewell” was predicted to have a lot of success, with locks for Director, Screenplay and Female Lead, its overall nomination count is underwhelming, but it did receive a nomination for the top prize. Director Lulu Wang is up for the Bonnie Award, a grant awarded to mid-career female filmmakers, so perhaps she was ineligible. Supporting Female and acting newcomer Zhao Shuzhen did receive a nomination, fortunately.

Despite missing out on a Best Feature nomination, “The Lighthouse” did incredibly well, receiving nominations for director Robert Eggers, both its actors (Robert Pattinson and Willem Dafoe) in lead and supporting, and the two major tech categories, Editing, and Cinematography. Sundance hit and critical darling, “The Last Black Man in San Francisco,” finally started to get some love this season with nominations in First Feature for director Joe Talbot, and for standout Supporting Male Jonathan Majors. While it has an impressive number of nominations for the Gotham Awards, “Midsommar” only managed to receive a Cinematography nomination despite all the love and praise for lead actress Florence Pugh. Many pundits (including many from this site) were hoping that the Spirit Awards would be the place to highlight and nominate “Waves” across the board, with many predicting Feature, Director, and possibly the ensemble receiving the Robert Altman Award (more on that later). However, the film only managed to earn one nomination in Supporting Female for Taylor Russell, which is absolutely deserved.

While Alfre Woodard received a Female Lead nomination, “Clemency” proved it was more than just their lead, receiving nominations for Feature and Screenplay. Potential frontrunner Renée Zellweger continued her hot streak with a Female Lead nomination for “Judy.” One of the biggest question marks of the day was Terrence Malick’s “A Hidden Life,” receiving a nomination for Best Feature and nothing else. What was especially puzzling was that the film’s most praised quality, its cinematography, was snubbed. But one of the biggest snubs was for surprise summer hit, “The Peanut Butter Falcon,” which had been expected by many to receive some notice for actor Zack Gottsagen and the film overall.

Interestingly, the Best Feature and Best Director categories only have one common nominee: the Safdie Brothers with “Uncut Gems.” “Honey Boy,” Shia LaBeouf’s autobiographical tale of his complicated childhood, performed very well with nominations for director Alma Har’el, Cinematography, and Supporting Male for both Noah Jupe and LaBeouf (though no nomination for LaBeouf in either Screenplay category, sadly). Interesting to note that, in Amazon Studios’ FYC for “Honey Boy,” Jupe is campaigned as Lead with LaBeouf, and not nominated (but still fantastic) Lucas Hedges in Supporting, so it’s peculiar that the Spirit Awards decided to nominate Jupe in Supporting. Surprise box-office hit “Hustlers” met the budget requirement and received some much-deserved love for director Lorene Scafaria, Cinematography, and Supporting Female for potential Oscar nominee Jennifer Lopez. Many were crossing their fingers that the critically acclaimed, but much underseen, “Luce” would make a showing with nominations; and boy did it ever, earning worthy nominations for director Julius Onah, Male Lead Kelvin Harrison Jr., and Supporting Female Octavia Spencer.

​Although many were hoping “Booksmart” would get a lot of love (particularly for its actors), the film only managed to receive a nomination for First Feature for director Olivia Wilde. The categories for First Feature, First Screenplay, and the John Cassavetes Award (for films with budgets of under $500,000) are noteworthy places to discover smaller, lesser-known films. Some that also received major nominations were “Give Me Liberty,” “Diane,” and “Burning Cane.”

The Best International Film nominees include the United Kingdom’s “The Souvenir,” and of course, “Parasite.” Two of France’s biggest films this year, “Les Misérables” and “Portrait of a Lady on Fire,” luckily made it in. A personal and exciting inclusion was the gorgeous Brazilian melodrama, “Invisible Life.”

As the nominations were being announced, the big question everyone was asking was, “Where’s ‘Marriage Story’?!” Well, the film was then announced as the winner of the Robert Altman Award for Best Ensemble, awarded to the director, casting directors, and major ensemble cast members. This win makes director Noah Baumbach and the actors (specifically Adam Driver, Scarlett Johansson, and Laura Dern) ineligible from receiving nominations for individual awards. The film is still nominated for Screenplay and Feature, however. The reaction to “Marriage Story” winning the Altman Award is mixed. On the one hand, it allows for recognition for the actors in the ensemble not necessarily getting the awards push, like Julie Hagerty and Merritt Weaver. It also frees up the acting categories for performances that might not end up receiving nominations in other places. However, with how cutthroat the acting categories are this year, it could potentially hinder those performers.

Now, as the first significant and televised awards body to release nominations, what does this mean for the season moving forward? Well, the Spirit Awards are not necessarily automatic predictors for the Oscars, specifically, the winners, as the Spirit Awards take place exactly one day before the Oscars. Additionally, these awards only highlight films below a certain budget and have a tendency to highlight smaller films rather than go for obvious bigger releases and potential Oscar nominees. They do, however, boost up smaller or more challenging films by nominating them here, giving them a platform and keeping them in the public eye longer. More nominations here help films like “Hustlers,” “The Farewell,” and “Honey Boy” to prove that they may be bigger contenders in the awards race than initially believed. However, since these nominations are announced earlier in the season, it can be a make-or-break moment for films losing momentum. Films like “Waves,” “Booksmart,” and “Midsommar,” that underperformed, can feel dead in the water with the exception of possible obvious places like critics groups. Overall, the Film Independent Spirit Awards highlight the best in independent film and this year is no exception, but more importantly, they allow a fresh and different group of nominees to shine that can feel revitalizing from the typical films that will be talked about repeatedly at every major awards show this season. They highlight underseen films and performances that might not have the major audience or campaign to get the chance at the bigger shows, and it’s nice that that has remained a constant.

What did you think of the nominations? What were the biggest surprises to you? Did anything stand out? Let us know in the comments section below or on our Twitter account.