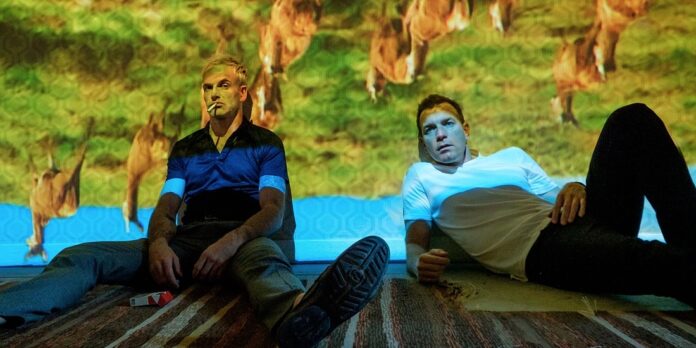 THE STORY – First there was an opportunity, then there was a betrayal. Twenty years later, Mark Renton (Ewan McGregor) returns to the only place that he can ever call home. There waiting for him are old buddies Spud (Ewen Bremner), Sick Boy (Jonny Lee Miller) and Begbie (Robert Carlyle). Sorrow, loss, joy, vengeance, hatred, love, fear, regret, self-destruction and mortal danger are also all lined up and ready to welcome him.

Now, this is how you do a sequel set twenty years after the events of the first film. I’m looking at you “Independence Day: Resurgence.” Danny Boyle’s original film, “Trainspotting” was a jolt of energy straight to the arm for moviegoing audiences and introduced us to the talents of Ewan McGregor, Ewen Bremmer, Jonny Lee Miller, Robert Carlyle and Kelly McDonald. The original cast is all back twenty years later with Boyle back in the director’s chair and John Hodge writing the screenplay again based this time loosely on the book “Porno” by Irvine Welsh. It’s a film that is not perfect by any means and is hindered a bit by comparisons to the original, which Boyle makes very apparent through the movie’s heavy use of nostalgia. However, for those who are fans of the first film, this late sequel will be a welcome return back to the world of sex, drugs, and dumb youth or nostalgic youth in this case.

Set twenty years after the events of the first film, Mark Renton (Ewan McGregor) makes his way back home to Edinburgh Scotland after he stole 16,000 pounds from his friends Simon “Sick Boy” (Jonny Lee Miller), Spud (Ewen Bremner) and Francis “Franco” Begbie (Robert Carlyle). He returns home to find Spud is suicidal after struggling to find purpose in life. Simon is running a run-down bar with a new girlfriend named Veronika Kovach (Anjela Nedyalkova), who may not be as in love with him as he is with her. And Franco has recently found a way to escape from prison and looking to get revenge on his former friend. Mark sets out to pay back his former friends and sets off on a new business venture, struggling to find success, purpose, friendship and ultimately making the decision to “choose life.”

Twenty years removed from the first film and one of the themes which Boyle and Hodge put through the film is the feeling of nostalgia. These characters look back on how they were as young and immature addicts and realize that even with all of this time between them, they are no different today than how they were back then. The madness and crazy situations return as we witness vomiting within a closed zip lock bag or a character getting their arm completely sliced open. Yes, it’s fair to say “T2: Trainspotting” has its moments of crime and insanity, without pushing the characters into complete criminal territory, with the exception of Begbie, who is just as demented as ever. We still care about these characters because at the end of the day, despite their poor decisions, they are simply trying to make it within this world and the only way they’re going to get there is together. It’s that feeling of camaraderie which gives the film some of its best moments such as when Simon and Mark sing an improvised piano number at a bar while trying to pull off a heist.

However, despite these memorable characters and the performances by the actors, all of whom are fantastic, the film’s biggest asset and problem is director Danny Boyle. Always one to deliver his own unique flare and style to a film’s production, Boyle pulls back no punches in giving “T2: Trainspotting” the same energy and vibe as the first film. Unfortunately, it all does not come together as well as the original did in terms of pacing as the editing feels more random than deliberate, resulting in a film that is chaotic and messy to a fault at times. The soundtrack is fantastic and pulses the film with tremendous energy but Boyle shows no restraint even though his characters are trying to do so within their own lives. Instead, one could argue his tendency to outdo the first film is “T2: Trainspotting’s” biggest flaw of all. It would all be forgiven if the story warranted it but the screenplay by John Hodge seems to be grasping at straws in order to bring us a story that feels as important as the first film did. Where the first film was mainly about whether these poor boys would survive, this film does not dip into those life and death stakes until the third act. Before then, we are simply spending a bunch of time watching Mark get reacquainted with his childhood friends and waiting for the real moment of this film when all four characters are in the same room. A forced triangle relationship between Renton, Simon, and Anjela also does not offer any real stakes as the relationships between the original characters does and one wonders if Veronika Kovach (As good as she is in this) was needed for this film at all.

Danny Boyle, John Hodge and the cast all approached “T2: Trainspotting” from a place of love and it shows. Even though we would have been fine without ever getting a sequel to the acclaimed 1996 original, I am happy to report that “T2: Trainspotting” pretty much sells itself based on the love and nostalgia for the first film. The filmmakers know this and as a result, it offers more of what we loved about the first film. However, a thinly plotted story and an overabundance of camera/editing gimmicks to overcompensate said lacking story keeps “T2: Trainspotting” from reaching the same highs as “Trainspotting” did. Perhaps, if we’re lucky, we’ll see “T3: Trainspotting” a few years from now (10-15?) when all of the characters are even older, with more wisdom, perspective, and shenanigans to get lost in. I’d certainly be in line with a ticket, ready for another adrenaline rush if that were to happen.