Surveying The Oscar Field: There Is No Front-Runner 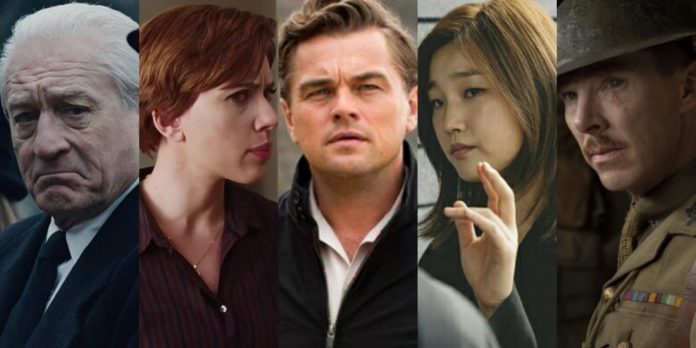 ​​Over the past few years, I’ve devoted a lot of my time and energy to the Next Best Picture Podcast, to provide you with my explanations and thought process behind the Oscar race. One thing I want to try this year (if time allows), is to put that into writing as best as I possibly can for those who may not listen to the show (which you totally should by the way). So here we are, post-Gotham Nominations, less than a month away from Phase Two officially kicking off (the critics’ awards) and I am here to survey the Oscar field.

We’re still in that part of the year where anything can happen and it’s the best place to be. We simply don’t know anything. Will “The Two Popes” join “Marriage Story” and “The Irishman” in the Best Picture race, giving Netflix three slots? Will “Parasite” be this year’s “Roma” and get across the board nominations in both above and below the line? Will there be a popular box office hit like “Black Panther” and “Bohemian Rhapsody” that grosses more than $500 million worldwide this year in the Best Picture conversation? Current contenders there include “Joker,” “Avengers: Endgame” and let’s just add “Star Wars: The Rise of Skywalker” to that group while we’re at it because we pretty much already know it’s going to do well. Will indie darlings from earlier in the year such as “The Farewell” and “Booksmart” factor in anywhere, or will it be dominated by films that premiered at Telluride onward? We simply do not know.

Unlike previous years, there is no front-runner for Best Picture at the moment. The past few years, “Roma,” “Three Billboards Outside Ebbing, Missouri” and “La La Land” each exploded onto the festival scene winning prizes early on, gaining critical attention and cementing themselves as the films to beat, and yes, they were all eventually beaten. Nobody wants to be the front-runner early. Nobody wants to have the giant target on their back. And even when you’re an undeniable choice such as “12 Years A Slave,” there will always be stiff competition coming your way from somewhere, like “Gravity.”

Predictions for Best Picture are all over the place. Some feel it will be Quentin Tarantino’s “Once Upon A Time In Hollywood” for how well it lovingly pays homage to a time some voters may or may remember while also giving us another entertaining entry into the two-time Academy Award winner’s already impressive (and soon to be over?) filmography. Voters may not want to risk granting a win to Tarantino’s next and possibly last film if it isn’t up to the standard that the director has set for himself. We know “Once Upon A Time In Hollywood” has the goods (even if some don’t particularly feel that way, the majority does) and its connection to the town where most voters reside may have the right amount of nostalgic pull to make them cast a vote for it.

​Some feel Best Picture could go once again to Martin Scorsese or Sam Mendes for “The Irishman” and “1917,” respectively. Both previous Best Picture/Best Director winners for “The Departed” and “American Beauty,” many feel their work this year would eclipse their previous wins. We know this to be true about “The Irishman,” which has been hailed as a masterpiece already by several people and is being seen as a culmination of sorts for Martin Scorsese and his legendary cast. The only thing holding it back at the moment is the fact that it’s a Netflix film and no matter how great the finished product is, there are some voters who will stick to their guns and not support the popular streaming service with a Best Picture win due to the fear of what it will symbolize for the future of the industry (aka: “Don’t take away our theaters!”). And if you think Scorsese’s comments about Marvel films will impact his chances or at least add to the backlash among Academy members, think again. They absolutely adore the man. Not even the film’s nearly three and a half hour runtime will stop voters from probably rewarding it. In fact, it’s not all that uncommon for the Academy to historically reward films over three hours in length. It just hasn’t happened since 2003 when “The Lord of the Rings: Return of the King” won but if you go back to films such as “Titanic,” “The Godfather: Part II,” “The Deer Hunter,” “Lawrence of Arabia,” “Ben Hur” and “Gone With The Wind” to name a few, it’s not completely uncommon. Sure, times and viewing habits may have changed, but don’t make the mistake in thinking that the Academy still doesn’t equate the biggest = the best.

“1917” is still a question mark as the film hasn’t officially premiered yet. However, “American Beauty’s” reputation has dwindled over the years (thanks to changing times and the involvement of Kevin Spacey), and Sam Mendes has always been respected among his peers, despite not having a Best Picture contender since his 1999 debut. After seeing the trailer and the behind the scenes video Universal dropped, many feel this will be something special and probably the technical achievement of the year, which has boded well for at least a Best Director win in recent years. With a shot at winning in categories such as Editing, Cinematography, Production Design, Score and both Sound awards, don’t be surprised to see Director come with them, too. Thus, “1917” may also win Best Picture if it has that much tech support.

Then there is “Marriage Story,” another Netflix film that the streaming studio is pushing equally as hard as “The Irishman.” After “Roma” lost Best Picture to “Green Book” last year, who can blame them for backing two contenders (and now, a possible third with the surprising amount of passionate support “The Two Popes” has been gaining at festivals) for the big prize this time around? Like “The Irishman,” Noah Baumbach’s “Marriage Story” is a culmination for the 50-year-old director, and it’s easily and definitively the best film he has ever made. It will more than likely, have the support of the acting branch (the biggest branch of the Academy) with a chance at nabbing three nominations for Adam Driver, Scarlett Johansson and Laura Dern. Pay attention on nomination morning to see if “The Irishman” (De Niro, Pacino, and Pesci), “Once Upon A Time In Hollywood” (DiCaprio, Pitt, and Robbie) or “Bombshell” (Theron, Lithgow, and Robbie, again) can get as many acting nominations as “Marriage Story.” The film also stands a strong chance to win Original Screenplay this year for Baumbach (with his biggest competition being Tarantino). It might be a consolation prize, in case his film doesn’t win Best Picture or it could be the prize that pushes the film closer to the big win. The only thing currently holding it back is how small and personal of a film it is. We haven’t seen winners such as this since the 1970s-80s, and considering it has been compared to 1979’s Best Picture winner “Kramer vs. Kramer,” I can understand why people would feel that way.

​Last but not least is Bong Joon Ho’s masterpiece, “Parasite.” A masterful film in every way, it has been winning since its premiere at the 2019 Cannes Film Festival earlier this year where it took home the Palme d’Or. It’s gone on to win critical support, becoming the most acclaimed film of the year, with many saying it’s one of the best films of the decade. And now, it’s been winning at the domestic box office, where the story of how far it will go keeps developing. After seeing how much the Academy embraced, not just “Roma” last year but also “Cold War” and “Never Look Away” with nominations elsewhere other than Best International Feature Film, the sky is the limit for Bong Joon Ho and “Parasite.” Many are predicting it will easily win Best International Feature Film but that it will also get nominations for Best Picture, Best Director, Best Original Screenplay and even a tech nomination or two. Obviously, the film faces more than a few hurdles to win Best Picture, for example, no foreign-language film has ever won Best Picture. Adding to that, no South Korean film has ever received a single Oscar nomination anywhere, period. Also, unless it receives an acting nomination for Song Kang-ho in Best Supporting Actor (another uphill battle, but after Maria de Tavira surprised us with a Best Supporting Actress nomination last year with zero precursor support, it’s not out of the realm of possibility), the film would be the first Best Picture winner since 2008’s “Slumdog Millionaire” to win without any acting nominations. Before that, the most recent example of a Best Picture winner without any acting nominations is 1995’s “Braveheart.” No matter how critically acclaimed, no matter how beloved, no matter how many critics’ awards it’s about to win, “Parasite” is at a disadvantage but hey, sometimes “the best plan is no plan”…am I right?

Maybe something other than these films will surprise us all. Maybe it will be the Toronto Audience Winner “Jojo Rabbit,” which despite it’s slightly below critical reactions from TIFF, has bounced back in recent weeks the more people see it and recognize it for what it is: an entertaining crowdpleaser with a strong and relevant anti-hate message. It could be “A Beautiful Day In The Neighborhood,” whose message of optimism and love (especially in these troubling times) could strongly resonate with voters. And speaking of strongly resonating with people, “Bombshell” is the definitive #MeToo movie we’ve received since the movement began and will no doubt, bring tears and stirring emotions to those who can set aside who it is about, and see it for what it is: a deeply empathetic look at how terrible the workplace has been for women and how that is finally starting to change for the better.

In the end, we simply don’t know. So many possibilities and with a shorter awards season this year, due to the pushed up voting dates and Oscar ceremony…so little time. I will be back to give you my thoughts on the acting and technical categories at a later date. But for now, what do you currently have winning Best Picture? Are you predicting a Best Picture/Best Director split? Let us know in the comments section below or on our Twitter account and be sure to check out our updated Oscar Predictions every Wednesday.