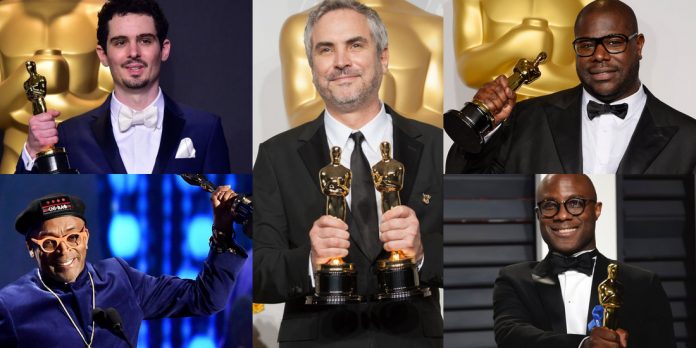 With the Venice, Telluride, and Toronto Film Festivals wrapped up, we’ve now got plenty of insight into the Oscar race. Most of the major contenders have premiered, giving us a clear picture of which films to keep an eye on. The Best Director race is heating up with previous winners, directorial debuts, unexpected hits, and more entering the fray.​

The Academy loves actors-turned-directors. They also love Bradley Cooper. He scored four nominations in three years, from 2013-15, and he could more than double that number this year alone for “A Star Is Born” (which he directed, produced, acted in, wrote, and wrote songs for). Clint Eastwood, Robert Redford, Kevin Costner, Woody Allen, Mel Gibson, and Warren Beatty are all actors who turned to directing and ended up winning Best Director at the Oscars. Even more actors have been nominated in the category, and some were famously snubbed (sorry Ben Affleck). Be prepared to add Cooper to that list after his debut film “A Star Is Born,” played at Venice and Toronto to an enthusiastic response.

Heading into the festivals, “A Star Is Born” already had plenty of hype to live up to. The rapturous praise that the film received only reinforced that hype. It’s the type of story that audiences and the Academy both love: it’s a grand, romantic story of fame and art, filled with original music and beautiful stars. Despite this being Cooper’s directorial debut, he’s clearly ready to compete with some of the best directors working today.

Interestingly, this year will see two pairs of directors who previously competed at the Oscars back in the race once again. Alfonso Cuarón won Best Director in 2013 for “Gravity,” while Steve McQueen won Best Picture for “12 Years A Slave.” Both return with their next films, Cuarón’s “Roma” and McQueen’s “Widows.” Additionally, Damien Chazelle, Best Director winner for “La La Land,” and Barry Jenkins, whose “Moonlight” won Best Picture, are both back as well. Chazelle’s “First Man” and Jenkins’ “If Beale Street Could Talk” have already premiered to raves. Both 2013 and 2016 were incredibly competitive Oscar races, and it’s exciting to see all four directors follow up their Oscar wins with such acclaimed films.

Of those four directors, the two Best Director winners seem most poised to repeat. “Roma” is the most definite contender. It scored big in Venice, winning the Golden Lion. It’s almost universally described as a masterpiece of filmmaking. This black and white film has been described as intimate, richly textured, and really special. It’s the type of deeply personal film that will resonate with many voters.

There are two things that could potentially work against it, however. First, it’s a Netflix film. Netflix has yet to receive a Director or Picture nomination. Last year proved that the Academy is warming up to Netflix, where they scored their first acting, writing, cinematography nominations for “Mudbound.” There are certainly still some who don’t appreciate that Netflix doesn’t give their films a real theatrical run at all, though they seem to be reconsidering that for “Roma.” It would certainly break new ground for a streaming service to receive such major nominations. Second, and far less importantly, the film is entirely in Spanish. Of course, many foreign language films have been nominated for Best Director, but it certainly isn’t common. It’s doubtful that that would hurt its chances at a Best Director nomination, but it’s always something to consider.

Following up “La La Land” and “Whiplash,” many worried that Damien Chazelle couldn’t live up his last two films. Once “First Man” premiered, those worries vanished. Chazelle has crafted a gritty, intense picture directed with confidence. Many have praised the way Chazelle balanced the mission and the man, calling the film intensely personal. This film is full of thrills, loss, and tension. He’s the youngest Best Director winner ever, and with a run of movies like this, Chazelle has a lot of love going his way. Sure, the film has one of the dumbest controversies of any awards season behind it, but that’s not going to come close to getting in the way of a Best Director nomination.

Yorgos Lanthimos’ “The Favourite” proved to be the director’s first across the board contender. Following up on his previous nominations for Best Foreign Language Film (“Dogtooth”) and Best Original Screenplay (“The Lobster”), Lanthimos is now in the hunt for his first Director nomination with his darkly comedic period piece. It seems likely, based on the wonderful reception the film has received. The film won the Grand Jury Prize out of Venice, along with Best Actress for Olivia Colman. Though Lanthimos may have a peculiar style, it seems that style works flawlessly in this period piece and could translate to his first nomination in this category provided that “The Favourite” is able to maintain its momentum all season long despite its idiosyncratic and unorthodox style.

Perhaps the biggest surprise of the festival was Marielle Heller’s “Can You Ever Forgive Me?” The Melissa McCarthy film received outstanding acclaim, thus launching it into contention in some categories we were not previously considering. As one of the only female directors with a film in this year’s race, Heller certainly has a significant shot at a nomination. She’s also coming off an acclaimed indie, “The Diary Of A Teenage Girl.” If the film can maintain the strong buzz that it built with audiences at the festivals, it’s easy to see Heller making the cut. In this day and age, a year without a female Best Director nominee certainly won’t go over well and if Heller’s film is clearly worthy enough after winning over audiences, then it should be considered.

Of course, it’s only September, so there are still a few films that have yet to premiere that could shake up the race. First and foremost, Adam McKay’s “Vice” is almost certain to be a contender. The Dick Cheney biopic is stacked with Oscar winners and nominees. Now, the film won’t premiere until mid-December. Normally this might be cause for concern, but it worked handsomely for McKay’s last film “The Big Short.” He scored his first Best Director nomination for that film and won Best Adapted Screenplay. With heavy makeup, political relevance and riding the wave of momentum from “The Big Short,” we should be prepared for “Vice” to change the race come December.

“Mary Queen Of Scots” is also making a mid-December premiere, though its position in the race is slightly more concerning. We’ve had a trailer for a while now and looks to contain showy performances from two Best Actress nominees from last year, Saoirse Ronan and Margot Robbie. So why hasn’t the film premiered at any festivals? It could mean nothing. Unlike “Vice,” we have no previous directorial work from Josie O’Rourke to reassure us of the film’s quality. The trailer looked great, it’s just hard not to worry about the late release date and lack of festival promotion.

Also awaiting a premiere is James Gray’s “Ad Astra.” Without a trailer, promotional material, or even a confirmed limited release for 2018, this is a gigantic question mark in the race. It wasn’t too long ago that Martin Scorsese’s film “Silence” fell into a similar trap, with no promotional material until November for its late December release. While that film did not fully contend in the Oscar race as some were predicting, James Gray is an acclaimed director tackling a unique original sci-fi project filled with big stars and has been on a trajectory towards his first nomination for a bit now. It’s worth keeping an eye on.

“BlacKkKlansman” is one of the only films to have already been released wide that could contend in Best Director. Spike Lee is clearly overdue for his first nomination in this category despite being nominated for Best Adapted Screenplay and Best Documentary Feature. Two years ago, the Academy decided to reward him with an Honorary Oscar for his contributions towards the industry. Little did they know he would come roaring back a few years later with a film as successful and powerful as “BlacKkKlansman.” The film was highly acclaimed, though perhaps more for its screenplay than its direction. The early release date may hinder its chances, but the beloved and respected Spike Lee will be in the hunt for a nomination.

There are a few other directors still in the race. Though Jason Reitman’s “The Front Runner” landed with some disappointment at festivals but it’s still possible it catches on with bigger audiences. Karyn Kusama’s “Destroyer” is earning raves for Nicole Kidman’s performance, though Kidman feels like a lone nominee. If “Black Panther” can ride the current wave of support, along with a push from the silly Popular Film Category debacle, Ryan Coogler could find himself nominated as well. Clint Eastwood has “The Mule” in the works, and he’s certainly able to quickly throw a film together and score a nomination at the last possible moment. We’ll see if that lands a qualifying run soon.

As of right now, these are my own predictions for the Best Director race as of today…

What are your current predictions for Best Director? Take a look at our full predictions here from the rest of the Next Best Picture team and let us know your thoughts in the comments section below.