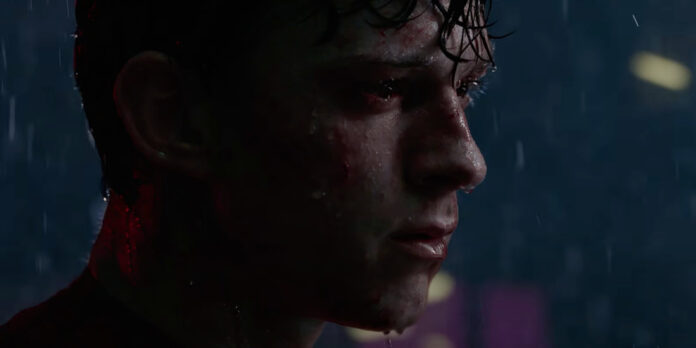 THE STORY – With Spider-Man’s identity now revealed, our friendly neighborhood web-slinger is unmasked and no longer able to separate his normal life as Peter Parker from the high stakes of being a superhero. When Peter asks for help from Doctor Strange, the stakes become even more dangerous, forcing him to discover what it truly means to be Spider-Man.

​​After nearly two years of the pandemic, it’s fair to say no other film has been more anticipated or feels as large in 2021 as Jon Watts’ third installment in the Tom Holland MCU/Sony standalone “Spider-Man” films. “Spider-Man: No Way Home” is a highly ambitious project which attempts to both wrap up the story of this version of Peter Parker (for no one knows definitively if Sony and Marvel will be able to strike up another deal to use the character in the MCU again) while also opening up the world to new possibilities due to the inclusion of what is known as the multiverse, an infinite amount of parallel realms of existence and universes. For the sake of spoilers, I will do my best to discuss my feelings towards the final film, but only as it relates to what has been revealed in the marketing materials so far. Suffice to say, the anticipation and hype for this film have been met, although not necessarily exceeded.

Picking up moments after the events of “Spider-Man: Far From Home,” Quentin Beck aka. “Mysterio’s” death has been laid at the feet of Spider-Man, and J. Jonah Jameson (a returning but underutilized J.K. Simmons) of TheDailyBugle.net has revealed to the world that Spider-Man’s identity is Peter Parker (Tom Holland). The police are looking to charge Peter with vigilantism and murder. At the same time, he’s ending his senior year of high school by starting the college admissions process for MIT, where he hopes he, his girlfriend MJ (Zendaya), and his best friend Ned (Jacob Batalon) will all be accepted. Unfortunately, they are all rejected due to the recent controversy surrounding Peter, and his Aunt May is forced to relocate to Happy’s (Jon Favreau) apartment until the harassment from the press dies down, if ever. Seeking a resolution that will help clear his friends and family from his latest trouble, Peter seeks the help of Doctor Strange (Benedict Cumberbatch) to perform a spell that will make it so that no one remembers he is Spider-Man. Mid-spell, Peter tampers with Strange’s efforts, for he does not want those closest to him forgetting he’s Spider-Man. The result is the multiverse breaking open and unleashing foes from alternative universes of Spider-Man into Peter’s existing reality, including Max Dillon, aka. “Electro” (“The Amazing Spider-Man 2’s” Jamie Foxx), Dr. Otto Octavius, aka. “Doc Ock” (“Spider-Man 2’s” Alfred Molina), Dr. Curt Connors, aka. “Lizard” (“The Amazing Spider-Man’s” Rhys Ifans), Flint Marko, aka. “Sandman” (“Spider-Man 3’s” Thomas Haden Church) and Dr. Norman Osborn, aka. “Green Goblin” (“Spider-Man’s” Willem Dafoe). With the help of his friends and new ones, Peter will face his greatest challenge yet as he attempts to send each one of these supervillains back home.

Focusing on themes of selfishness, human connection, and identity, it’s easy to see “Spider-Man: No Way Home” as a bombastic smattering of fan service, but credit must be given to director Jon Watts, his writers and Tom Holland, who, by this point, know the character of Peter Parker so well they’re able to hammer the emotional journey of the character home with some of the most dramatic moments of the series. Holland, in particular, turns in what is not only his best performance to date as the masked superhero but quite possibly his best performance overall. The twenty-five-year-old actor has to convey still all of the lovable qualities of Peter Parker he has carefully spent the last few films cultivating and push himself into deeper emotional territory than he has traveled to before. Holland has always been an expressive actor, whether it was communicating Peter’s insecurities, strength, warmth, or humor, but here he unleashes a side of Peter we haven’t really seen before, making this his darkest and most dynamic effort yet.

Much of what makes Holland’s performance work as well as it does are the relationships he and Watts have spent the previous two films building upon for this third (and possibly final?) film. The screenplay always finds clever ways for MJ and Ned to help Peter throughout his journey, even if it sometimes stretches believability for how two human characters could survive such perilous carnage. However, what helps to sell it is the genuine sense of affection each character has for the other. We know that these characters would never abandon each other, no matter the circumstance, and this endearing quality of devotion helps to give “Spider-Man: No Way Home” the emotional backbone it needs to make everything else worth it. The investment we as an audience have spent with them over the course of three standalone films pays dividends as Peter eventually learns rather harshly what true selflessness means in the face of a catastrophic event.

Considering other “Spider-Man” films have suffered from the “too many villains” problem before, having Peter Parker go up against a horde of bad guys may not be the best storytelling decision in the world. However, considering the immense success of Sony’s Oscar-winning animated film “Spider-Man: Into The Spider-Verse,” we all knew a story such as this set in the live-action world couldn’t be too far around the corner. Lo and behold, we finally have it, and there are, unfortunately, some clunky beats along the way. While the story does not need to set up any new characters, the lack of a new villain can make “Spider-Man: No Way Home” feel repetitive and redundant. Sure, it’s great seeing Electro’s updated look, Doc Ock’s robotic tentacle arms in action once again, and other moments involving all of these actors reprising their roles, most notably Willem Dafoe, who is relishing in every moment he has on screen as the sinister Green Goblin again. However, two characters spend 98% of their time on screen as their fully CGI selves (Sandman and Lizard), and outside of a few tiny moments of resolution, catharsis, and added character development; not much is gained from re-introducing these characters into Peter Parker’s story again other than for the sheer spectacle of combining other characters from our nostalgics pasts into a single movie.

No one has any new powers to speak of, so all of the CGI action scenes have a feeling of “been there, done that.” The same complaint extends to Doctor Strange, although he and Peter Parker have a dazzling conflict and ensuing fight over whether Peter should attempt to save the supervillains from their fate (aka. dying at the hands of Spider-Man) with some notably sensational visual effects work. The average CGI overloaded action setpieces will be forgiven if you’re already invested in the characters from the previous “Spider-Man” films as “Spider-Man: No Way Home” crams in a ton of callbacks that may fly over audiences’ heads if they haven’t revisited those films in a while. Bless Willem Dafoe, though, who is easily the MVP of the villainous bunch as he turns in another tortured, tragic and deranged performance which reminds us why he was such an iconic adversary to Peter Parker in the first place.

“With great power comes great responsibility,” and Jon Watts, his writers, Tom Holland, and the rest of the team know the expectations which have been placed upon them with this franchise. In many ways, “Spider-Man: No Way Home” not only closes the loop on this latest incarnation of Peter Parker but also on the character’s entire run with Sony since Sam Rami’s groundbreaking 2002 film giving it a sense of closure that should this be the end, would function as a truly fitting send-off for these characters. While we don’t know for sure if this is the last time we’ll see Tom Holland or the other actors involved, this does feel like the end of an era, and the beginning of something new, not just in the franchise but in the MCU as a whole as Doctor Strange will have to contend with the ramifications of the multiverse in the upcoming “Doctor Strange in the Multiverse of Madness” (which is ironically also directed by Rami). With a near two and a half hour running time, enough villains to fill up multiple movies, and plenty of shocking developments, it’s surprising that “Spider-Man: No Way Home” manages to find a way to satisfy expectations. I cannot say it surpassed them, though. Some surprises were indeed predictable, numerous bits of awkward humor don’t consistently land, and the act of juggling this many characters, as courageous as it is, sometimes fails to issue a more significant point towards the emotional journey of Peter Parker rather than catering towards fan service. Still, despite this, “Spider-Man: No Way Home” is the movie event of the holiday season, with an emotionally driven performance from Tom Holland and will undoubtedly please fans eager to see the film they have been waiting anxiously for months to see. They can rest assured, “Spider-Man: No Way Home” is definitely the film they are hoping for, even if it’s not a perfect all-timer or even the greatest Spider-Man film.