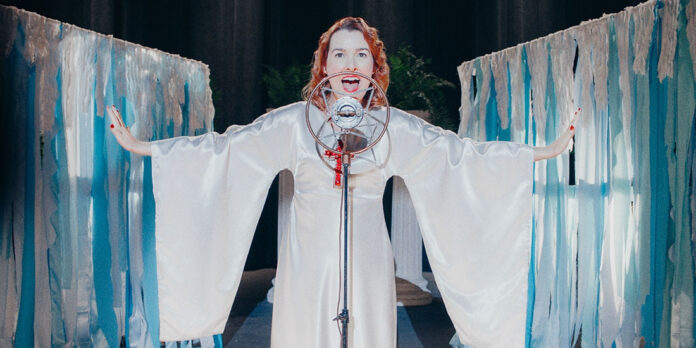 THE STORY – The sensational evangelist Sister Aimee Semple McPherson has pulled off her latest marvel: vanishing in plain sight of a devout disciple! Except that this disappearance was a cleverly orchestrated ploy to run away with her lover, a married writer named Kenny. Outfitted with new identities and a courageous guide named Rey, Aimee and Kenny head for Mexico, searching for inspiration and adventure. When Aimee tires of Kenny’s literary ineptitude, she enlists Rey’s help to ditch him in the desert. Yet getting Aimee back to Los Angeles—where the news, the police, and her devotees are anxiously searching for her—will take a real miracle.​

​​​​If you had ever found yourself asking “what would happen if you threw “Florence Foster Jenkins,” “La La Land,” the films of Wes Anderson, “No Country for Old Man” and that subplot from “Game of Thrones” where Arya and The Hound go around killing people together into a blender and made a movie out of it,” you have your answer. Part musical, part goofy period piece, and part ruthless western, “Sister Aimee” is exactly as insane and messy as that description sounds. About half the time, it doesn’t work. But when it works, it works spectacularly.

Based (loosely) on a true story, evangelist and performer Sister Aimee (Anna Margaret Hollyman) becomes complacent with her existence and is swept off her feet by a blowhard writer with delusions of grandeur (Michael Mosley), the two decide to fake her death and set off on a journey across the southwest in an attempt to hunt down a near-mythical Mexican folk hero, using the mysterious Rey (Andrea Suarez Paz) as their guide. Shenanigans ensue.

With so many genres and tones on display, it’s almost impossible for everything to land. First, the good: Anna Margaret Hollyman is a star in the making. Her comic timing is impeccable, and she’s a fantastic dancer and singer (yes, there is a full tap musical number). If Hollyman captures the film’s absurdist comedy side, Suarez Paz captures its dramatic heart. The two bounce off each other nicely, somehow keeping the train on the tracks, even as they seem to have harkened from two entirely different films. Mosley is amusing as a believable douchebag, as are cameos by indie staples like Macon Blair.

Technically the film is well crafted. The pacing is inconsistent but the flash, bang, and pop of the 20s news broadcast style cuts keeps the film lively. The low budget costumes and production design effectively recreate the era with a touch of absurdity embedded, while cinematographer Carlos Valdés-Lora lenses the film with a deep appreciation for old west style vistas.

And of course, we have to single out the film’s many themes. Part of the problems stems from trying to tackle too much. But some of the themes are well explored. Chief among them is the entire concept of myth-making and masculine interpretations of heroes.  Mosley’s character embodies the ignorant patriarchal history makers who have ensured that history has remained a boys club for thousands of years. The film approaches this historical trend with righteous indignation, penning a love letter to the unsung female heroes of history. In addition, it gleefully skewers the “Douchebag Foster Wallace male wannabe writer” figure.

What doesn’t work? The film can’t decide on a tone. We have absurdist comedy one moment, and then gruesome throat slitting the next. When the film goes for comedy, the humor is more of the “gentle chuckle” nature as opposed to laughing out loud. And then the film’s second act becomes largely serious. And it’s here where the film’s pacing drags the most as it transforms into a drama. Fortunately, it sticks the landing with a hysterical ending complete with a memorable musical number. Perhaps it’s 2019’s first Original Song Oscar contender.

In short, not everything in “Sister Aimee” works. It is certainly unique though and you likely won’t see anything else quite like it at Sundance. There’s raw potential here that could build into something truly great on a future effort with a narrower focus. And watch out for Hollyman. She’s certainly going places.