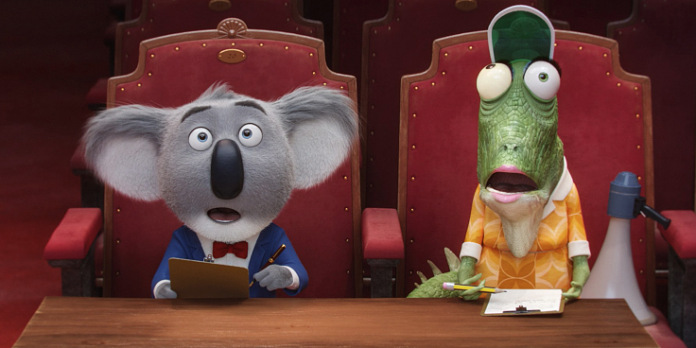 THE STORY – Dapper Koala Buster Moon presides over a once-grand theater that has fallen on hard times. An eternal optimist, and a bit of a scoundrel, he loves his theater above all and will do anything to preserve it. Facing the crumbling of his life’s ambition, he takes one final chance to restore his fading jewel to its former glory by producing the world’s greatest singing competition. Five contestants emerge: a mouse, a timid elephant, a pig, a gorilla and a punk-rock porcupine.
​
THE CAST – Matthew McConaughey, Reese Witherspoon, Seth MacFarlane, Scarlett Johansson, John C. Reilly, Tori Kelly, Taron Egerton & Nick Kroll
​
THE TEAM – Garth Jennings (Director/Writer)
​
THE RUNNING TIME – 110 Minutes

​”Sing” is not Illumination Entertainment’s best film nor is it their worst. It’s a well intentioned, good hearted film filled with an energetic voice cast that sends a good message to kids about believing in yourselves and living out your dreams. There are numerous songs that are sung by the voice cast which you can hear on the radio today and all of this is simply all a disguise for a film that is not that original nor very good. Don’t get me wrong, “Sing” is the perfect kind of movie to take your children to and is by no means a terrible movie. However, in an overly saturated marketplace and with better options currently playing (“Moana“), “Sing” feels like a second or third tier kind of film that never finds the right tone nor hits the highest pitch.

A koala bear named Buster Moon (Matthew McConaughey) runs a down on its luck theater with big dreams and a love for the theater and all of its performers. On his last leg and running the risk of losing the theater his late father helped him acquire, Buster puts together an idea to hold a singing competition which will call upon any and every animal in the city to sing their hearts out and win a grand prize of $100,000. This once in a lifetime opportunity draws different types of animals from all walks of life including a wise-cracking mouse named Mike (Seth McFarlane), an elephant named Meena that has stage fright (Tori Kelly), a housewife pig with 2 children named Rosita (Reese Witherspoon), a punk-rock porcupine named Ashley who is having boyfriend issues and a gorilla named Johnny (Taron Egerton) that is struggling to follow his dreams of becoming a singer while his criminal father wants nothing more than for his son to follow in his footsteps.

“Sing” lives and breathes through its songs and the talents of its voice cast. Matthew McConaughey leads the charge with an energetic performance that is warm and inspiring. Seth McFarlane also makes an impression with a humorous portrayal of a small-time mouse crook with an old school flair. Taron Egerton is completely vulnerable as the cockney-accented gorilla who is seeking his father’s approval by making his own way in life. And Tori Kelly hits all of the right notes in her beautiful singing as well as her nervousness of being on stage. All of these characters and even a few more (John C. Reilly and Jennifer Saunders are so enjoyable) help to elevate “Sing” beyond its simple storytelling and repeated themes that we’ve heard in countless animated films before.

The film ultimately does not work due to its unwillingness to give audiences something other than the standard and generic kiddy-fare. The characters and the struggles that they are going through are interesting to a certain degree but writer and director Garth Jennings does not go deep enough into his characters and their stories, mostly because he is trying to tell them all simultaneously. The potential was there for a story such as this to touch further upon some of the issues which are brought up (Parent/child acceptance, gender equality, etc.) but Jennings appears to be catering to the kids with his musical film and does not seem to interested in hitting both demographics.

So while “Sing” is enjoyable for the most part, it is nowhere near as good as it could have been. A story that tries to do too much and ends up doing too little is the best way to summarize a film such as this. The voice cast and the selection of numerous popular songs does the best it can to mask that there is simply not enough going on under the surface of “Sing” but this reviewer can spot a false note when I hear one and a mediocre film when I see one.