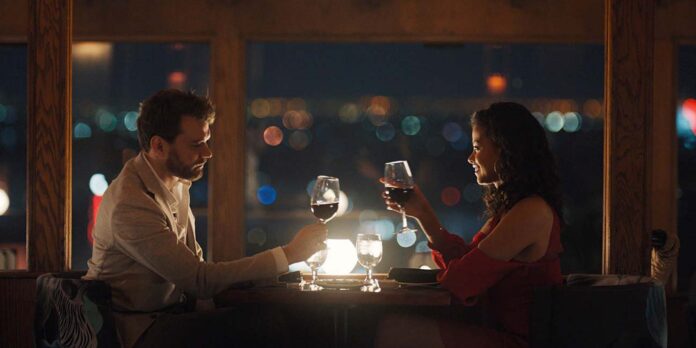 THE STORY – Initially apprehensive when her boss insists she meets with one of his most important clients, single mom Cherie is relieved and excited when she meets charismatic Ethan. But at the end of the night, he reveals his true, violent nature.

First dates can be a mixed bag. They might lead to finding “the one.” But on the other hand, they can be awkward interactions. Or, as in Cherie’s case in “Run Sweetheart Run,” they could lead to discovering one of the actual monsters in the world. Shana Feste’s horror thriller “Run Sweetheart Run” takes on misogyny and the #MeToo movement with the “date gone horribly wrong” premise. It starts off on the right track but slowly loses steam as the action progresses. Plus, with a script so underwritten, it fails to give answers to some of its biggest questions.

Cherie (Ella Balinska) is a single mother with the dreams of becoming a lawyer. One day, her boss (Clark Gregg) sets her up with one of his most important clients, Ethan (Pilou Asbæk), and though she’s apprehensive at first, she decides to go on a date with him. To her surprise, he’s handsome, charming, and quite a gentleman – aside from the fact that he has an outburst when a dog approaches him. Everything goes so well that Cherie even decides to take him up on his offer for a drink back at his place. But then Ethan turns directly to the audience with a sinister look and closes the door. As the camera zooms out slowly, we hear chaos ensuing inside, and moments later, Cherie steps out with a ripped dress, no shoes, and makeup smeared. Her purse and phone are inside, and she has to run for her life in the streets of Los Angeles to find help. But as she attempts to explain what happened to her, most think she’s either drunk or a sex worker and, therefore, is taken to jail. So when Ethan shows up in her cell, he tells her he’s going to hunt her all night, and if she makes it to dawn, she’s free.

It’s not clear from the start who, or what, Ethan is. Still, it’s revealed later that he’s a bionic monster that can bite people’s heads off – as seen with one of the people who Cherie turns to for help – and has a keen sense of smell – he can smell her blood everywhere, and unfortunately, she just started her period. But based on all of the missing posters of women all over town, this isn’t the first woman he’s terrorized. But why he does this or what he exactly is are never answered, which leads to more frustration than amusement. Toward the end of the film, when Cherie finds a safe house for other women who have gone through similar trauma led by the First Lady (Shohreh Aghdashloo), so much is introduced again, yet so little is explained. But the film is about female empowerment and sticking it to the man or monster, and many will get behind that message.

With what is given, Balinska does a solid job making her way through this horrific night filled with oppressive power structures and abuse in almost every situation. She hooks us in from the start with her charisma and keeps us rooting for her throughout, although there are moments where it’s hard to stomach what’s happening to her character (and it may be triggering to some). The film pushes the envelope in many ways, especially in how it’s not afraid to make almost every man the literal worst. Asbæk takes the crown with his performance as the deadly Ethan, who grows increasingly terrifying as more of his character is revealed.

While “Run Sweetheart Run” has a thrilling start, its underdeveloped script causes multiple problems. The film does earn applause for its lead actors and empowering female story, particularly the way it’s not afraid to show and talk extensively about periods. It’s irritating and inconvenient to bleed, whether or not a monster is chasing you, but most films stay as far away from that territory as possible, or at the very least make a mere mention of it. But Feste factors this detail in from the start, and it’s so refreshing to see.