“ROADRUNNER: A FILM ABOUT ANTHONY BOURDAIN” 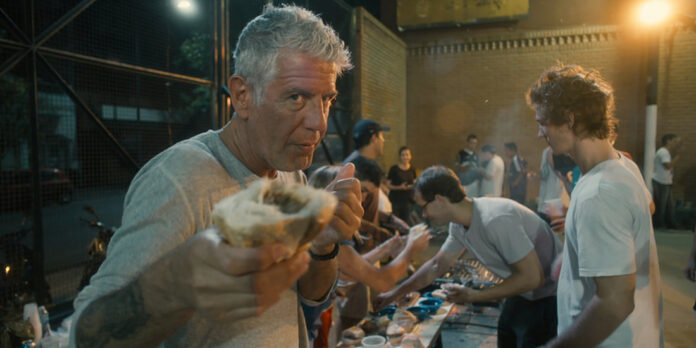 THE STORY – A documentary about Anthony Bourdain and his career as a chef, writer and host, revered and renowned for his authentic approach to food, culture and travel.
​
THE CAST – Anthony Bourdain

Few names in the world of food and travel were as widely recognizable as Anthony Bourdain. Throughout the 21st century, he hosted TV shows dedicated to exploring the world and sampling food. His public persona exuded such a lust for life that his tragic suicide shocked the world in 2018. Why did this happen to a man that, for better or worse, was wildly successful? What lead to that moment for him? Perhaps asking questions about his suicide is futile, for Bourdain never left a note. We may never fully know what happened to Bourdain in the final moments of his life, but “Roadrunner: A Film About Anthony Bourdain” does an admirable job of trying to capture who he was before that moment.

Biographical documentaries always have a challenging course to chart in distinguishing themselves. Often, they are defined by talking heads, B-roll footage and fail to encompass what drew people to the subject in the first place. “Roadrunner: A Film About Anthony Bourdain” features many of those same talking heads but also benefits from the fact that much of Bourdain’s day-to-day life was meticulously documented on film. Director Morgan Neville (“Won’t You Be My Neighbor?“) clearly had access to hundreds of hours of footage. If he never cracks the cipher of who Bourdain was, the extensive glimpses into his life we are provided with certainly help us understand why so many were drawn to him.

We see Bourdain’s highs and lows, the quirks of his personality, the magnetism, but also the deep sadness that he rarely allowed the world to see. The footage is immensely revealing, and to Neville’s credit, he often lets it speak for itself. The interviews with those who knew Bourdain best are intimate and earnest – there’s no shying away from discussing his flaws. Neville seems to know that showing this raw footage from Bourdain’s life, not the storytelling by the filmmaker or interviewees, is what best reveals Bourdain to us, especially those unfamiliar with him.

The film is at its weakest when it tries to explain Bourdain’s appeal; when it tries to touch on every aspect. For example, the film spends two minutes showing how Bourdain was political, but it does not explore this topic any further. It seems as though the film wants to hit a checklist of Bourdain’s life and achievements economically for the sake of the runtime, thus sacrificing the more minor details along the way.

Technically, the film is crafted well enough. Film fans will appreciate the sheer number of references both musically and visually (including clips) to classic cinema. The music choices are mostly strong, although Brian Eno’s “The Big Ship,” previously used in “The End of the Tour” to put a capper on the commemoration of another life lost too young (David Foster Wallace), feels out of place in the film (perhaps used too early). Still, it fits best as an emotional climax.

When the topic of Bourdain’s final moments comes up, there is evident anger, frustration, and sadness from all involved, leaving us with complex emotions on how to feel about the man overall and the film’s stance on him. Morgan Neville seems to put the blame on Bourdain’s troubled relationship with his ex-girlfriend Asia Argento (who was not interviewed for the film), which comes off as very one-sided and altogether troubling for the viewer. Despite this ethically questionable approach, this showcase of Bourdain’s life can be quite moving at times. The interviews are emotional, and the film has an empathetic lens. Again, it never thoroughly answers the question of who Bourdain was and what made him tick, especially in the lead-up to his suicide. But it certainly functions as a touching tribute to his life and offers those who may not have known who he was that well ample takeaways about what made Anthony Bourdain, Anthony Bourdain. Above all, it reminds us why we miss him and why his work mattered to so many people.