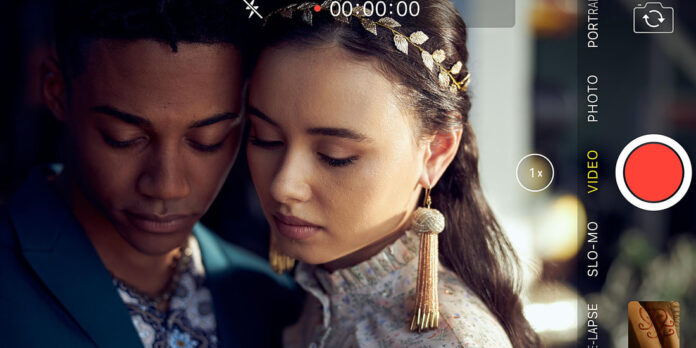 THE STORY – In fair Verona, a war as old as time is brewing between rival houses—but it’s being captured in a new way. Montague and Capulet Gen Zers are using their cell phones to document the eruptions of violence plaguing their communities. In the middle of it all, Romeo discovers Juliet’s artwork at a party, and the two inevitably fall in love. As tensions between their families escalate, the two plead for peace and desperately search for a way to escape their star-crossed destiny.
​
THE CAST – Camaron Engels, Francesca Noel, David Zayas, Diego Tinoco, Siddiq Saunderson & Russell Hornsby

​​​Here’s the thing about Shakespeare – I love the guy, but I’m not at all precious about his work when it comes to adaptations. All that I ask for is the quality and logical transfer of The Bard’s ideas. A modern-day “Romeo and Juliet” set inside smartphone apps? Sure! But unfortunately, “R#J” is inconsistent with its ideas and is ultimately a version of this oft-told story that inspires frustration rather than pathos.

You know this one: two households, both alike in dignity, terrorize the town and two of their youngest fall in love despite their families’ bad blood. “R#J” takes place in present-day California where words are exchanged online with even more frequency than they are in-person. The film takes place entirely behind a cell phone screen, switching between Romeo and Juliet’s devices as they comment, post, and stream their way through the classic doomed love story.

Again, this concept has potential. But unfortunately, “R#J” doesn’t follow internal logic when it comes to its own adaptive choices. When speaking face-to-face, whether in-person or via video chat, the characters speak in Shakespeare’s exact words. That makes for some strange moments of clashing styles (to be fair, it’s hard to sell a line like “You are a saucy boy” no matter when and where you set your story), but this is common of many Shakespearean reimaginings, so it’s not a point of contention. What is an issue, however, is the fact that when the characters are communicating through comments or texts, the film drops this choice. All written phone-based dialogue is in the language of the present day. This strange decision may have been intended to serve as some sort of commentary on how we communicate online in contrast to real life, but it only confounds and distracts. This distinction is further weakened by the fact that the characters often make tossed-off comments and asides in modern vernacular during the scenes of verbal dialogue. Again, I’m sure there is a reason for this consistent and casual breaking of the film’s own rules, but I couldn’t tell you what it is.

In any adaptation, creative liberties are necessary. Some of Shakespeare’s greatest retellings, like “West Side Story” and “The Lion King,” make huge changes to the original story to carve out their own unique take. But when an adaptation sticks so closely to the source material, as “R#J” unceasingly does, any deviations stick out and only stupefy. The most glaring of these alterations is the strange decision to explain the back-story behind the families’ long-lasting dispute. Shakespeare’s choice to never fully lay out just why the Montagues and the Capulets are fighting is one of the more brilliant aspects of his play. It allows the audience to never fully take a side and forces them to look at the story from an objective point of view. Fleshing out this part of the narrative paradoxically muddies the story rather than bringing any sort of new revelations. I know it might seem silly to not spoil the ending of a 400-year-old piece of literature, but this movie does something with it that I’m sure will make anyone with an appreciation of the original play supremely frustrated.

“R#J” is a noble effort in its conception, but its execution-only exacerbates it. There are some, admittedly, clever adaptive moments – the comment section under the many live videos are often filled with genuinely funny quips – but they are far too few to call the film a successful reimagining. It is a common misconception that “wherefore art thou Romeo?” is a question about the hero’s location, but “wherefore” actually translates to “why.” To this movie, I ask, “wherefore?”