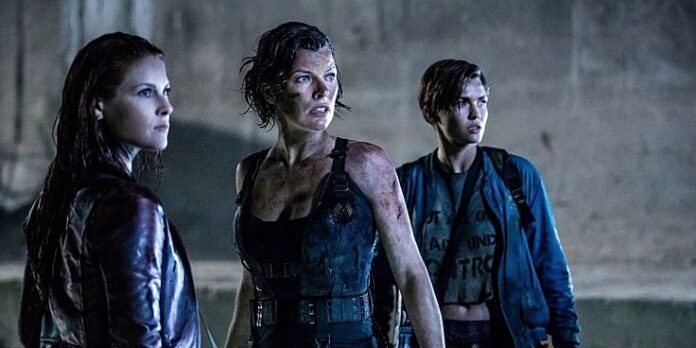 THE STORY – Picking up immediately after the events in Resident Evil: Retribution, Alice (Milla Jovovich) is the only survivor of what was meant to be humanity’s final stand against the undead.

Well, thank god that is finally over. I have never been a fan of the “Resident Evil” film franchise and have only ever seen each film once. However, there is no past knowledge needed to realize that “Resident Evil: The Final Chapter” is an absolutely horrendously made film with more jump cuts than one can possibly comprehend. Not a single thing that this film sets out to do, does it get right. Action beats are chaotic and messy. Dialogue is atrocious. Characters come back to life who you previously thought were dead and nobody in the story seems to actually matter other than Alice. On every single level, “Resident Evil: The Final Chapter” is an abomination of filmmaking.

Taking place following the events of “Resident Evil: Retribution,” Alice (Milla Jovovich) is in Washington D.C. and must head back to “where it all began,” The Hive in Raccoon City. She is being aided by The Red Queen (Ever Anderson) to return to the city and put an end once and for all to the zombie apocalypse by acquiring a cure for the T-virus. Along the way, she encounters a clone of Dr. Isaacs (Iain Glen) who will stop at nothing to prevent Alice from completing her mission.

I sincerely hope that the title of the film is honest and true. I never want to see another one of these movies ever again. And if by some miracle I had to, I would hope that Paul W.S. Anderson was kept away from writing the script or directing it. Even Milla Jovovich, who I am a fan of in some of her other films, looks absolutely bored at this point for nothing in this series has helped to define the character of Alice. She is a live action figure who looks good kicking zombie ass and that is it. Now, you might turn around and say to me, “But I don’t care about character or plot, I just want to see some action.” Well, you’re going to be disappointed there as well because “Resident Evil: The Final Chapter” feels like it was shot by a one armed cameraman who has one eye and then whatever footage he was able to capture was butchered to death in the editing room. It got to a point where I could barely look at the screen anymore due to how dizzy I was getting. Even during what should be one of the film’s better set-pieces, a raid on the defended city is so poorly constructed, edited and shot that for long stretches of time I found myself totally uninterested in what was going on. I was amazed any time a single shot lasted longer than 3 seconds. The record I counted was 4 before I stopped caring. Even the big emotional payoff at the end feels unearned after 7 films. Instead, it’s more of a relief.

I wish I could go into detail about the side characters but other than Iain Glen (Who should not even be in this film anyways, yet here he is), and The Red Queen (Who’s not even human) there is nothing to write home about when it comes to “Resident Evil: The Final Chapter” except how truly awful it is. Despite wrapping up Alice’s story and resolving the zombie apocalypse, Paul W.S. Anderson has the nerve to lay the groundwork for a potential return to this series which should never have last 15 years to begin with. Buildings explode, bullets are fired, body parts are cut and zombies are there somewhere. However, I could not care less for the filmmakers have not given me a reason to do so. Please let this be the end. Please.