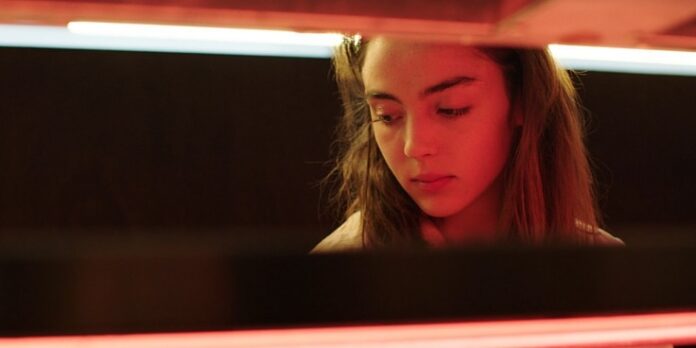 THE STORY – Stringent vegetarian Justine (Garance Marillier) encounters a decadent, merciless and dangerously seductive world during her first week at veterinary school. Desperate to fit in, she strays from her principles and eats raw meat for the first time. The young woman soon experiences terrible and unexpected consequences as her true self begins to emerge.

“Raw” lives up to its name and then some, providing us with a hypnotic coming of age (Or is it rage?) story that will have audiences squirming from its gruesome body horror. Taking a page out of David Cronenberg’s book, “Raw” takes a look at cannibalism through the eyes of an adolescent teenage girl and the symbolism and allegories it comes away with due to its premise is truly ingenious. This French foreign language film is confident in its storytelling and provides non-stop moments and images of horror that would make David Lynch proud.

Justine (Garance Marillier) is a sixteen year old first-year “rookie” at a veterinary school in France where she joins her older sister Alexia (Ella Rumpf). Their parents are also alumni of this school and right from the get-go, Justine is plunged into a world of non-stop partying and hazing. Such hazing occurs right away where Justine, a vegetarian, is forced to eat meat as part of her initiation. She breaks out into an uncomfortable skin rash due to a reaction and she mysteriously starts to enjoy the taste of meat. That craving eventually turns violent as she begins to desire human flesh and sets her eyes on her gay roommate Adrian (Rabah Naït Oufella) as the potential next course.

First-time feature-length director, Julia Ducournau, does a wonderful job of utilizing all of the tools within the filmmaker’s toolbox to provide us with something that may not have anything unique to say but certainly, tells it in a unique way. I mean, how many erotic, violent, cannibalism coming of age stories can you name? Ducournau shows that she is in complete control of the camera, her actors and the soundscape of the film. The soundtrack, in particular, is constantly surprising you with its off-kilter tracks. And newcomer Garance Marillier gives us one of the most daring debuts of the year with her, pardon the pun, raw portrayal of a girl coming into her own as a woman and how horrifying that experience can be. The relationship she shares with her sister, portrayed by Ella Rumpf, is fascinating and reaches new layers as the film progresses, crafting a sibling bond that is just as bizarre as it is loving.

“Raw” is definitely not for everyone. The film pulls no punches in its depiction of cannibalism, sex, and violence. It will most likely offend many just as much as it will captivate. The balance which is struck by Ducournau to satisfy as wide as an audience as possible with such controversial pieces is admirable and deserves to be respected. Its not merely just shocks for the sake of shocks. There is some real substance to the grizzly images put on screen and the pairing of Ducournau and Marillier helps to solidify this. As an arthouse film, “Raw” has deliberate pacing that is offset by its downright weirdness and bravery with which it embraces it. I would not call it a game changer by any means but its certainly one of the best debut films I am likely to see all year.

“Raw” is a film that is all about discovery. Discovery of your own potential. Your own desires. Your own appetites for who and what you want. On the surface, “Raw” may not look like the most flattering of films to sit down, watch and digest. However, once it sinks its teeth into you, it becomes very hard to resist its erotic and forceful hold over you. It’s sexy, brash, daring and riveting. Featuring a startling directorial debut and an equally amazing debut performance from Garance Marillier, “Raw” has just the right amount of taste to lure audiences to the table.