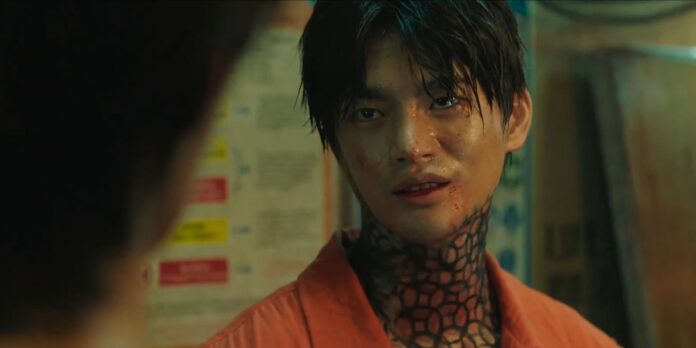 THE STORY – When efforts to extradite notorious convicts from the Philippines to South Korea are stymied by a deadly airport bombing, the Korean authorities commandeer the cargo freighter, Frontier Wolf, for their next transfer. As a rogues’ gallery of lowlifes, including a callous heir to a criminal empire (Seo In-guk), board the titanic vessel, they are escorted by two dozen hardened detectives, and the vigilant oversight of a hot-headed Coast Guard captain (Sung Dong-il). Despite the heavy security, a plot to seize control of the ship percolates among the prisoners and soon boils over, but what neither cop nor crook appear to be privy to is that they are not the freighter’s only cargo.

Bon voyage! “Project Wolf Hunting,” the new bloody bloody bloody action film from director Kim Hongsun, invites audiences aboard a doomed extradition cruise where no one is safe. It’s the kind of film that, smartly, begins as one type of story and eventually reveals itself to be something else entirely, leading to endlessly creative violence. The slight plot is merely a means to gory ends, but if that’s exactly what audiences seek, that may not matter much.

A group of dangerous criminals have been rounded up and are being shipped from the Philippines back to South Korea on a huge cargo ship. But as the authorities onboard soon discover, putting a large collection of convicts on a contained vessel isn’t the best idea, no matter how heavy the chains they’ve been secured with may be. With little effort, the criminals quickly overtake the ship and place themselves in charge of the very people that are meant to control them. But something even more terrifying than either the vengeful convicts or the well-trained police lurks in the ship, and it doesn’t care what side of the law any of its victims are on.

Discussing “Project Wolf Hunting” is impossible without first bringing up the violence. The gore effects that accentuate the many brutal kills are easily the film’s most notable aspect. Limbs are separated, bones are shattered, and so much blood is spilled that it’s a wonder the ship doesn’t sink under the wet weight. And while it’s over-the-top, the violence is performed in a seemingly realistic way with authentic-looking blood and gore, accompanied by gleeful execution. The practical effects used to pull off the dismemberments and murders are extra impressive, and the action choreography ensures that each kill is unique. Even though it feels like the violence makes up half of the film’s runtime, the variety of methods used to depict the brutality of the ship’s occupants keeps it from feeling repetitive or unoriginal.

The creature called Alpha (Choi Gwi-hwa), who becomes the main antagonist about halfway through the film, is an extraordinarily nasty being. The look of the monster is effective, with eyes stapled shut and an unflinching expression. And yet, it’s still unmistakably human, making it even more frightening in its uncanny familiarity. Choi Gwi-hwa’s predatory performance helps sell just how threatening Alpha is – he stalks through the ship with top-of-the-food-chain confidence as if the shark from “Jaws” was suddenly able to board that film’s boat. Before Alpha shows up, however, the regular humans are scary in their own way. Seo In-guk turns in a particularly noteworthy performance as Park Jong-du, the ostensible leader of the criminal mutineers. He’s hardened and pitiless, posing a threat to all onboard, even those who are seemingly on his side.

While “Project Wolf Hunting” is perversely enjoyable in its own depraved way, there’s little in the way of substance to be found. A revenge plot bubbles under the surface, but it’s merely a flimsy foundation to support the weight of the primal brutality that’s easily the film’s main selling point. If non-stop gory thrills are your idea of a good time, then you’ll find plenty of gnarly carnage to appreciate here.

<b>THE GOOD - </b>Insane action and unrestrained violence help make the film a depraved and perversely enjoyable time.<br><br> <b>THE BAD - </b>There's not much in the way of substance and little meaning to be derived from the movie. It's merely a good, bloody time.<br><br> <b>THE OSCAR PROSPECTS - </b>None<br><br> <b>THE FINAL SCORE - </b>6/10<br><br>"PROJECT WOLF HUNTING"