“PORTRAIT OF A LADY ON FIRE” 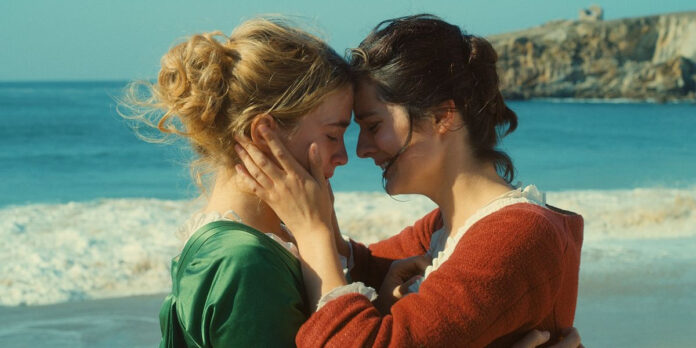 THE STORY – In 1770 the young daughter of a French countess develops a mutual attraction to the female artist commissioned to paint her wedding portrait.
​
THE CAST – Noémie Merlant & Adèle Haenel

“Portrait of a Lady on Fire” is a spell-binding, heartbreakingly beautiful lesbian romance that examines the connection between an artist and their muse. Once the relationship between painter and subject turns passionate, only then can Marianne capture Héloïse’s likeness on canvas. In addition to its exploration of love and art, the film also is an interesting look at female friendship and the plight of women in eighteenth-century France. With gorgeous cinematography, a beautiful script that shows off the French language at its very best, and great performances, Céline Sciamma’s new film is easily one of the best of the year.

When young painter Marianne (Noémie Merlant) is hired to paint the portrait of a woman, a portrait that’s to be sent to her fiancé, Marianne is somewhat surprised to hear that she will be posing as her companion. The subject of the painting, Héloïse (Adèle Haenel), is opposed to her upcoming marriage and has refused to pose for painters. Her mother (Valeria Golino) suggests that Marianne spend time with her daughter on daily walks and paint her from memory. However, when the Countess travels to Italy, the two girls bond, spending time together along with the maid Sophie (Luàna Bajrami). A whirlwind romance between Marianne and Héloïse unfolds on the isolated island in Brittany and Héloïse’s pending engagement can almost be forgotten.

Both the direction and the script by Sciamma are exquisite. The language of the film manages to be both simple and poetic. While the translations to English definitely bring across its beauty, it’s especially a treat for anyone who can understand the French language being spoken. Along with the Queer Palm, the film won the Best Screenplay Award at this year’s Cannes Film Festival and it’s easy to see why. It never once feels wordy, almost to the point of feeling minimalistic, but it builds the relationship between its two leads flawlessly. Some could dislike that it leaves much to the imagination, from Marianne’s backstory to what Héloïse’s marriage ends up like, but that’s part of the simplistic beauty of it.

Sciamma’s direction is equally powerful. The film manages to be incredibly intimate in such a grand setting; the narrative taking place in a grand house and a sweeping beach landscape shot on location in Brittany, France. Every single minute of its two-hour runtime feels purposeful; there’s not a moment that could be cut, nor does it feel that more should be added. It’s also a decidedly feminine film in its tone and point of view. Not only are there few men, but it’s easy to sense that it was written and directed by a woman in the way it allows these women agency and the nuanced way it approaches a character’s abortion.

There’s a scene in the film in which Héloïse reads the story of Orpheus and Eurydice to Marianne and Sophie, and the three debate what caused Orpheus to turn back and look at his lover on his way out of hell. This Greek myth is having a major moment in popular culture right now between this film and the Broadway musical based on it, “Hadestown,” which swept the Tony Awards in June. The question of why Orpheus turns back is clearly one that continues to fascinate audiences today, just as it fascinates Héloïse, Marianne, and Sophie. Yet in “Portrait,” it also gives us insight into Héloïse and Marianne’s relationship.

It’s always refreshing to see a lesbian relationship onscreen in which neither character dies or meets a tragic end. One thing that characterizes this film is the choices that women are allowed to make. Even though Héloïse is intended for a marriage to a Milanese man that will help her family’s circumstances, Sciamma allows her and Marianne to have their relationship on their own terms. It’s also a relief to see a lesbian relationship that is portrayed frankly, instead of being coyly hinted at. The passion between the two women is tangible and clear on-screen. It’s no wonder that the film won the Queer Palm.

As a former history student, I thought it was wonderful to see a female painter portrayed on-screen. There were women in eighteenth-century France who made their living as artists, though they were, of course, rare. Most notably, Vigée Le Brun, who was a prominent portrait painter in the late eighteenth-century largely known for her paintings of Marie Antoinette. It allows a great contrast in the film between the aristocratic Héloïse, who for all her privilege is bound to marry where her family dictates, and Marianne, who is able to work for her living and eschew marriage.

The film is anchored by its strong performances from all four of the featured women. While there are other people seen in the film, it largely revolves around Héloïse, Marianne, Sophie, and Héloïse’s mother. Golino presents a countess who is dignified, but clearly desperate to ensure her family’s future, and is marked by restrained grief after the death of her eldest daughter. Merlant and Haenel bring a quiet intensity to the roles of Marianne and Héloïse, feeling perfectly in line with their period surroundings while also strikingly modern in their longing for control over their own lives. They have beautiful chemistry together and with Bajrami as Sophie, who is a down-to-earth presence in the film and completes the trio perfectly.

The film is gorgeously crafted and has one of the most beautiful aesthetics seen this year. It’s the sort of film that you wish you could live in. The cinematography by Claire Mathon is top-notch and deserves a nomination at the Oscars. From her intimate shots of the two women to the way she utilizes the beach and cave, her work is superb. The film is absent of score but contains a beautiful vocal piece composed by Jean-Baptiste de Laubier (also known as Para One) and Arthur Simonini and elegant costumes by Dorothée Guiraud. The green dress that Héloïse is painted in is almost reminiscent of an eighteenth-century version of that green dress from “Atonement” (the highest compliment I know how to give a costume).

“Portrait of a Lady on Fire” stays with the viewer long after watching it. Weeks later, I find myself contemplating what it has to say about the artist and their muse, women’s ability to make their own choices, and love stories that don’t have a chance to continue. The film feels very French but is still very accessible to American and other non-French audiences. Above all, “Portrait” is the sort of film about women that truly understands them, due largely to Céline Sciamma’s brilliance.