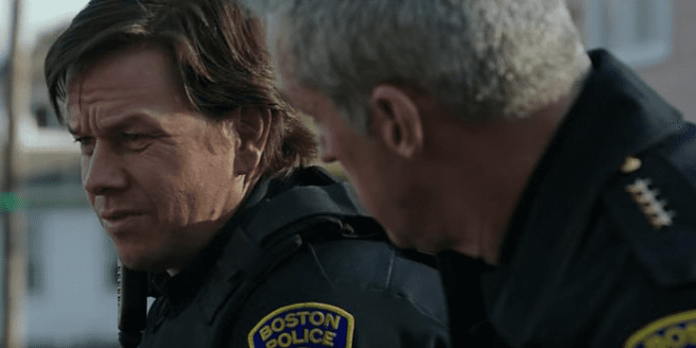 THE STORY – In 2013, the Boston Marathon erupted into chaos when a bomb exploded along the course. This is the story of what happened that day and how the FBI, local police, state police and local first responders worked together to track, identify and apprehend the suspected bombers.
​
THE CAST – Mark Wahlberg, Kevin Bacon, John Goodman, J.K. Simmons & Michelle Monaghan

Peter Berg and Mark Wahlberg may just go down in cinema history as one of the many great screen pairings of director to star. From Scorsese and DiCaprio, to Michael Fassbender and Steve McQueen, Wahlberg and Berg have carved out a fine piece for themselves where they are the kings currently at telling true stories ripe with patriotism, heroism and sentimentality. I am happy to say that “Patriot’s Day” is their finest film collaboration yet. Wahlberg actually gives a strong performance (At times) while Berg’s direction is finely tuned and powerful. Some may complain that “Patriot’s Day” is a little too overbearing at times in an eye rolling sort of way with how thick Berg lays on the emotion (There were multiple tear inducing moments throughout) but if you have even an ounce of patriotism, or even goodness in you, you cannot help but be swayed into liking this film.

On April 15th 2013, two young men detonate pressure cooked bombs which detonate near the finish line of the Boston Marathon. Sergeant Tommy Saunders (Mark Wahlberg) gets caught up in all of the terror and confusion as he and dozens of others rush to the aid of those that are effected by the bombing. Boston Police Commissioner Ed Davis (John Goodman), FBI Agent Richard DesLauriers (Kevin Bacon) and Governor of Massachusetts Deval Patrick (Michael Beach) coordinate their teams to find the two bombers before they can strike again. Meanwhile the two bombers, Dzhokhar Tsarnaev (Alex Wolf) and Tamerlan Tsarnaev (Themo Melikidze) try to make their getaway through Watertown, en route to New York City with a hostage in their grasp (Jimmy O. Yang) and Police Sergeant Jeffrey Pugliese (J.K. Simmons) standing in their way.

“Patriot’s Day” showcases all of Peter Berg’s strengths as a director: action set pieces with clear geography, moments of tension, solid pacing and getting a true story right, down to the last detail. And I mean, down to the last detail. “Patriot’s Day” is a re-telling of true events as a procedural and every piece of information, from security camera footage, to eye witness testimony to exact dates and times, helps to put the viewer in a “you feel like you’re there” mindset. The one thing that Berg does here that a lot of other directors sometimes don’t know how to get right in stories such as this (And Berg himself has even failed at this sometimes in his previous films) is telling an ensemble piece where we the audience get just enough information, backstory and character traits, to make us care about the characters. Some of these moments may feel manipulating to some, especially moments involving Wahlberg’s character, but it works very well here with credit due to the people of Boston. Whether Berg used convincing actors or extras, the effect that one feels while watching this film is apparent: Berg understands and captures Boston and its citizens truthfully. This degree of verisimilitude all helps in making the film feel almost documentary-like at times.

Other than the misinterpreted overuse of sentimentality (The ending titles sequence feels like it’s never going to end), there are two other glaring issues with this movie. As stated before, Wahlberg’s character can be a bit too distracting at times. I understand he is the star of the film but as much as this film won me over, I could not help but wonder what business Wahlberg’s character had being a part of certain scenes or moments. The other issue lies with some of the film’s dialogue, which can be a bit too on the nose at times and while this more stripped down (And f-bomb laced) version will work for a mass audience, it would have been interesting to see a more mature screenplay match the film’s tight direction.

The technical elements of “Patriot’s Day” are also all top notch. From the film’s brisk editing, to the clear shaky handheld camera style and the absolutely excellent sound work, “Patriot’s Day” is a finely crafted film backed by an atmospheric piano based score from Trent Reznor and Atticus Ross. The film seeks to tell a story about love vs. hate (And yes, this is also backed by an on the nose monologue from Wahlberg), good vs. evil and does so with confidence and respect to those who were affected that day in Boston on April 15th 2013. It is, in my opinion, Peter Berg’s best film yet as a director and one of Wahlberg’s strongest. It’s a love letter, not just to the people of Boston, not just to the citizens of America, but to all of those fighting evil and injustice everywhere around the world.