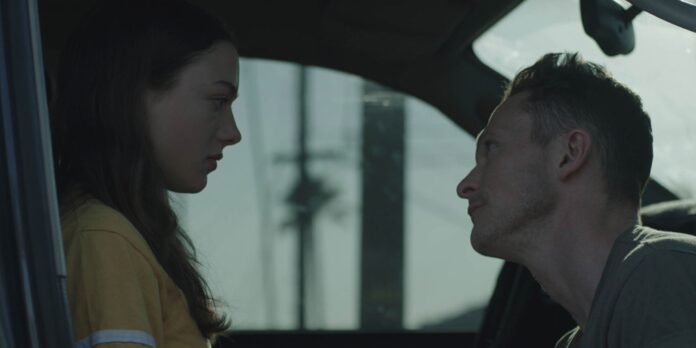 THE STORY – Increasingly dissociated from lazy, drunken hangouts and perfunctory hookups with her immature peers, bored, aimless 17-year-old Lea is intrigued by older-man Tom after he rescues her following a reluctant dine-and-dash at a local diner. Initially wary, Lea finds that Tom’s focused attention fills a deep, unspoken need, and Lea’s investment in their relationship quickly supplants her already tenuous ties to her distracted single mom and loose-knit friend group. But Tom’s initial patience and willingness to let Lea take the lead gradually gives way to a dynamic in which the awareness of the power he holds is distressingly clear.

“Palm Trees And Power Lines” may be the most polarizing film that showed at the 2022 Sundance Film Festival earlier this year. With a tough subject matter at the forefront of the film’s main storyline, it is easy to see why some audience members would be hesitant to check this one out. As a film that deals with the issues of the power dynamics in a sexual relationship between a 17-year-old and a 34-year-old, it does not add much to a conversation that has already had so many stories already told about it. There is nothing new here, and given how traumatizing the material may be for some viewers, it is fair to question why the film exists in the first place. However, when a filmmaker handles a subject matter such as this as tastefully and as well as Jamie Dack does with “Palm Trees And Power Lines,” it can be a powerful reminder and, in some cases, an eye-opening experience.

Director and screenwriter Jamie Dack does not sugarcoat the dangers of a relationship like the one Lea (Lily McInerny) finds herself in with Tom (Jonathan Tucker). The pacing may be unhurried, but that creates the necessary emotional impact when the hard-hitting final act occurs. The audience is given time to follow Lea, place themselves in her shoes, see the group of people that she associates with, and understand how a misguided 17-year-old could find comfort in someone that gives her attention. The slow burn also helps to reveal the warning signs of Tom’s actions slowly to both Lea and the audience. The direction throughout is strong, but Dack’s screenplay is the film’s true highlight. Starting from how Lea could find herself safe with him when he defends her in a conflict, there are little moments within the screenplay that showcase Tom’s control over her, which becomes more dangerous and terrifying as the story progresses.

As well-intentioned as Dack’s storytelling is, it will fall apart if the leading performances are poor. Fortunately, that is not the case here, as both performances by McInerny and Tucker are excellent. Having only been featured as a backing role in Elton John’s “Tiny Dancer” music video before this, McInerny gives one of the undersung breakout performances of the year and has undoubtedly made a name for herself with this astonishing portrayal. On the other hand, Tucker has had quite a career up until this point, and his appeal helps create a persona for Tom that is easy to be attracted to at first. Tucker’s performance gives his character extra layers as he shows a more sinister side to Tom than what is initially visible, making the performance all the more convincing due to how authentic it comes across.

“Palm Trees And Power Lines” is a film that is hard to recommend to people, given the difficult subject matter of watching a young woman slowly fall for a man who is not everything he initially presents himself to be to her. We know how this story will go, and it is one that I will probably never revisit due to how upsetting ti can be. It certainly is not an easy watch, and there are plenty of reasons why the film does not work for some. However, painstaking care is taken to ensure Lea’s character is fleshed out and the story is shown from a female’s perspective. It’s an admirable effort, even if the story is depressingly predictable. The slow-burn pacing and respectful handling of this particularly distressing and sensitive subject matter make “Palm Trees And Power Lines” one of the best at telling a familiar but vital story. Now that it’s nominated for four Film Independent Spirit Awards, more people will likely watch it, decide for themselves how they feel about it, and will hopefully make a difference in how perceptions on the issue of inappropriate relationships are discussed rather than what some male-made films have inspired over the last couple of years.

<b>THE GOOD - </b>The slow pacing helps to create tension within this story, and screenwriters Dack and Findlay handle the challenging subject matter tastefully. The two lead performances from McInerny and Tucker elevate the strong screenplay and develop the relationship.<br><br> <b>THE BAD - </b>This subject matter has been told numerous times, and the film is a tough one to recommend watching. This film adds nothing that has not already been said, which some may find unnecessary to see again.<br><br> <b>THE OSCAR PROSPECTS - </b>None<br><br> <b>THE FINAL SCORE - </b>7/10<br><br>"PALM TREES AND POWER LINES"