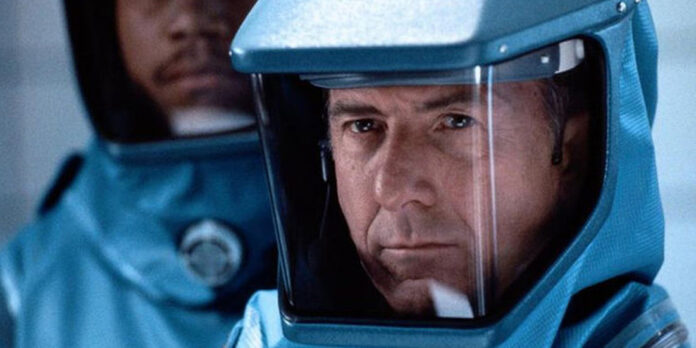 ​THE STORY – A dangerous airborne virus threatens civilization in this tense thriller. After an African monkey carrying a lethal virus is smuggled into the U.S., an outbreak occurs in a California town. To control the spread of the disease, a team of doctors is brought in that includes a contagious disease expert (Dustin Hoffman) and his ex-wife (Rene Russo). Once the Army intervenes to handle the situation, though, the doctors must fight against the clock to save the town and its residents.
​
THE CAST – Dustin Hoffman, Rene Russo, Morgan Freeman, Donald Sutherland, Cuba Gooding Jr., Patrick Dempsey & Kevin Spacey

If I told you that in 1995, Hollywood decided to make a thriller about an airborne virus that comes to America on the back of an African monkey, you could probably picture “Outbreak” in your head almost exactly as it exists: A prologue set 30-ish years in the past that establishes that someone definitely knew about the virus long before it ever came here; a cast that includes Dustin Hoffman as the hero, Rene Russo as the girl, Kevin Spacey as the sardonic one, and Donald Sutherland as the villain; a government conspiracy involving the military; Morgan Freeman and Cuba Gooding Jr. on hand to counterbalance the racism inherent in the plot; a highly unlikely chase scene (here in helicopters); Wolfgang Petersen in the director’s chair. “Outbreak” is the very picture of a mid-90s disaster thriller – with all the good and bad that entails.

“Outbreak” moves with almost clinical precision. All the pieces are laid out with ruthless efficiency in the first ten minutes or so, and you don’t even need to watch the rest of the film to know how they all fit together. It’s obvious even from just the film’s premise where this is all going, so the film needs to bring a lot of pyrotechnics to the table to rise above and get the audience invested. Hoffman does most of the heavy lifting. In a screenplay populated entirely by two-dimensional types, he practically vibrates with crusading energy as the guy who will defeat this thing, but he’s stymied by the bureaucracy and ass-covering of the U.S. government and military at every turn. Freeman and Sutherland both underplay their military bad guy roles, to mixed results. Freeman manages to deepen his character, but Sutherland is a blank slate where a fun, love to hate villain should have been. Russo gets saddled with the time-honored “divorced wife of the hero” role, and she tries her best to add some tart flavor to her screentime, but the script completely fails her in the last act.

Petersen’s direction at least keeps everything moving at a good pace and delivers one truly great scene sure to induce paranoia in even the least hypochondriac viewer. As a man we know has the virus starts coughing in a movie theater, we zoom in on all the little particles floating around in the air – hundreds, thousands of them – and follow them around to people’s hair, clothing, food, hands, and open mouths. Even in the age of COVID-19, when we are all told of the importance of social distancing daily, this bit of movie magic is chilling. But that’s the only bit of vision in the whole film which plays every single one of its predetermined story beats generically, never once offering us an interesting angle or a cunning twist.

What Petersen does provide is some solid thriller filmmaking – a few scenes that go for the audience’s collective jugular with fine-tuned precision. It’s good at everything it needs to do, but never even tries to reach further. It’s chilling to note that the film’s story is just as possible now as it was back in 1995, especially since we’re living amid a viral pandemic during which our government has failed us in numerous ways. The grim solemnity of it all hammers that home which means this is even less fun to watch now than it was back when it was originally released. This isn’t to say that “Outbreak” is no fun to watch, but more fun would have made this a less generic viewing experience.