Our Reactions To The 2018 BAFTA Award Winners 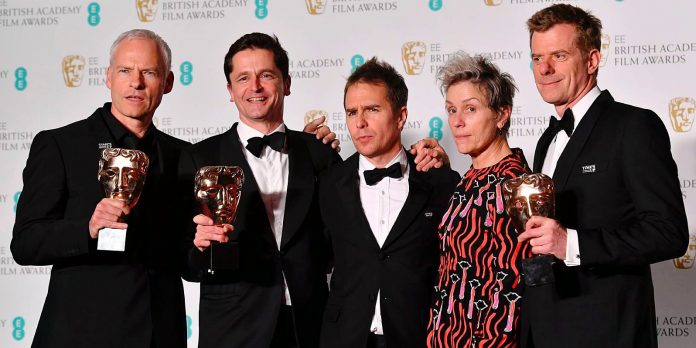 ​We’re in the home stretch! The 71st BAFTA Awards were announced on February 18th. These are the final major precursor awards. Now, there’s nothing much stopping us from locking in our final Oscar predictions. The Academy Awards are two weeks away! Let’s take a look at how the BAFTAs could affect the Oscars.

“Three Billboards Outside Ebbing, Missouri” won Best British Film, along with Best Film. Ironic, since it’s a film set in America. Since Best British Film was revived in 1992, only one other film has won it and Best Film: “The King’s Speech.” We’ll dive into Best Film a little deeper later on.

In the other BAFTA-only categories, Daniel Kaluuya won the Rising Star Award, beating out fellow Best Actor nominee Timothée Chalamet, among others. Outstanding Debut By A British Writer, Director, or Producer went to Rungano Nyoni and Emily Morgan for “I Am Not A Witch.”

Best Film Not In The English Language was an oddity, as three of the five nominees qualified for last year’s Oscars. “The Handmaiden” won, beating last year’s Oscar winner “The Salesman” and current Oscar nominee “Loveless.” Similarly “I Am Not Your Negro” won Best Documentary after being nominated at last year’s Oscars. “Icarus” was the only current nominee also nominated here. When it comes to these two categories at the Oscars, having seen the films is going to be key to understanding how the Academy might vote for the winner.

In the categories with more overlap with the Oscars, there were a few categories mostly locked up going into the BAFTAs. With their wins at BAFTA, these locks got even more locked in. Let’s start with acting…

In their entire history, the Critics’ Choice, Golden Globes, Screen Actors Guild, and BAFTA Awards have never agreed 100% in all four acting categories. As crazy and unpredictable as this season is, it appears that we have one of the most predictable acting races ever. Sam Rockwell, Allison Janney, Gary Oldman, and Frances McDormand all won in their respective categories. For anyone else to win in any of the acting categories would be an unprecedented upset. In such a strange year, could the Oscars pick a winner who didn’t win a single major prize?

And no one is stopping James Ivory from winning Best Adapted Screenplay for “Call Me By Your Name,” that’s for sure. With BAFTA, Critics’ Choice, and WGA behind him, he should feel very confident and we all couldn’t be happier to see the legendary filmmaker finally receive his overdue awards recognition.

Though he’s certainly not considered a lock at this point, it’s been a great weekend for Roger Deakins. He won Best Cinematography at BAFTA and from the American Society of Cinematographers for his incredible work on “Blade Runner 2049.” He’s now won four of each of those awards, but he’s only won both in the same year one other time, for “The Man Who Wasn’t There.” Of course, he lost the Oscar that year to a Best Picture nominee “The Lord Of The Rings: The Fellowship Of The Ring.” This could finally be the year he wins his Oscar, but it’s not guaranteed as he’s going up against other Best Picture nominees such as “Dunkirk” and “The Shape Of Water.”

There weren’t ultimately many true surprises, but “Baby Driver’s” win for Best Editing is significant. The last Oscar winner for Best Editing that wasn’t a Best Picture nominee was “The Girl With The Dragon Tattoo.” Tying “Dunkirk” at Critics Choice and now with a win here, “Baby Driver” could be next. We saw last year how BAFTA helped us to see that “Hacksaw Ridge” was heading for a Best Film Editing nomination and they also helped us out another time recently when they also chose “Whiplash” as their winner. Still, it’s best to probably go with the Best Picture nominee, Critics Choice and ACE-Winning (Which “Baby Driver” lost to “I, Tonya“), “Dunkirk.”

Finally, we come back to “Three Billboards Outside Ebbing, Missouri.” In addition to winning two acting awards and Best British Film, Martin McDonagh won Best Original Screenplay. This category is decidedly harder to predict than Adapted. McDonagh also won the Golden Globe, but Jordan Peele’s “Get Out” script won WGA (Where McDonagh was not eligible) and Critics’ Choice. Would Martin McDonagh have won the WGA if he was eligible? It’s tough to say as we have now see the two screenplays compete against each other at BAFTA and Critics Choice and seen two different results. More on this in another article…

Clearly, the BAFTAs loved “Three Billboards Outside Ebbing, Missouri,” awarding it Best Film. This was the first Best Director/Film split at the BAFTAs since 2013, despite becoming more common at the Oscars. It seems like it will ultimately come down to whether the Academy loves the movie as much. It’s been racking up wins all season, so clearly the film is beloved, despite how it many may feel on the internet and on Twitter. After winning SAG Ensemble and multiple Globes, its chances of winning Best Picture seem more likely. Of course, the lack of a Best Director nomination is significant and with such a divisive reaction, it’s possible the preferential ballot could be the film’s downfall. One thing feels certain though, after being shut out at both Critics Choice and now BAFTA, it looks like “Lady Bird” is out of the conversation regarding Best Picture (Unless it pulls a “Grand Hotel” and wins Best Picture…and only Best Picture) and it will be between “Three Billboards Outside Ebbing, Missouri” (SAG, Golden Globe & BAFTA winner) and “The Shape Of Water” (Critics Choice, PGA & DGA winner) with “Get Out” (DGA first time, WGA winner and Critics awards leader) as the spoiler. Right now “The Shape of Water” has greater odds to win as Best Picture…but who knows in this day and age. In a world where we all thought “The Revenant” was going to win post BAFTA and “Spotlight” won and then the folliwing year the same thing happened with “La La Land” and “Moonlight,” you just can’t tell for sure anymore.

The BAFTAs reinforced some locks and reinforced the “Three Billboards Outside Ebbing, Missouri” love. Just how many surprises are we in store for at the Oscars? Can “Three Billboards Outside Ebbing, Missouri” win on a preferential ballot? All our questions will be answered in just two weeks. Stay tuned for even more in-depth analyses of all the categories as we gear up for the Oscars.