“ONE FOR THE ROAD” 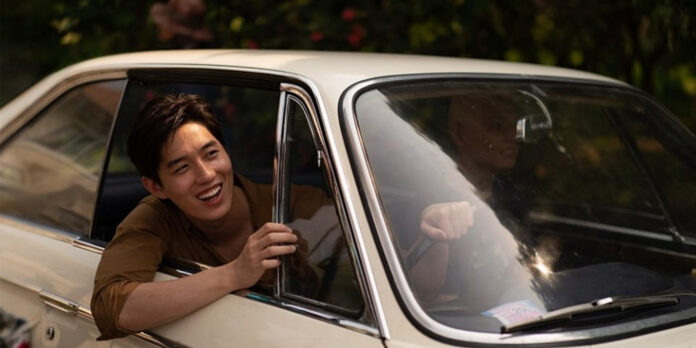 THE STORY – Boss lives a seemingly charmed life as a popular bartender in New York City, with an endless line of female customers after hours. One night, his estranged friend Aood calls from Bangkok with the news that he’s dying and asks Boss to come home. As the two travel down memory lane throughout Thailand, returning items to Aood’s exes, their pasts and reasons for their broken brotherhood are exposed. But Boss doesn’t know the whole story, and when Aood has one last gift to return, it might destroy their relationship forever.

​​​​​After working for three years under the tutelage of master director, Wong Kar Wai, director Baz Poonpiriya has made what he feels is his most personal film yet with “One For The Road.” That sentiment certainly comes across as Poonpiriya tells a sprawling story of two men’s friendship that spans years and continents. It’s an exciting film that puts Poonpiriya on the map as a director to watch now that he feels he has come into his own. Hopefully, he can deliver more fully realized cinematic experiences such as this in the future. It will also elicit passionate responses from those who are lucky enough to see it.

Boss (Tor Thanapob) is a 30-year-old bar owner living in New York City who spends most of his time hooking up with women who come to his bar when he’s not busy pouring drinks for them. Originally from Thailand, Boss receives a call one day from an old friend named Aood (Ice Natara). Aood regretfully calls Boss to tell him he’s sick with stomach cancer and does not have much time left to live. He has a list of things he wants to do before he dies and needs Boss’s help to complete it, including visiting past girlfriends and other people he feels he has wronged in his life. Boss travels back to his hometown and barely recognizes his friend, who is now bald and gaunt due to his illness. As the two drive through the country, an old secret is revealed regarding both men’s past, which threatens to undo their friendship but may bring them both the closure they’re so desperately seeking in their lives.

A patient and brilliant piece of storytelling, Poonpiriya’s latest film (which he co-wrote with Nottapon Boonprakob & Puangsoi Aksornsawang) veers off course mid-way through the runtime and one begins to wonder, “Why is this happening? Why are we spending so much time on this? What happened to the other part of the story?” Give it time. “One For The Road” carefully lays out all of its pieces and when it finally all comes together, the result is so satisfying that it will surely make up for any initial confusion that may come before it. It’s one of the best crowd-pleasers you are likely to see in 2021, making for one unexpectedly emotional experience.

I say unexpected because the first half of the movie is stylistically a little all over the place. Poonpiriya deploys several cinematic techniques, including slow-motion, rotating camera moves and popular songs by Elton John (“Tiny Dancer”), The Rolling Stones (“Time Is On My Side”) and Supertramp (“Dreamer”), that when the film starts to become more grounded in its second act, it feels at odds with all of Poonpiriya’s previous decisions. However, he never loses sight of his characters and the performances from Tor Thanapob, Ice Natara and Violette Wautier (playing an old girlfriend of Boss’s) are all perfectly modulated to sell the relatable emotions of regret and longing. Themes of friendship, loyalty, betrayal, truth, lies and love are all touched upon here and it’s a testament to Poonpiriya’s storytelling that all of them land by the film’s end without getting lost in the more theatrical moments.

Boss and Aood’s adventure is fun initially, with a number of sometimes humorous and sometimes sad run-ins with Aood’s previous girlfriends. And just when you’re settling into the film’s rhythm, Poonpiriya reminds us that one of his lead characters is dying, just as his father did before, creating an emotional undercurrent to the proceedings that sends a powerful message to all of us that we must live life to the fullest every moment that we can. Tomorrow is not guaranteed and though we don’t know what the road holds for us, we can certainly take one for the road, go down it, make mistakes along the way but eventually find ourselves right where we were supposed to be all along.