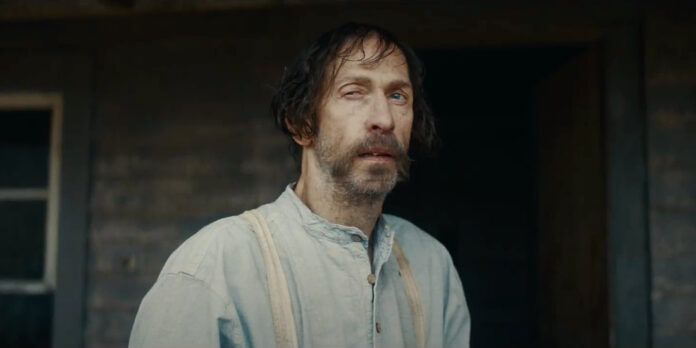 THE STORY – An action western about a farmer who takes in an injured man with a satchel of cash. When a posse comes for the money, he must decide who to trust. Defending a siege, he reveals a gunslinging talent calling his true identity into question.
​
THE CAST – Tim Blake Nelson, Scott Haze, Gavin Lewis, Trace Adkins & Stephen Dorff

I’ve seen far too many films that start with such promise and fizzle out by the time they’ve clocked an hour onto the runtime. It’s quite a more difficult accomplishment to start your film well enough but end it in such a fantastic way that the entire narrative that came before it is reframed and made even better. “Old Henry” achieves this rare distinction with a stunning third act that made me reassess Potsy Ponciroli’s brutal but effective western as a whole.

We find ourselves in the Oklahoma territory in 1906. Henry (Tim Blake Nelson) is an older man who’s had a host of professions all around the wild west before settling in as a farmer with his son Wyatt (Gavin Lewis). They live a quiet, solitary life until an unmanned saddled horse approaches their farm. They eventually find the rider, a man named Curry (Scott Haze), shot and left for dead. As they nurse him back to help, a collection of men led by a supposed sheriff (Stephen Dorff) are in active pursuit of Curry, who’s told Henry that he’s also a man of the law. Who should Henry believe?

This domestic Western remains small-scale and intimate for the entire film. Its minor number of locations and small cast help keep the narrative focused and emphasize the moral dilemma facing Henry. Our main character has lived for decades in a world built around only looking out for oneself and assuming the worst intentions from others. The unexpected problem that’s arrived on his doorstep forces him to face his ability to trust others. Some of the narrative choices echo the structure of tall tales, which often served as morality stories. “Old Henry” feels like the kind of story that could quickly be told around the campfire to both entertain and enlighten.

And just like any good homespun yarn, “Old Henry” has a hell of a conclusion. The narrative takes some bloody turns in the third act that I didn’t see coming at all. It was a thrillingly unpredictable path for the screenplay to take, especially for a film that up till that point had been simple to the point of bordering on unexciting. But the film’s finale helps to put everything about the film into a sharp new perspective as it only serves to strengthen the already-clear themes of the story.

As the titular Henry, Nelson is a reliably sturdy presence. He’s continuously inhabited old-fashioned roles like this well, and this performance is no different. He’s so well-suited to the character in both appearance and manner that it feels like he stepped out of daguerreotype. His voice and physicality help sell the idea of a man who’s been worn down by the frontier and truly lived a full life. And even though he’s the main character, he’s still hard to read, and his actions are difficult to anticipate. His enigmatic presence only aids in what the screenplay intends to do with his character. Dorff also makes for a worthy antagonist whose rough and tough swagger is cold-blooded, charismatic, and menacing. The build-up of his character, along with Henry’s relationship with his son and Curry, all aid in making the final-stand off as fantastic as it is.

Shot in a widescreen format that superbly captures the harsh vastness of the old American West, with captivating characters and patient storytelling that builds to a satisfying conclusion, “Old Henry” really took me by surprise. While I wasn’t entirely along for the ride for most of its runtime, it turned out to be the special kind of film where its conclusion recontextualizes everything that came before it. With this narrative accomplishment being as rare as in film, I have to applaud this particular slice of western genre entertainment for doing it with aplomb.