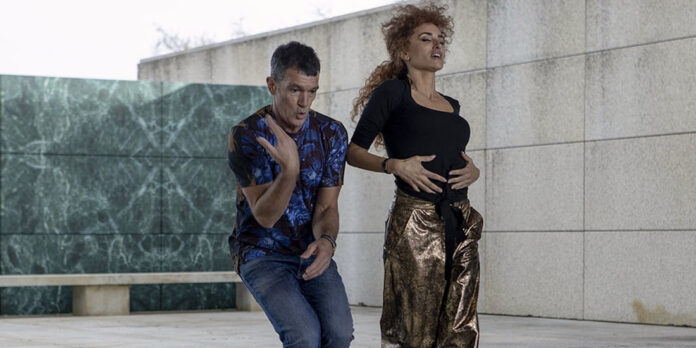 THE STORY – In search of significance and social prestige, a billionaire businessman decides to make a film to leave his mark. To do so, he hires the best: a stellar team formed by famous filmmaker Lola Cuevas and two renowned actors, both enormously talented, but with even bigger egos: the Hollywood actor Félix Rivero and radical theater thespian Iván Torres. Both legends, but not exactly the best of friends. Through a series of increasingly eccentric challenges set by Lola, Felix and Iván must face not only each other, but also their own legacies.
​
THE CAST – Penélope Cruz, Antonio Banderas, Oscar Martínez, José Luis Gómez, Nagore Aranburu, Irene Escolar, Manolo Solo, Pilar Castro & Koldo Olabarri

​​​Creative folks are the easiest to tease. So much of the artistic process, regardless of the medium, often requires doing ostensibly silly things in order to fulfill one’s passion. “Official Competition,” the new satirical comedy from Mariano Cohn and Gastón Duprat, makes fun of pretentious film actors and directors, both those who seek prestige and affection in a way that distracts from the art being created and the ones who take the construction of film arguably too seriously. The fact that the directing duo cast such esteemed actors shows that they clearly respect those that work in film, and the actors involved are obviously game to poke fun at themselves. It is a bitingly funny journey through the filmmaking process.

An aging businessman suddenly decides that the best way to redefine his legacy would be to produce a well-regarded movie, despite never before working in film. He recruits the eccentric director Lola Cuevas (Penélope Cruz) to helm the project. Cuevas casts two actors to lead the film as the story’s fictional brothers: the acclaimed movie star Félix Rivero (Antonio Banderas) and the commercially underappreciated but critically well-regarded Iván Torres (Oscar Martínez). Félix and Iván butt heads almost immediately thanks to their clashing personalities and differing acting methods. We follow the rehearsal process with Lola subjecting them to acting exercises that become increasingly more trying as the shoot draws near.

These acting exercises never stop being impressively varied and hilarious, which is a testament to the creativity of the screenplay. Meant to either draw the two actors closer together or bring them more in touch with their characters, they often just lead to the pair arguing with each other, having made little artistic progress. In that sense, it is a repetitive concept for a film, but it’s never not entertaining.

All three actors create fully lived-in characters, clearly drawing from their own experiences in their collective decades of working in film. I’d be curious to see if there were any specific creative figures that each of them based their performances on, namely because they’re all so specific in their characterizations. Banderas is perfect as a headstrong and cocky star. And even though he’s playing an actor that Iván looks down upon for his ability, Banderas wisely never plays an obvious “bad actor.” Martínez is delightfully annoying in his pretentiousness. There’s no end to the eye-rolling lofty thoughts he expresses, and Martínez plays him with deep pathos and respect, which keeps him from feeling two-dimensional. And Cruz is just fabulous as the nightmarishly wacky and tortured director. There is never any doubt that her strangeness is genuine – she embodies it too deeply for it to be some sort of an act. In that sense, she’s sometimes scary in her unpredictable mania. But the one consistent element of her performance is how funny she is, despite the intensity of her characterization. In that sense, it’s not too different from her Oscar-winning performance in “Vicky Cristina Barcelona.” She similarly played that character with a focused seriousness and gravitas, which only added to the overall humor of the film. There’s no knowingness to this performance, which is a brilliant decision. She’s a true delight to watch.

“Official Competition” is a cheeky, cynical send-up of obnoxious pretension in artists, showing that such behavior is often just a way for them to hide their insecurities. The rivalry between Iván and Félix is consistently amusing in the ways that they refuse to find any common ground, and it’s not made any more accessible thanks to Lola’s unorthodox methods. It’s the perfect watch for anyone who loves esteemed films but also wouldn’t mind seeing them slightly brought down a peg.