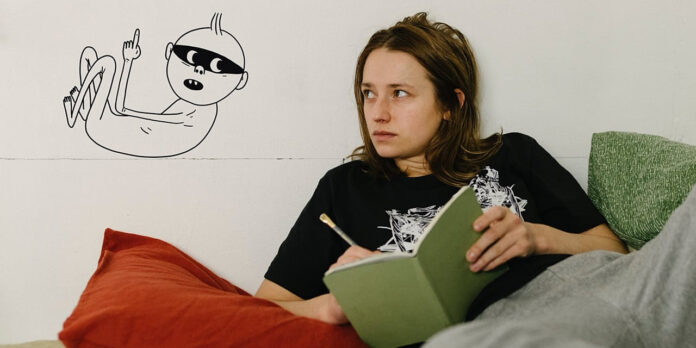 THE STORY – A baby has lodged itself unnoticed in her stomach, and if there’s one thing that Rakel knows: She doesn’t want it. The life-hungry young woman has a blooming imagination and spends time illustrating her everyday life. Hence, the Ninjababy appears as a comic figure which accompanies Rakel through the madness that is called growing up.

​​​​​​​​​​​Rakel is your typical early-20s Norwegian girl: She lives in an apartment with her best friend Ingrid, and she loves to have all kinds of fun while figuring out what she wants to do with her life (options: astronaut, beer taster, forest ranger, comic book illustrator). But that all gets upended when she learns that against all odds, she’s pregnant. Now Rakel has to figure out her life a lot faster than she planned. The plot of “Ninjababy,” adapted from the graphic novel of the same name, is by now a very familiar coming-of-age story. Still, director and co-writer Yngvild Sve Flikke gives it such personality that it feels fresh.

Despite the depressed, somewhat desaturated color palette, “Ninjababy” smartly adopts the look and feel of a graphic novel, with jump-cuts that suggest comic panels accentuating the off-kilter humor of the screenplay. The film also makes use of Rakel’s desire to be a cartoonist by showing off her drawings as animations, usually to describe her inner thoughts and feelings about the people and situations in her life but most notably in the character of the ninjababy itself. Finding out about her pregnancy well into her second trimester because she wasn’t “showing,” Rakel calls her fetus a “sneaky ninjababy,” and starts drawing pictures of a fetus with a mask, which starts talking back to her and following her around. The snarky, slightly surrealist humor of this highlights the absurdity of Rakel’s situation just enough to be enjoyable and never overstaying its welcome.

The film’s overall tone is very well-modulated, mostly thanks to the talents of the ensemble cast. As Rakel, Kristine Kujath Thorp gives a star-making performance that threads the needle of the character perfectly. The actress fully embraces Rakel’s messiness and off-putting habits while still making her someone you want to root for, showcasing Rakel’s smarts and how deeply she cares for the people in her life (even if she has funny ways of showing it). Tora Christine Dietrichson is the perfect best friend/sidekick for Rakel, a grounding presence that accepts her warts and all and knows just how much to push her. As the two men in Rakel’s life, Nader Khademi is a lovable, easy-to-root-for presence as the adorable Mos (whom Rakel initially had sex with because he smelled like butter), and Arthur Berning is hilariously self-important as the amusingly-nicknamed “Dick Jesus,” who goes on a journey of his own after finding out his most recent sexcapade with Rakel resulted in her pregnancy. Everyone in the cast is in tune with each other, building a believable rapport that makes this group of misfits feel like a real family. As a result, the film’s second half land’s emotional beats just as well as the laughs that populate the first.

There’s very little in “Ninjababy” that hasn’t been done before. It’s fairly obvious where this is going early on, and while some plot specifics may surprise, everything still ends up where you expect it will. But films are about the journey just as much as the destination, and the journey of “Ninjababy” is more clever, funny, and heartfelt than you might expect from the “Juno” meets “Knocked Up” logline. Despite looking and feeling similar to many other indie films of the past decade or so, “Ninjababy” has a real personality that shines through every frame. The film’s good-natured sardonic humor and endearing characters make it an utter joy to watch. Hopefully, audiences have taken Bong Joon-Ho’s advice about getting over the “one-inch barrier of subtitles” because this is one of the most enjoyable films of the year, one that would garner huge buzz and a massive cult following if it was in English. It deserves love regardless, especially for showing how the human experience connects us across oceans and time zones. Whether it takes place in Oslo or Ossining, “Ninjababy” is the type of film you want to enjoy again immediately after it finishes. Your move, Netflix!