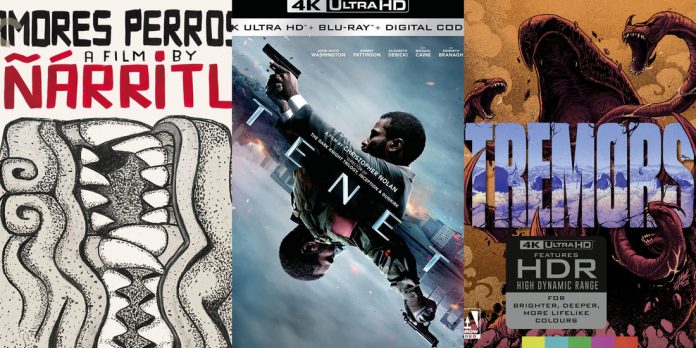 ​​Hello and welcome to another entry in what will now be a weekly segment here on the site where I do a quick overview of some of the films being released on physical media this week for Blu-ray, 4K, special editions, or boutique labels! I am a big proponent of physical media and preserving film history, on top of building my own Blu-ray collection this past year, so this will be a treat. Let’s get started!

​​In partnership with GKIDS, Shout Factory has been steadily rolling out special edition steelbooks of various Studio Ghibli films, and this week they will be putting out steelbooks for both “Castle in the Sky” and “Spirited Away.” These releases will be identical to the standard Blu-ray releases (in terms of content) that Shout Factory put out for the films back in 2017. However, they will obviously be in steelbook packaging with cover designs the pair well with the previously released Studio Ghibli steelbooks (a minimalist poster design with the title, a character or two, and a solid color background).

​Warner Archive has quite a number of releases coming out this week, most notably for me the Judy Garland technicolor musical “The Harvey Girls,” “Mister Roberts” which features Jack Lemmon’s Oscar-winning supporting performance, and Volume 2 in their “Tex Avery Screwball Classics” featuring 21 of Avery’s classic animated shorts.

Finally, Kino Lorber is putting out for the first time ever on Blu-ray this week the 1970 comedy-drama “Diary of a Mad Housewife.” Prior to this release, this film was incredibly difficult to find, both on home video and streaming. The film is most notably known for its lead performance by Carrie Snodgress, who was awarded the Best Actress Golden Globe for Musical or Comedy and a nomination for the Best Actress Oscar for the films of 1970. The release also includes a new audio commentary by screenwriter Larry Karaszewski with film historians Howard S. Berger and Steve Mitchell.

This week, I wanted to recommend a release that I picked up this year that has easily become a favorite in my collection and that is the 30th Anniversary Edition of “When Harry Met Sally…” from Shout Select. This classic romantic comedy (perhaps the best in the genre) is written by Nora Ephron, directed by Rob Reiner, and starring Meg Ryan and Billy Crystal, and it has quickly become one of my favorite films, as it is for many people. The film itself is reason enough to check out this release, but time and care were really put into giving this classic a top-notch release. While Shout Factory is typically known for cult films and horror (particularly under the Scream Factory umbrella), their Shout Select label has really become a favorite of mine with wonderful releases of classic comedies and underrated dramas from “Adaptation” and “Before the Devil Knows You’re Dead” to the “Legally Blonde” films, they put out special releases for all kinds of films waiting for that type of treatment. With this release of “When Harry Met Sally…,” it obviously looks beautiful and sounds great, but it also comes with dozens of supplemental features, including commentary tracks and interviews and documentaries on all aspects of the film. It’s also just a wonderful film to watch this time of year, showcasing the changing of the seasons in New York City and some wonderful scenes involving Christmas and New Year’s Eve. Its various shots of the city throughout fall and winter feel like a far cry from our current quarantine times but nonetheless, also feel like a warm hug and cannot help but take your breath away. There are obviously other Blu-ray releases of this film, but for my money, this is the definitive version of this timeless classic.

​So, will you be picking up any of these releases? What upcoming Blu-ray releases are you looking forward to? Are there any special releases that you asked for for the holidays? Let us know in the comments section below or on our Twitter account.