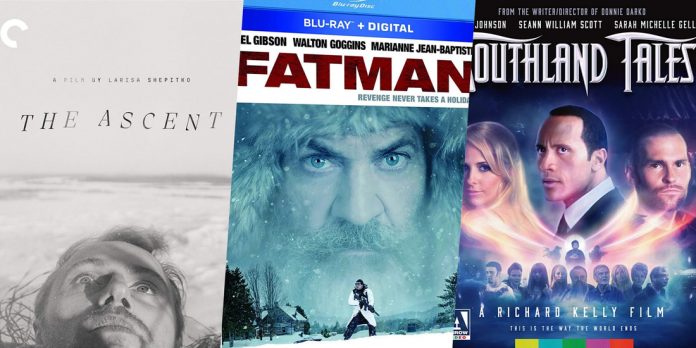 ​This week in the world of physical media, there is quite a variety of releases from various boutique labels, representing genres from cult films and kaiju to musical comedies.

​In addition to “Southland Tales,” Arrow is also putting out two boxsets for the famous Japanese kaiju films featuring the title monster “Gamera.” One set is advertised as “The Showa Era,” containing eight films from 1965 to 1980. The other contains that of “The Heisei Era” with four films from 1995 to 2006.
​

​Warner Archive is releasing several films on Blu-ray this week. Most notably, we have “After the Thin Man,” the first of many sequels to 1934’s “The Thin Man.” The 1936 comedy stars William Powell and Myrna Loy, along with an early performance from James Stewart. The release includes a new 4K restoration and era-specific extras, such as shorts and radio programs. They are also releasing “The Pajama Game,” the 1957 musical based on the same name’s Broadway show. The film was co-directed by George Abbott and Stanley Donan and was a Doris Day vehicle featuring Bob Fosse’s choreography.

This week, I wanted to recommend a unique but fun release. I’ve gone on before about my love for Shout Factory’s Shout Select label and their eclectic catalog. Still, a release that I love and appreciate is the Legally Blonde Collection, which includes both the original 2001 film and the sequel “Legally Blonde: Red, White & Blonde.” I’m a big fan of “Legally Blonde”; it is one of my favorite studio comedies of the 2000s and Reese Witherspoon gives an iconic performance as Elle Woods. I also have a soft spot for the sequel, which is nowhere near as good but has charming moments and new characters played by great actors, including Sally Field and Regina King.

The Blu-ray includes discs for both films as well as a variety of special features on each, including commentaries, interviews, and featurettes. For “Legally Blonde,” the restoration looks surprisingly great. As someone who previously had only ever seen the film on VHS, rental DVD, or cable, it was quite refreshing to see the film in nice Blu-ray quality. That attention to detail might not have been there for the disc on the sequel, but it looks fine nonetheless. I genuinely appreciate films like this that are typically considered throwaway chick flicks actually given the time and care to be released on a significant boutique label. I’m sure there are standard Blu-rays for each of these films, but I prefer shelling out more for these more high end or special edition releases and this one looks great on both a technical level and with the packaging, on top of a plethora of special features. Plus, while I may defend the sequel, I wouldn’t necessarily go out of my way to purchase a single Blu-ray of that film, but having it included with the first in such a lovely set is perhaps the best way to own. And a great way to prepare for the third film currently in development!

​
​Will you be picking up any of these releases? Let us know in the comments section below or on our Twitter account.