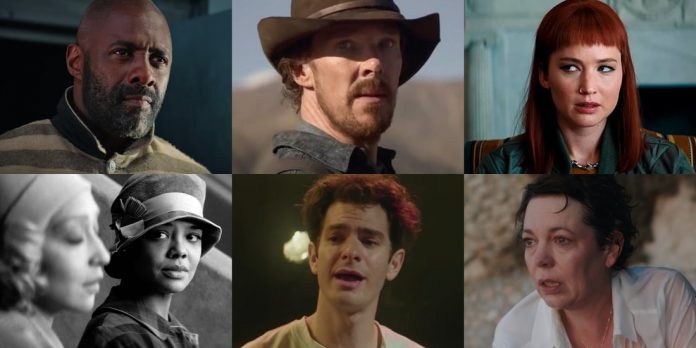 The upcoming AFI Fest will have Netflix’s “Tick…Tick…Boom!” as its opening night film on Nov. 10. This is a crucial premiere not just for the movie and potential Best Actor contender Andrew Garfield, but for the pecking order of Netflix’s award season as a whole. If “Tick…Tick…Boom!” hits it big with the AFI audiences, then streaming audiences when it reaches Netflix on Nov. 19, it could very well leapfrog “Don’t Look Up” as the second potential Netflix Best Picture nominee of 2021. Over the last few years, Netflix has reserved two Best Picture slots per year, and it would seem the first one of 2021 has already been taken by “The Power of the Dog.” This leaves several other Netflix films fighting among themselves for that second slot, and “Tick…Tick…Boom!” now has a chance to get a head start among its toughest in-studio competition.

Ever since Netflix first broke into the Best Picture race with “Roma” in 2018, it has gotten multiple nominees in each year since, as it did in 2019 with “The Irishman” and “Marriage Story,” then in 2020 with “The Trial of the Chicago 7” and “Mank.” With an expanded Best Picture field of 10, it should be that much easier in theory for Netflix to take at least two more spots in 2021. “The Power of the Dog” is all but locked into one of them already, which then leaves a crowded race for the second.

The easy favorite sight unseen is presumably “Don’t Look Up,” with Leonardo DiCaprio, Jennifer Lawrence, Meryl Streep, Jonah Hill, and many more acting out Adam McKay’s sure-to-be incendiary parable about the war on science – give or take a few COVID parallels likely thrown in. Whether Film Twitter and critics embrace or decry it as either a timely or very ill-timed firebomb, McKay may now be too much of an Academy favorite from “The Big Short” and “Vice” to be denied either way. Nonetheless, until people actually get to look at “Don’t Look Up,” it is one big question mark, as all of the other still unseen fall films. Yet, with this many stars in front of and behind the camera and this much potential to get people talking or arguing, “Don’t Look Up” has had the second biggest award season expectations for Netflix all fall behind “The Power of the Dog.” Therefore, if Netflix was to get two Best Picture nominations again, this is obviously the most likely pairing on paper.

If “Don’t Look Up” is too divisive and inflammatory for even Academy voters and McKay fans to forgive, then Netflix would have to put its faith elsewhere. This leaves “Tick…Tick…Boom!” as the Netflix film with the most potential to move up a notch, assuming it has the goods to do so. Lin-Manuel Miranda’s directorial debut is also the musical debut of Garfield as “Rent” creator Jonathan Larson. There are already high expectations for Garfield to join those fighting for the last slots in Best Actor, which would be a big foot in the door for his movie as well. If Garfield is a contender and if Netflix and Manuel pool their considerable resources on the campaign trail, “Tick…Tick…Boom!” may not just be an awards hopeful for its leading man. Should “Tick…Tick…Boom!” deliver with the AFI and Netflix audiences, it will be waiting in the wings for “Don’t Look Up” or any other presumed contender to drop off. If both make it big, it could set up a heated debate on which one will make the cut or raise the possibility that Netflix might make history with three Best Picture nominees in one year. Then again, if it couldn’t set that record in 2019, or in 2020 when “Ma Rainey’s Black Bottom” was one of the field’s most surprising snubs, it is hard to see Netflix pulling it off this time even in a field of 10.  The odds are better that “Tick…Tick…Boom!” may just be an awards play for Garfield and that “Don’t Look Up” will be a factor unless it is a significant critical bomb. But if both of them disappoint or don’t have enough to get in, then things will get very interesting for Netflix’s award season strategy. There’s no official quota that says Netflix has to get two films in, and if “The Power of the Dog” is indeed one of the top frontrunners in multiple major categories, that may make the studio happy enough. Yet just in case they want more, and just in case both “Don’t Look Up” and “Tick…Tick…Boom!” can’t get it done, then they will have to get more creative with deeper backup options.

The Gotham Awards highlighted two potential alternates right out of the gate, as the first nominations of the season were dominated by “The Lost Daughter” and “Passing.” Of course, the Gothams have a far more niche voting body than the Academy, who might not consider such films typical Oscar fare. “The Lost Daughter” explores the darkest struggles of motherhood in the past and present through Oscar winner Olivia Colman in Maggie Gyllenhaal’s directorial debut. Meanwhile, “Passing” explores the issues of racial ‘passing’ through Tessa Thompson and Oscar nominee Ruth Negga in Rebecca Hall’s directorial debut. Though both already have critical acclaim and could each get nominations for their actors and screenplays, the easy assumption is that such nominations are the best they can hope for.

They will certainly be fitting if “Don’t Look Up” and “Tick…Tick…Boom!” take up most of Netflix’s spare attention on the industry circuit. Yet if they falter and if critics push hard enough to get “The Lost Daughter” and “Passing” on the radar, beyond just Colman and Negga, then more might be possible for them. But depending on voters’ tolerance for their subject matter and on how many other late-season hopefuls deliver or disappoint, it could still be an uphill battle. As it stands, “The Lost Daughter” and “Passing” are probably fourth and fifth in Netflix’s Oscar pecking order at best, followed by the revisionist Western “The Harder They Fall,” potential Best International Film nominee “The Hand of God” and perhaps Halle Berry’s directorial debut “Bruised.” If any of them are to get higher, they likely not only need to hope “Don’t Look Up” drops down Netflix’s list of Oscar priorities, but they would need “Tick…Tick…Boom!” to drop too. Netflix was gift-wrapped two Best Picture nominations in each of the last two years, as “The Irishman’s” pedigree and “Marriage Story’s” early success made them no brainers in 2019, and “The Trial of the Chicago 7” and “Mank” were tailor-made to overcome mixed reactions from non-voters in 2020. By that measure, “The Power of the Dog” and “Don’t Look Up” were set to repeat the formula, though one already has and the other’s fate is yet to be determined. But if that fate is unfavorable, the rest of Netflix’s fall lineup will have an opening, however wide it might be.

Either way, just getting Best Picture nominations isn’t enough for Netflix, as it still looks to become the first streaming service to win the big prize. Perhaps it is an ominous sign that its odds look lower at this point than they did in 2018, 2019, and 2020, thanks in part to “Belfast” and “King Richard’s” own fast starts. Unless they stumble and unless “The Power of the Dog” proves to be more than a critic awards favorite, then the end of Oscar night will look as disappointing as the last three for Netflix, regardless of whatever other awards it might win first. By that measure, Netflix should probably put all its chips on “The Power of the Dog,” with perhaps a few to spare for “Don’t Look Up” if it is as explosive and controversial as it could be. But if it still needs a backup plan beyond them, “Tick…Tick…Boom!” could soon look like a dangerous alternate, depending on what Garfield and Miranda have composed. And in a year crowded with musicals, it could be the genre’s most prominent player with the Academy if “West Side Story” can’t capture magic in a bottle twice, if “Cyrano” is only a player for Peter Dinklage and if Miranda’s own “In the Heights” can’t rally back from some negative summer box office headlines.

Netflix is now a perennial Oscar player, even if it hasn’t taken over the movie industry like it took over television yet, and even if it is the Academy’s biggest current bridesmaid. Yet, while winning the most important movie award is still a daunting obstacle, getting contenders for them has never been Netflix’s problem. It already has one at the center of this year’s race in “The Power of the Dog,” and now it’s just a matter of figuring which Netflix film, if any, will join it in the big field of 10. “Tick…Tick…Boom!” will shortly make its case and show if the bar will become that much higher for “Don’t Look Up,” “The Lost Daughter,” “Passing,” and others to leap over later.

​How many Best Picture nominees will Netflix receive this year? Which films do you think they’ll be? Check out the NBP team’s latest Oscar predictions here. Let us know your thoughts in the comments section below or on our Twitter account.