Neo And Trinity: The Heart Of “The Matrix” 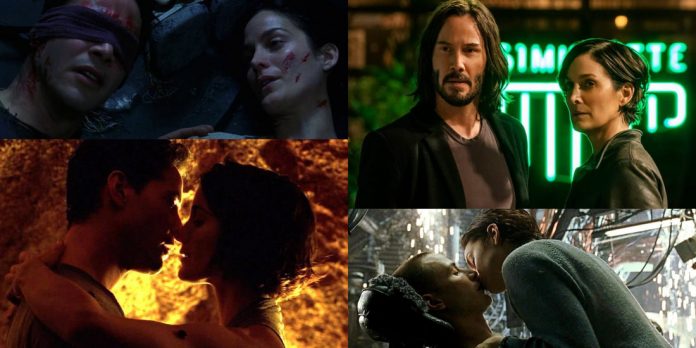 By Lauren LaMagna
​
Eighteen years after “The Matrix Revolutions” concluded the story of Neo, the crew of the Nebuchadnezzar, and the people of Zion, writer-director Lana Wachowski is back this week with the fourth installment in the franchise, “The Matrix Resurrections.” Along with Wachowski returning to the world of “The Matrix,” Keanu Reeves and Carrie-Anne Moss are reprising their roles as Neo and Trinity, respectfully. The idea of seeing Neo and Trinity, and simultaneously Reeves and Moss, on-screen again has been one of 2021’s most anticipated movie moments. But it’s important to remember why Neo and Trinity, one of science fiction’s and cinema’s most powerful couples, work as well as they do.

“The Matrix” is known for several aspects that redefined science fiction and cinema. The Wachowski Sisters utilized filmmaking techniques in a way that was never used before, provided intelligent commentary on where society was heading and asked profound questions about choice and identity. “The Matrix” is deeply philosophical and covered in symbolism and allegory. But within all of that, the Wachowski Sisters also gave us a beautiful love story underneath at all as its beating heart. It’s common knowledge that “The Matrix” is, on the surface, a commentary about humanity’s relationship with technology. However, the relationship between Neo and Trinity is a focal point throughout the trilogy and serves as the story’s emotional core. The reason why it works so well, in addition to the lightning-in-a-bottle type chemistry from Reeves and Moss, is the way the relationship is formed.

Throughout the trilogy, especially within the first film, it’s evident that Neo and Trinity’s relationship is a healthy one. Neither character, especially Trinity, by the fact of simply being a woman in a science fiction world, is ever sexualized. As an audience, we never even have this thought which has unfortunately been the fate of so many female characters within the genre. One of the many reasons for this revolutionary, nonexistent thought is the Wachowskis opening their story with Trinity. Any other director would simply start their story with the hero, not their love interest or supporting player. But by having the opening scene feature Trinity evading the Agents, the audience sees her as a fully realized individual in her own world. She is not tied to a man or viewed through a sexualized lens. Here, Trinity is a warrior, a fighter, and – most importantly – someone the audience can trust, which is utilized when Neo meets Trinity in the film. This results in the audience not seeing Trinity as a potential love interest but an ally. We already confide in her, which leads us to trust Morpheus by extension. Within the opening scene, Trinity is the hero of her own story, and through her presence, is the one to introduce the audience to the world of “The Matrix.” This shows that Trinity is never just a love interest and her purpose in the story is never just to fall in love with Neo. It’s supplementary to her character (as it is with Neo as well). Trinity’s sexuality is just a piece of her puzzle, which makes her character and the love story all the more powerful.

Throughout the first film, Neo and Trinity never really have direct romantic moments until the film’s climax. Of course, Reeves’ and Moss’s chemistry is apparent when the characters meet, but nothing goes beyond that until the film’s conclusion. At most, Trinity delivers Neo food, resulting in Cypher beginning to detect something bubbling under the surface. But that’s what makes Neo and Trinity’s relationship so dynamic – the fact that it isn’t rooted in lust. Instead, it is built out of respect and trust for one another. Trinity is the one who finds Neo and brings him to Morpheus. Neo flies under Morpheus and Trinity’s wing in the Matrix, and eventually, they work together to save Morpheus. It’s a relationship isn’t built directly on a physical connection but on an emotional one. Throughout the first film, Neo and Trinity learn to work with each other, which allows both of their guards and insecurities to fall slowly. This results in Trinity believing in Neo, thus allowing herself to fulfill her prophecy of falling in love with Neo, which in turn, will enable him to fulfill his.

A relationship with a foundation of respect is by far a stronger dynamic than one centered on physical attraction, which is why Neo and Trinity are such a strong pairing. They act more like two halves of a whole that don’t need to verbally communicate to understand the other; they simply know and support the other. They complement each other, fight by each other’s side, and will (and have) sacrifice themselves for the other. In some way, they are each other’s fuel and become something greater than themselves when they’re together. It is no surprise that their love story is one of the main elements that propel the trilogy forward since Neo and Trinity represent love at its purest forms – love at its most powerful. Neo and Trinity’s love story may be lovers in a hopeless place – a trope common in science fiction- but they embody the power of love, which is the ability to believe In your partner when they simply can’t see it. Through Neo and Trinity, the Wachowskis’ message is clear: love is humanity’s greatest tool, and it will always win.

“The Matrix” is a complex story. It’s about humanity, our relationship with technology, our ability to choose, and much more, but it’s also about our ability to love and the power of it. Neo wouldn’t have realized he was The One without Trinity, and Trinity wouldn’t have survived her fall in the second film without Neo. The two cannot exist without the other nor perform at their level without the faith and belief of their partner. The fact that they both brought each other back to life is enough proof. Within the trilogy, Neo and Trinity never dominated the other and constantly supported each other, which is why they have survived the test of time and why Lana Wachowski is making their relationship the focal point of her latest film. It will be interesting to see what she, Reeves, and Moss have in store for us with the characters of Neo and Trinity in “The Matrix Resurrections.” It’s always been a love story and we love them all for it.

Are you excited to see “The Matrix Resurrections?” How do you think Lana Wachowski is going to continue the story of Neo and Trinity? What are your thoughts on the characters and the relationship they share? Let us know in the comments section below or on our Twitter account.