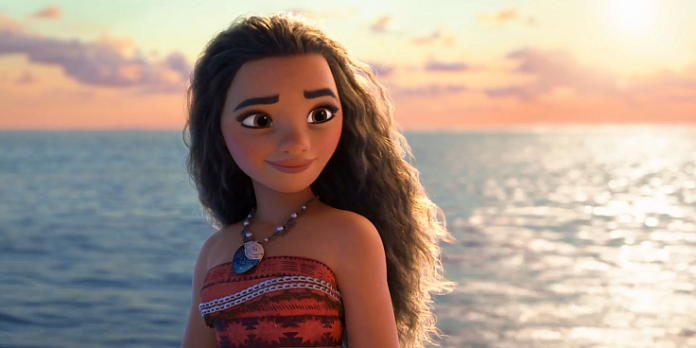 THE STORY – An adventurous teenager sails out on a daring mission to save her people. During her journey, Moana meets the once-mighty demigod Maui, who guides her in her quest to become a master way-finder. Together they sail across the open ocean on an action-packed voyage, encountering enormous monsters and impossible odds. Along the way, Moana fulfills the ancient quest of her ancestors and discovers the one thing she always sought: her own identity.
​
THE CAST – Auli’i Cravalho, Dwayne Johnson, Rachel House, Temuera Morrison, Jemaine Clement, Nicole Scherzinger & Alan Tudyk
​
THE TEAM – Ron Clements, John Musker (Directors) & Jared Bush (Writer)
​
THE RUNNING TIME – 103 Minutes

​Disney continues to redefine themselves as society changes around them, repackaging their Disney princesses for a new generation of children to look up to and inspire hope within them that anyone is capable of following their dreams and achieving their destiny. Compare this to Disney princesses of the past that functioned almost as damsels in distress for their Prince Charming and you begin to see the genius that is Disney’s “Moana.” The title character is a resourceful, strong and hopeful young woman who is in no need of a romantic love interest and anchors “Moana” in a lovable way that makes the new film completely irresistible to audiences of all ages.

A young, curious and adventurous teenager named Moana (Auli’i Cravalho) is set to be the chief of her people. However, her sense of curiosity for the ocean calls out to her from a young age and eventually she is forced to leave her island and family in an effort to save her people. She must track down the once powerful demigod Maui (Dwayne Johnson) who has the power to shape-shift into any animal with the help of his magical hook. Once she finds him, they must restore the heart of the ocean into its rightful place to stop an evil which is spreading throughout her island and endangering her people’s way of life. Before they can do this, Moana and Maui must first retrieve Maui’s magical hook so that they can work together to achieve their purpose and fulfill their destinies.

A large part of the reason that “Moana” works so well is due to the genius of Tony, Grammy, and Emmy award-winning composer, musician and singer Lin-Manuel Miranda who created the songs of “Moana.” Songs such as “You’re Welcome” and “How Far I’ll Go” are instant Disney sing-along classics, while “We Know The Way” is a rousing song with tribal influence that is insanely catchy and perfectly captures the themes of the film. Take away Lin-Manuel Miranda from “Moana” and the film would simply not work as well.

The film’s story is maybe its biggest opportunity despite it getting so many elements right. The mythical aspects of the story ignite a sense of awe and wonder in the viewer (Especially in eye-popping 3-D) but may be a tad bit too much for more mature viewers especially towards the film’s final act. Mind you, children are likely to lose their minds while watching these colorful and fantastical sequences. The tired and true formula of a Disney heroine achieving her dreams and discovering her inner strength may also bore audiences looking for a more original story. However, the concept with which the story is wrapped up and presented in, taking place on a small tropical island called Motunui and with such memorable characters gives “Moana” enough of an original spin to win over even the most cynical of audience members.

The voice acting from newcomer Auli’i Cravalho is charming, energetic and as strong as her singing voice during her main song “How Far I’ll Go.” She is steadfast and an absolute star that is never overshadowed by her animated co-star as much as he tries. Dwayne Johnson is so talented that at this point it doesn’t even surprise me that the man can actually sing quite well. As stated before, his main number “You’re Welcome” may not feature the greatest singing you’ve ever heard but Dwayne Johnson sells every beat and every moment with charisma and appeal. If I had to point out one musical number and sequence that simply did not work for me it would have to be the song “Shiny” sung by Jemaine Clement who plays a large villainous crab that loves singing about himself. The animation style and borderline ridiculousness of the sequence stand out so much that it feels like it belongs in an entirely different movie. One other character of note is the chicken played by Alan Tudyk, who may not have any lines in the film but his character’s animation style, squawking and oddball behavior is one of the film’s high points in terms of comedy (Something that sometimes lands very well and does not in others).

“Moana” is Disney’s second animated film this year after “Zootopia” and they could not be any more different from one another. “Moana” is a musical (Even though it doesn’t have nearly as many songs as I would have liked considering what we were getting so was good) and doesn’t have the biting social commentary which elevated “Zootopia” from a good Disney film to a great one. However, “Moana” has enough magic, entertainment, and soaring songs that it may very well stand as Disney’s best musical in some time (That’s right, I think it’s better than “Frozen”). With an inspiring female lead at the heart of the story, a colorful animated vision and instant classic songs from Broadway superstar Lin-Manuel Miranda, I have no doubt that “Moana” will go on to be considered one of Disney’s classics in a few years.